The Plan is a short experimental game that tells the story of a helpless, little fly at the bottom of a vast forest. Navigate with the [WASD] or [arrow] keys and, well, that's it. A side project by Krillbite Studio as they work on Among the Sleep, it's a simple idea at its surface — buzz about between branches and soak in the serene environment. Scripted events like a wayward breeze as well as other, more physical, obstacles occasionally interrupt your progress, but are fitting enough with the overall concept that they don't disrupt the flow of the gameplay. 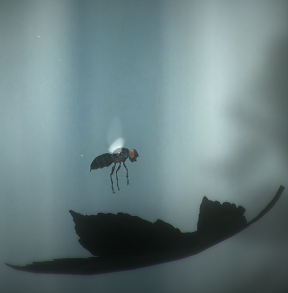 Despite the constricting invisible walls and a playthrough length around ten minutes at a leisurely pace, The Plan evokes a much greater sense of scale. Most surprising is how introspective, atmospheric, and emotionally charged it is, given its focus on a creature we often associate with poop. Initially, it appears to lack direction and a clear goal, but don't let those first few moments of aimless wandering discourage you. It's called The Plan for good reason, and discovering why leads to a whole new depth of interpretation. I won't spoil things with over-explanation, but I will tell you the two most important words you must know to fully experience this world: fly up. Fly up to witness the evolving skyscape, fly up to boldly go where no fly has gone before, fly up to find what fate has planned for you.

Sorry, this was a miss. It's pretty, but it's not a game, nor is it art. It's an excruciatingly long, boring flight up. The trip is absolutely meaningless -- there's no exploration, no discovery, no transformation, no challenge (unless you count dodging seven leaves).

And then you get the big "ending."

I disagree with Strangelander: it is art. It may not be deep and meaningful, but it looks beautiful and sounds beautiful. It also made me smile at the end.

(I will confess, though: I picked up my phone for a about a minute of the ascent.)

That the screen is constantly rising at a very slow pace, blocking your way back down. In essence, the fly is being forced to the top and to his death. If you leave your game untouched for a number of minutes, the fly will actually reach the end on its own (although you do have to free it from the spider web if it gets trapped). So when you picked up the phone, cheeken, the ascent actually didn't stop!

It then becomes clear that "The Plan" is the fly's inevitable doom. Nothing you do can escape that, not even choosing to do nothing! It's a powerful allegory of our own mortality that, as the developers describe it, "explores issues of death and meaning" and condensed into the miniature scale of an insect's lifespan, which can be as short as 5 minutes from start to end.

The end made me smile, too. I found it beautiful and artistic, which is why I was compelled to review it.

I know not everyone will agree with my assessment, but I appreciate those who keep an open mind and constructive discourse - positive or negative. So thank you both for your comments, I look forward to seeing what others took from the experience :)

I enjoyed the game for the pretty visuals and beautiful music, which actually led to a discovery once I'd completed the game.

Hoping to find out what the music was, I looked for credits, but was only led back to the title screen. Finding it at the bottom of the page, I clicked it in case of a hyperlink, but instead found that my fly was transformed into Navi from Zelda: Ocarina of Time. That wasn't enough to make me replay the game, but it WAS pretty awesome!

Leaves can carry one down further back than oneself