The Moops: Combos of Joy 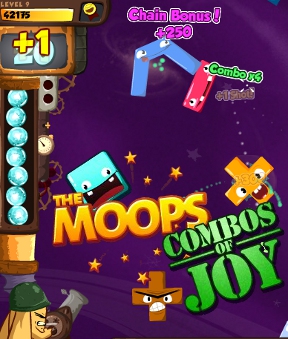 Ten HUT! Are you prepared to go out there into the colorful floating void, soldier? Are you ready to calculate angles on the fly in order to line up chain shots? Why is the ammo so limited? Do you think ammo grows on trees, soldier? No, because that's nonsense. Everyone knows that ammo is produced when you hit three or more targets with one shot. Are you sure you're smart enough to fight this war, soldier? What do you think this is, some kind of arcade game? Spreading smiles to shapes is serious business! I want you to get behind that cannon and cheer up the ever-lovin' crap out of those shapes, soldier! That's an order! It's like you think HeavyBoat made The Moops: Combos of Joy for you to have fun!

You control the cannon in the lower left corner, aiming with the mouse and pointing to shoot. Keep an eye on your ammo, on the left. Unhappy shapes will scroll down in the main window. If you hit them, they become happy. Hmm. Masochism? At any rate, they also disappear when they become happy. You can see how many shapes are left on the bottom of the screen, conveniently arranged by type. Your goal is to clear all the shapes from the level without running out of ammo. To do this, you'll need to make combos by aiming in such a way that your shot bounces off of three or more shapes in a row. You get an additional shot of ammo for the third shape and for each additional shape after three, so, if you hit six shapes, you get four extra ammo. Keep an eye out also for powerups. Not only is hitting them an instant extra shot, but they can provide boosts such as turning your gun into a laser and adding a forcefield to the right edge of the screen.

The Moops: Combos of Joy wants to be about skill, as the repeated reminders from the game to "take your time!" and "try for combos!" shows. However, the difference between a shot that ricochets expertly from shape to shape in a long chain and a shot that hits one shape before speeding off into the void can be hair-thin, and since the playing field is constantly scrolling, you don't have the ability to line up a shot like you would in most angle-centric physics puzzles. This makes The Moops more luck-based than perhaps it realizes, and that can make some of the later levels frustrating, because the ammo given per level is so low.

That said, I didn't start getting peeved at the game's expectations of godlike prowess until the 30-something levels, and even then, there was something addictive that kept me coming back. I'd close the browser window in disgust and go off about my business, and then a few hours later I'd find myself wanting to give it just one more try. It's probably the same kind of thing that sends gamblers back to the tables: it's just so euphoric when the luck does fall your way, and you preen yourself imagining that it was your cool-headed and adroit handling of things which caused that amazing run. It doesn't hurt that the game boasts a marvelous soundtrack and adorable art, either. Arcade fans should give this one a try. At least it's cheaper than Vegas.

Play the Moops: Combos of Joy

Not only did the Moops invade Spain in the 8th century, they've also made a fun little arcade game!

The music highly reminds me of Boom Blox, a Wii game.

Wow... if popcap got ahold of this game idea... I might never be heard from again. I beat every level... and lost several hours of my life.

Lol, I was hoping to see a Seinfeld reference, it was the first thing I thought of when I read the title of the game.

Wow, a puzzle game that actually encourages you to take your time! That's refreshing. I also like how your rank (gold, silver, or bronze) is based on your score and not directly tied to the number of shots you take.

I have to disagree with joye; this game is much more skill-based than most physics puzzlers I've seen. There is a fine line between the right shot and utter failure, but that just makes timing and planning shots that much more important. Not to say I haven't lucked my way through some levels, but I have rarely missed a shot without knowing it was my fault.

Excellent concept, with just enough variety to keep it from tedium. Kudos to the developers!

Somehow this game has the exact combination of elements to be addictive. I think I spent five hours working on it in one sitting.