The Misadventures of Detective Butler

Let's face it: we just don't know why groups of archetypal anime-style characters keep deciding to get together for vacations at locations cut-off from the surrounding world, or, at least, why they always seem so friggin' shocked when someone ends up dead. If you ever show up at like, a secluded mountain cabin, and the first people you meet are a clumsy maid and the gregarious dad of a disaffected slacker, I would probably just hop back on your Ski-Doo. That having been said, even if The Misadventures of Detective Butler, a free indie mystery visual novel by Goldbar Games, sticks pretty close to the model perfected by Ryukishi07, it's still quite entertaining. In 1962, a popular cruise ship shuts down after the accidental deaths of two of its passengers. Now, a half-century later, the CEO of a wealthy company has purchased tickets for his closest employees and son Gilligan to sail on the first cruise of the relaunched and remodeled relaunched ship.. On board, Gilligan happens to meet the mysterious Detective Butler and, when the two of them delve deeper into the ship's history, another incident occurs. Will our sleuths crack the case of the Maiden Voyage Murder? And more importantly can you crack it before they do? 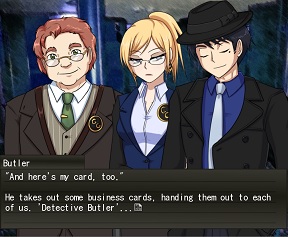 Advance through the story by clicking or with [spacebar] and [enter]. Right-clicking brings up the menu, where you can save your place in the story, adjust the settings, or review the clues you've learned so far in your journal. Truthfully there isn't much that's interactive in this visual novel, which might make it more a kinetic novel than anything else. Then again, by definition the mystery genre has always felt like a game the reader is playing against the author, and that certainly is the case here for the whole of its 3-5 hour run time. The characters in The Misadventures of Detective Butler are all pretty archetypal and seem to come with their own standard flaws. Like most visual novel protagonists, Gilligan is a real piece of work (see also: Voices From the Sea) with a dead mother introduced mostly to make him nice and angsty, Detective Butler is a little too hypercompetent in his preparations and long-winded in his explanations, and each of the suspects seem to have but one personality trait that they just decide to run with. But man, there's just something about a closed circle of people with their own intrigues bouncing off of each other until the truth is revealed that makes The Misadventures of Detective Butler hard to dislike. It really has the classic Golden Age Whodunnit feel to it, though mixed with a good amount of off-kilter plot insanity by the end. Also, the visuals and audio are impressively polished, so even if the solution to the mystery evades you, you can at least admire how pretty it is presented. While The Misadventures of Detective Butler does have it flaws, it's exciting to hear that Goldbar Games is planning a further series of episode adventures that will soon released in browser form. The team clearly has a love for the genre, and, with a little refinement, Butler could be the sleuth that armchair detectives of the casual-game-iverse have been waiting for.

Windows
Get the free full version

While the mystery itself was well composed, it took a long time to get to the more interesting parts of the game. I felt like the character building in the beginning of the game was actually pretty tedious, too long and kind of cheesy. However after the build up to the crime it was a pretty good story.

Also although this is a visual novel, it would have been cool if the player were able to try and decide who the murderer is. That little bit of interaction would be extremely satisfying to players who were able to figure it out own their own!