When you think of thieves, what do you envision? A ski mask. Black, tight clothes. Sneaking around in the middle of the night. Well, Wonderstruck's indie stealth title for PC and Mac has little of them! In The Marvellous Miss Take, you go out on the prowl as cute and colorful Sophia as she attempts to steal back the collection that was wrongfully taken by Mr. Blackstone after her art-curating aunt passes away. It's a nonviolent trek you take through dozens of art galleries and personal collections to return your bequeathed paintings and sculptures. Cause who needs attorneys and lawful justice anyway? Take the law (and your expensive, fine art goods) into your own hands! 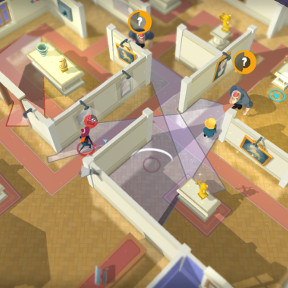 You control Sophia's every move with a click, hold or swipe of the mouse (though partial keyboard controls exist as well) as she stealthily slinks out of sight from guards, security cameras, and several other "enemies". To collect the objects you have your eyes on, simply walk by it. If a guard should catch sight of you, Sophia will need to go into hiding until the coast is clear. OR she can use one of many assorted handy-dandy devices to distract the sentries or otherwise escape them. Simply right-click and hold to throw the gadget for whatever purpose it serves. One thing you can't count on is being able to wait out the nightstick-wielding men, since their movements are completely random. Rather than a game of patience, The Marvellous Miss Take tests your ability to make quick, correct decisions else face a smug watchman while holding a "hands-up" pose.

One of the great things about Wonderstruck's creation is the depth of play available. It's much more than just playing Sophia through 25 levels of pilfering... there are two other characters available with which to traverse the same levels, but each has their own, unique goals and abilities. It's much more than replayability as these extra characters are in fact an added level of gameplay. Unfortunately, it's not all golden amulets and Monets: while the control scheme is intuitive, somewhere in there, the precision of movement was lost. With all the twists and turns at each location, being able to have more control over Sophia's every step without resorting to running would be nice. Where this game really shines is the brightness and color. No lurking in a shadowy hallway lit only by torches. That facet of stealth games has become overly commonplace, and the visual style of this title is refreshing. The Marvellous Miss Take is a stealth game that's easy for those new to the genre to pick up while the additional objectives can still give veterans a challenge for hours to come.