Let me introduce an action puzzler by Gabriel Bissonnette, The Mage. In a far away kingdom a mage found a disturbing prophecy which said that when the dark sun rises, the king will fall and only the stolen one shall shatter the blades of the night...what now? 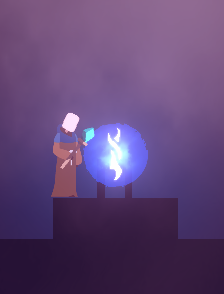 The old mage knew that being the wisest one in the kingdom, only he was capable of possession using the duality of mind and body. He decided to leave his body and save the king, and so his journey from body to body begins, leaving many deeply sleeping bodies behind.
Bodies can be changed easily, just push the left mouse button or E key, and a bright small sphere appears above the currently possesed one - the sphere is the mage's mind - and you decide where to send it. You can't return to a body once left soulless, though. Of course, it's not that easy. There are obstacles, an invisible barriers which can be overcome only in material world (later in the game they are quite many), and also visible barriers with timing.

The game is more puzzler than an action - most of all you need to think in each level about the correct order of possessing bodies. The soldiers' bodies can't do much, knights and thieves have more skills - knights can double jump and thieves climb walls. The game is controlled by WASD/Arrow keys, it has autosave and twenty levels. R key to restart. Enjoy!