Once thought to be all but a myth, Vikings have cropped up once again and this time they are under your command. The Last Vikings, by Springloaded, is labeled as an RPG but isn't really quite so. It has you building boats, gaining recruits, grooming your heroes, and of course crushing village walls, raiding their homes and marking your empire to be the strongest vikings around! This free mobile game can be played online where you can engage in PvP against your friends or strangers, or, if you'd rather just enjoy crushing your nonhuman controlled enemies in singleplayer, you can do that too. But in order to do either you must gain resources, upgrade your weapons and heroes by destroying the gate of any city you find, and then finishing off their armies within. Fight off cannonballs and sea monsters while keeping your men rowing strong, and then battle head-to-head with endless bosses to keep your viking ancestors proud. You'll have to be quick with your fingers because it's all about timing and reflexes with a little bit of strategy mixed in. 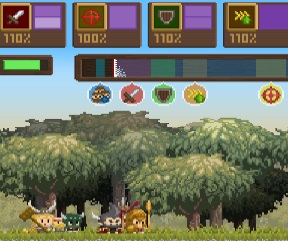 There are two parts to the main gameplay... the traveling and the fighting. When traveling in your viking boat, you must hold down the row button to make the bar move, and when it is over the speed areas or the arrows spot you release the button to gain speed. Speed hurries your boat along, and the arrows are used to fire at the incoming missiles. Whether it be a cannonball, chickens, or a dragon, all must be shot down to ensure the survival of your men and your boat. When a town is in sight, a simple tap has your men going ashore, and then attacking the front gate. When the gate is broken, you can then attack the people within in a similar fashion to rowing, but the bar moves by itself. Instead of speed or arrows, you have to choose which area to increase your men's power in attack, defense, accuracy, recruiting more men, or making the bar move faster. You only have a few chances to do this as your men are forever marching forward to meet their victims. Fighting is done automatically so all you have to worry about is building up the right stats in the short time you're given. When you increase a stat you must land on its area multiple times to increase it again, so you must quickly decide if it is worth the time to go for. There is a lot you have to think about at once in both of these scenarios, so even though the game is just this repeated it keeps you sucked in by having to be right on your toes.

The Last Vikings is all about growing stronger, getting cooler heroes, and righteous boats. In a way, the game is just grinding to get more and more, but it's never something you can play absently. It always keeps you watching close and never wanting to put it down, though eventually you'll have to as you wait to get your energy replenished. If you can't wait, you can always watch an advert to fill it all up. Adverts are also there to give you free supplies, which is used to buy upgrades. But if you'd rather not do either, then you never have to worry about a commercial. At least in my weeks of playing I haven't seen one ad yet I haven't chosen myself to watch. The game doesn't pester you either about signing up online, though there are special rewards if you do, such as special events. Still, The Last Viking does have some issues as it's pretty new. The special events haven't started yet (though it looks as if they will soon) and sometimes when the little characters on screen are telling you something humorous or breaking the fourth wall, their speak bubbles will cover up some options on the menu. But the developers are involved and are still tweaking it to make it a humorous and darling viking adventure for all to enjoy. So raise your sails and polish your historically inaccurate horned helmets for it's up to you to ensure you won't be the last viking for a long time to come.

There is enough variety in the game play choices (pvp, boat for distance, go to ports for items, land attacks, and the special events which are scheduled every couple of weeks now) that I keep coming back.

This game also appeals to the collector in me - I want all the weapons, heros, boats, and max level on it all! Each new piece is very satisfying.