The Last Ninja From Another Planet

We're just going to give you the premise of this one straight, because there's no outdoing the game itself on this one: In The Last Ninja From Another Planet, by Dharmasta Adriwara Widhayaka, you are a ninja from another planet who is the sole survivor of a massive mutant attack on your home, and you must go back in time to infiltrate a mad scientist's lab to destroy all the mutants and prevent the attack from ever happening. Phew! Once you've let that soak in a bit, you'll find that this is a puzzle game centered around slicing up everything in your path. Your ninja can stick to walls and ceilings with ease, and when you press the [arrow] keys or [WASD], he'll leap in the direction of your choosing, moving along until he hits a wall... or meets his untimely demise. He'll automatically slice-'n'-dice any monsters he comes across, so your task is to destroy them all safely without running into anything too pointy for his sword to deal with. Although the basic premise is simple, the game continuously introduces new elements up until the very end, such as mutants that can only be destroyed in specific ways, clones who follow your movement, mad ninja skillz powerups, and even a puzzle-based boss fight at the very end. 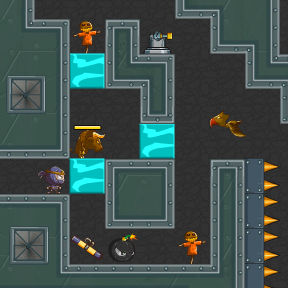 Even though it's not an action game, the sense of motion and speed here is great. The ninja travels everywhere with a satisfying "whoosh," and he'll julienne just about everything he comes across, from chopping up crates to shaving portraits bald. The puzzles are often clever, but there are nitpicks here and there, such as timing-based puzzles, which are far more fiddly than anything else in the game. Levels that rely on the "ninja clones" also tend to have more trial-and-error, since you'll have to activate them at very precise moments in the level, and if you get it wrong, you'll have to restart the whole shebang. Particularly scary enemies have an unskippable cutscene when they die, and there's a lot of blood besides. If you're the sort of person who laughs at the "Black Knight" scene in Monty Python and the Holy Grail, that's not really a drawback. If you are that sort of person, then The Last Ninja From Another Planet is right up your (probably spike-lined) alley.

Play The Last Ninja From Another Planet

Once you've got bombs & spikes it starts getting annoying. I left it there.

Is there no way of turning off the music without turning off the FX? That seems like a basic necessity in any game. FX mean a lot to me, but I cannot handle the music. Aren't lots of people like this?

Great game - nice difficult puzzles and good concept of directing multiple ninjas around the board simultaneously. Looking forward to the sequel! :)