The Last Hour of Fairfield

Valkill101's free indie horror RPG The Last Hour of Fairfield covers that well pondered question of what you would do with the last hour of your life. If you answered to try to escape the oncoming nuke by fighting your way through zombies and escaping on the last government helicopter so it's not your last hour of living life, then this has been tailor made just for you! Chose from five different characters, each with their own different fighting styles and slightly different stories, to race through the Fairfield hospital to possibly find other survivors, and escape the city before it's blown to smithereens. This isn't a Hollywood style hour where two minutes left means, no matter how long they take they'll stop it within the final seconds. Instead, this is a real world hour, with a lovely little time ticking down in the top corner of your screen. Still, the hour gives you plenty of time to explore for goodies, fight mutant dogs, solve puzzles, or even courageously run from every battle. 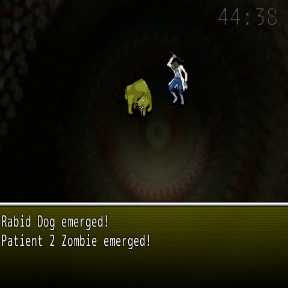 The Last Hour of Fairfield plays like most RPGs, with a menu to save in and a very normal looking battle system. The biggest difference is avoiding battles which is actually recommended by the game. These aren't your pansy little zombies, but the thick, quick, healthy ones that can deplete your small health bar in a couple of turns if you're not careful. A lot of the game becomes more strategy as you try to figure out how to dodge the approaching walking dead, and even if it's worth the risk, to engage in battle to run away, which can stun the zombies if successful. You'll have to figure out if exploring rooms is worth the potential surprise battle to get the much needed but hard to find items, at least for the first time you play through. Though it tries to play up each of the five different characters, gameplay is nearly identical. Items don't move around so you'll know exactly where to go for what items which makes the game kind of dry. Each character choice doesn't really change anything, but they add their own little flair to the game. You're probably not going to want to play through five different times, but having a choice is nice. So pick the character you have the most connection to and head to the roof because your hour is running out.