At long, long last, Jordan Mechner's (creator of the original Prince of Persia game) adventure gaming masterpiece The Last Express is available as a digital download! The game was first released in 1997 where, despite being an amazing interactive experience, it failed to gain much commercial traction. Its cult status survived the turn of the century largely due to the unique nature of the gameplay, the incredible writing, and a visual style that's more like an animated television show than a video game. No more tracking down rate copies of the original CD-ROM. Just download, install, and enjoy! 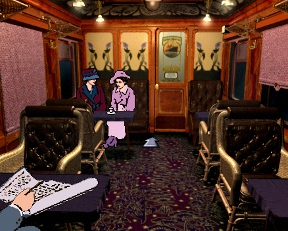 The Last Express takes place on the Orient Express days before the start of World War I. You take the role of Robert Cath, an American doctor journeying from Paris to Constantinople (Istanbul) by train. He's looking to meet his friend Tyler Whitney on board, but when you check his compartment, you find nothing but his body on the floor.

Investigating the murder will be tricky, as there are around 30 characters to interact with who use dialogue from a reported 800 page script. It's not all "point to a person, click them to talk", either, as you'll hear snippets of conversations as you walk by people, making most of your time in the game spent eavesdropping and generally snooping about.

To top it off, The Last Express takes place in real time. Or, at least in a faster version of real time. Unlike most adventure games, here you don't have the luxury of thinking out every puzzle for hours. Events happen on their own, such as passengers going to dinner in the evening, and if you aren't there to catch something at the right time, you may find yourself staring at one of the game's 30 "bad" endings. Don't worry, though, as The Last Express starts you off a few minutes before you expired, allowing you to correct your mistakes and try a new path. 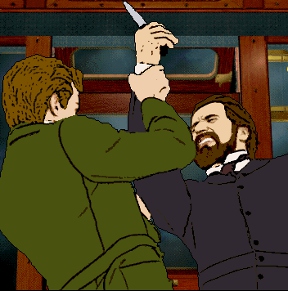 Analysis: The Last Express is one of those games everybody should play, regardless of their gaming preferences, and especially anyone who insists a video game can't be a well-written work of interactive literature. While it's usually billed as an adventure game, don't think of this as a typical "gather a bunch of items in your inventory and solve puzzles" kind of experience. Instead, approach The Last Express like visual interactive fiction, then you'll be able to fully appreciate how well-crafted the game truly is.

The visual style in The Last Express uses digitally rotoscoped animation to essentially "trace" live actors into a hand-drawn world. The end result is something almost eerily lifelike yet pleasantly engaging at the same time. The team put a lot of research into recreating the train's interior as well, going so far as to visit the last surviving car from the early 1900s to take measurements for the digital reproduction.

With each step you take, each conversation you hear, The Last Express moves its plot in a new direction, and the real time aspect of it gives each choice you make a sense of permanence. You won't feel rushed, necessarily, just more invested in the characters and where the story goes. The throwaway cast and gameplay of most modern games couldn't be more absent in The Last Express, as everything you do feels realistic and integral to how the game unfolds.

The Last Express is a masterpiece of gaming, and that's no understatement. The passion the team put into its creation is evident in every moment of gameplay, and the experience is a seamless transportation into a world of mystery. Even 14 years after its original release, The Last Express still has the ability to charm and entertain, from nostalgic old school gamers to those raised on casual hidden object games.

A demo is available for The Last Express, but it's unsupported and was designed to run on Windows 95 and DOS. Use at your own risk.

I've never had any gaming experience come as close to feeling like an interactive movie.

For its time, the save/replay system was extraordinarily advanced, too.

One thing for those who play this for the first time - it's well worth it to play it again just to listen in on or interact with the other people on the train.

Mild spoiler on gameplay, not on plot:

The realtime aspect is both a blessing and a curse. Once you know what you have to do, it can be relatively easy, but you might have to sit around for a while waiting for it to happen. Good time to catch up on the side conversations.

Shame they don't have a Mac version, though that'd probably be more work considering OS X has come since then.

Any chance this is related to the rumored movie in the works?

Well, this is a decent surprise. I think I still have the discs for this somewhere around here, and getting it to run under DOSBOX was somewhat... annoying at times, particularly at disc swapping.

The game itself is good, although some parts of it will have you ramming your head into the nearest wall, even when you know what you're doing. The action sequences don't help.

One of the major things to remember is that some of the puzzles have alternate solutions that affect later situations. The first puzzle, the corpse in the room you stay in, is a prime example - if you hide it in your bed, later you'll have to tell the attendants not to enter your room to make your bed; if you just chuck it out of the window, you'll have to find a way to avoid getting caught when a brief search for a stowaway occurs later. This also produces one of the potential headaches with the game - without a guide, you can end up clueless as to how far back you have to go to fix what you messed up.

I remember reading the review of this game in PC Gamer back in 1997 and wanting to play it. It seemed very interesting. But I never did play it in the end. I did think about it on occasion and would want to find a copy but somehow that never happened. Anyway, it is very cool that this is now available. A good excuse to stop being lazy and give it a go.

Oh man, I remember playing this game when I was younger and it is AWESOME! Every now and then I get an urge to play it again only to not be able to find it! Awesome!

A great posting not least because of a great accompanying article in the latest Edge magazine about the making of which I thoroughly recommend reading (might be online soon).

Thank you JIG for putting this post up. Truly one of the finest gaming resources on the net!

I thought The Last Express was great ... but what is it doing on a "Casual Gameplay" site?