Ben and Elizabeth were a nice young couple who had a nasty car accident. The hidden-object adventure handbook says that one of them should wake up in some backwater town, while the other one goes missing, presumably kidnapped by a creature with vague supernatural powers. Well, this ain't that sort of game. Elizabeth dies. Ben keeps seeing her in his dreams which torture him, until, one night, a dream seeps into reality. He receives a ticket which takes him to an abandoned amusement park. Maybe he will meet his wife there? Could they somehow be together again? The Last Dream by Specialbit Studio is an unusual, surreal story of loss, grief, but also of bravery and perseverance as long as there's so much as a glimmer of hope. 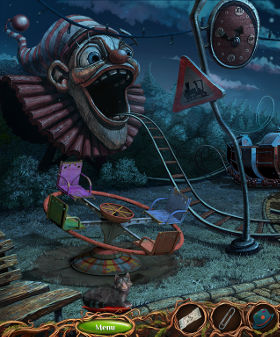 Every time Ben dreams, he receives an object which will lead him into another dream and help him recover another memory of his wife. He also keeps seeing a vision of Elizabeth, convincing him he is on the right track. As he travels from one sequence to another, a strange barrier appears and blocks his way, so he has to improvise a solution for each obstacle. How exactly do you beat a gang of flying pitchforks? Ben has to get pretty creative, but this is an adventure game, so there'll be lots of loose stuff lying around, as well as fragmented hidden-object scenes to rummage through and clever puzzles to solve. He even gets to free a cat who follows him for the rest of the game. As unpopular as animal companions have become recently, this cat is seriously cool and well animated. Actually, the animation in general is top-notch, and it is merged quite seamlessly with live action in the cutscenes. The decision to use actual actors is a curious one, but it works well as a way to differentiate between reality and dreams. Speaking of which, since the gameplay mostly takes place in a dream, there's plenty of room for unpredictable interactions. Every sequence consists of a handful of scenes, so there's never much backtracking. However, this also means that you will have to repeat some interactions (like carrying water in various receptacles) two or three times. This is pretty much the only issue with the gameplay. Most of the time it's intuitive, but not obvious, and interesting without being wacky.

What makes The Last Dream especially good is the fact that it's so unassuming. There are no bells and whistles here, no cluttered scenes or unnecessary busywork. Instead, the scenes are clean, bright and spacious, not to mention gorgeous, but the game never advertises its beauty with dramatic cutscenes or surprising twists. It's more like, "Oh, this old thing? I just threw that together this morning. No biggie." Every dream deals with a different theme, and they coincide with Ben's state of mind, going from sunny and cheery to gloomy and serious. Judging by the changes in tone, you can sort of guess where the game is heading, but the end is still quite satisfactory, one of those endings that make you look back on the finished game and realise just what it was all about. It can certainly prove a favourite with those who have been looking for a narrative-driven hidden object adventure, though it has to be said that it's pretty short. It seems like Specialbit Studio had a clear story to tell, and they deliberately went for quality over quantity. Having both would have been great, of course, but it's still a unique experience, what with its deeply human subject matter and its absolute lack of magic amulets and evil wizards. The demo is definitely worth your time, but be warned: once you dive into Ben's dreams, you won't want to leave.