The Labyrinth of Keys

Calling it The Labyrinth of Keys is a bit of a misnomer. Perhaps it would better be called "The Labyrinth of One Key". After all, you only get one key, and you've got to use it wisely if you want to have any hope of escaping in Matthew Rodriguez's action-puzzle-platform game of the same name. The phrase "you only get one" seems to be popping up a lot in the gaming scene recently. You'd think there was a contest centered around it or something. Although Rodriguez didn't finish The Labyrinth of Keys within Ludum Dare's 72-hour deadline, it's a good thing he stuck around to do so, because the game is quite fantastic. 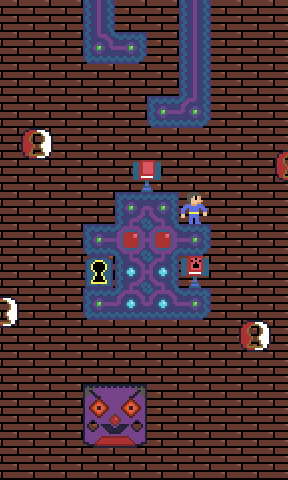 Use the [arrow] keys to move around, and [X] to jump. Although you don't want to unlock any doors prematurely, it's worth carrying around your only key at all times, because only then can you peek into the many books scattered around the wrapping five-by-five grid of rooms, and many (not all, but many) of the books provide critical hints about which one of the dozens of locked doors leads to escape. Touch a flying lock and your key gets stolen from you, forcing you to tap [W] to warp back to the room you started in, where it will be waiting for you again. Certain traps and gimmicks throughout the maze will be reset every time you pick up the key. Once you think you know which door leads to freedom, stand in front of it and unlock it with [K]... but botch your choice and the key will be gone forever, and with it your only chance at getting out. You can also reset the game completely with [R], toggle the music with [M], adjust the volume with [+] and [-], and toggle all the sound with [0].

The "sinister march" mood of the music composed by Khananaphone somehow fits, and the maze design by ZeroTron is top-notch. The little puzzles throughout the Labyrinth are clever, to say nothing of the fact that figuring out which door is correct is one big logic puzzle. The hints and solution are randomized every time, too, which adds a level of replayability to the game. Struggling players may find the list of hints and the labyrinth map useful, although it's quite possible to beat the game without them. Of course, the game lacks polish in a few areas. The control scheme lacks a level of customization, and the graphics can be a little confusing. Ultimately, the game is perfect for those fond of action-puzzle-platformers with logic puzzles blended in... a niche that I personally am proud to be a part of!

This game is fantastic. Early on I thought it was going to be too frustrating, but just a little bit further and things started clicking. I didn't realize until I'd found all the clue books that I'd actually had everything I needed to escape 10 minutes earlier, but it was still pretty satisfying to explore everywhere and solve most of the puzzles.

the game seems great, until you have to trek over half the labrinyth everytime you make one mistake.

@mystify: I agree. I'm not good enough at platformers to enjoy having to do the same tricks over and over every time I make a slip.

I'm not sure which room is the one which has "3 different ways" to enter.

Besides, there's a bug which occurred when I activated the 12 crystals correctly but was swept aside by the block. The crystals failed to act correctly when I revisited and every time it counted as a failure (red).

...is the one just above the upper left corner of the Great Hall. It's easy to reach; just go right, down, and right from the starting room.

I've never encountered the 12-crystal glitch, so I can't comment on it.

I have an update on my image guide. If admin/mods see this message please delete the old post.

It can be found after disabling the security system.

Only 1 of them will be given in each play.

It can be found after solving the "Riddle of Many Buttons"

Regarding death, reset, warp & re-picking up of key:

Only RESET or REPLAYING will reset clues.

It's possible to be trapped and escape become impossible:

use the warp function

It's possible to die from moving bars, blocks, the effect is the same as having the key stolen.

Library of clues to doors (NOT verbatim):

You need to enter the room with falling spike wall and go downwards to break the security system.

HINT to passing the trap:

The bottom moving blocks move in static pattern. Experience will do the work.

HINT to disabling the security system:

The clue's at left side of Great Hall:

SOLUTION to Riddle of many buttons:

(tale of brother may have clue)note the surroundings, the wall pattern is absent at certain position.

Press the fourth (from left to right) button in middle row

Note a hidden button (purple in color, but it's protruded and that gives it away) on the top of left wall (beware of a visible button which is a trap).

Press the left button adjacent to elevator. DO NOT enter.

Wait until it fall midway. Press again, then quickly jump to where the hidden button is at.

Wait until the elevator move to the bottom and press the hidden button. Trace the way to the middle elevator.

A bit more about the brothers:

There are 16 doors that the brothers might choose. Door #1 from the spoiler above is never one of them. Each brother has four possibilities.

So you can figure out from the book in the "many buttons" room and the book after security which of the four brothers is correct, which means you can solve the puzzle while only reading three books total.

About the 12-crystal glitch:

You can only open the security doors once per game. So if you die after opening the third door (while waiting for it to open), you can't ever reach the book that tells you whether the tapestry was taken or not. And if the book in the "many buttons" room talks about Canis the Bard, you should make sure to learn where Jude goes before solving the security maze, so you know whether or not to jump in Door #2 during your only opportunity to do so.

Thank you so much for posting my game!

Henry, awesome work on the walkthrough! I uploaded a new version of the game today that fixed the 12-crystal glitch, and made a few other minor improvements. Thanks for catching that!

Henry - great guide too (didn't peek until after I was done :P). One small point on the map:

omfg that took so long
but in the end it was very much worth it
fun, but im kind of brain dead now! ^^