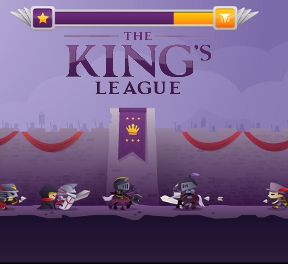 Tiny horse? Check. Tiny bow and arrow? Check. Tiny suit of armor? Check! It looks like you're all set to take on the latest adorable strategic management tiny heroes simulation from Kurechii Studio, The King's League. Lacking any heir and getting tired of his king-type duties, the tiny King (sorry, they're just soooo cute!) has decided that whoever can best him in a tournament will be the next ruler of the realm. You'll need to recruit and train heroes from across the land, capturing territory and completing quests to fund them, if you want to work your way up through the ranks to become the next king. Is this seriously how royalty works? Because I'm pretty sure I can take Kate Middleton.

The gameplay, controlled entirely by clicking on the different icons as the tutorial explains, works thus; each season, you'll participate in a series of matches, trying to work your way up to the champion's place to be able to challenge the King. A timer on the map screen counts down the remaining days to a match, and you can use that time to recruit new soldiers from nearby areas, train your existing warriors, complete quests for fame and cash, or capture territory to earn a monthly income to help pay your troops. You start off with just a single fighter, but you'll be able to unlock more types (and even get a chance to recruit powerful heroes) as you play. Just remember; your soldiers need to be paid and fed each month, so keep an eye on your funds and take quests whenever possible. Battles are automatic, and all you can do is sit back, cross your fingers, and hope you've trained your fighters enough that they squeak out a victory. If you succeed at a ranked battle, you'll move up a place in the rankings, but if you fail you'll lose fame. Don't worry if you lose or if you miss out on a chance to challenge the King entirely; between seasons you can use your downtime to focus on training, harvesting cash, capturing helpless kingdoms, and so forth. 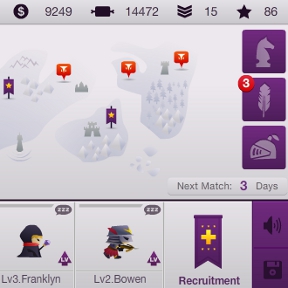 There's no denying that this is a beautiful little game; from its adorable characters to its clean design and soft colour palette, it looks and feels extremely professional. (And adorable.) It's easy to get sucked into since it proceeds so quickly, and the gameplay is easy to get the hang of. The downside is that after a certain point the game starts to feel fairly repetitive, and you'll probably run out of things to do before you win the crown. The King's League can be a lot of fun if what you want is some simple, easy fantasy action wrapped up in one cuuuuute package, but players who prefer more in-depth experiences may be slightly put-off by the lack of ability to really get their fingers dirty in battle. If you're not looking for a lot of challenge, however, The King's League is a fun, easy to like game that can easily eat up the better part of an hour if you let it.

Yes, it picked up fast, but with the help of

those question mark balloons on the map, I got some gossip to recruit special powerful units

I ended but beating the king on the second season with a rating of SSS.
I liked how you manage between training and getting out fighting bandits or conquering places.
The fact that if you lose you can try again with your stuff like Antony's The Lance game.
Thanks, JIG and Dora for an awesome game and the good review.

The balancing seems a bit poo; as far as I can tell, a single magician can kill everything with no effort whatsoever. Maybe there's some mechanism I'm not getting, but it'd be nice if it was explained if so.

..also, there seems to be some kind of glitch: My archers have completely stopped firing arrows, and instead rush headlong into the enemy's melee units and get killed. Good oh.

Do the archers/wizards/healers run out of arrows/spellslots/bandaids or something? Because every one in a while, they seem to stop doing what they're actually good at and rush towards the enermy instead.

Hi Miko, I am the developer of The King's League.
It seem to be minor players are getting the glitch about the archer losing his range attack ability.

I am sorry :( and I am working hard right now to figure out why and try to fix it.

While the priest / cleric will have limit of how many times they can heal, once they are running out of mana, they will run forward to attack.

My priest ran out of mana, rushed forward and sacrificed himself to kill the king, winning the game :)

Does strength effect the damage of archers?

I like the game, but the archers/mages suiciding into the opponent's army is very frustrating.

Same with not knowing how stats really affect the soldiers' strength, e.g. increasing power in archers, or agility.

Hard to tell the difference between mages and archers too. We don't know how much damage they do, so it's impossible to tell who's better.

Also, going through the tutorial every game gets old pretty quickly.

Apparently, the bug that makes ranged units suicide into your opponent only happens when you have 2 of that unit, e.g. 2 archers or 2 mages. 1 archer + 1 mage don't seem to ever bug.

Are the uniques covered by upgrades? As in, does the Crusader get +20% health from the knight bonus?

Yes. Crusader does benefits from the health upgrade.

Can I only ever have 2 units active at once?

I've recruited every special unit except the Cleric. Where is this person at and what do you need to do to get him,

because I followed all the question bubbles to get the others. The cleric bubble never pops up.

I can't seem to get any more special units. I have gotten 3 of them but the last one won't show.

To those missing the cleric, you have to be at season 2 before challenging the king, after beating season 2 just wait a few more days(mine took a week or so) and the '?' bubble appears :D

the special units appear in this order,,

the Cleric appears a few weeks after season 2,,

Hello folks! It was a pleasure for me to score the music for "The King's League"! Thanks again to Yi Wei for this nice opportunity! Just wanted to say to all the King's fellows and players that if you enjoyed the King's League's soundtrack, you can listen or download it here from my website: http://francescodandrea.bandcamp.com/album/kings-league Thanks for reading and good luck for next battle! :) Francesco

Actually there is no order to when they come, I played through one game in this order Warrior, Archer, Priest, Mage, Knight. and in a different game the order was Warrior, Archer, Knight, Mage, Priest though the 5th always comes during the 2nd season.

This is my preferred strategy. not sure what you considered a spoiler, so I just spoiler tagged the whole thing.

In my opinion the best team only uses 2 of the special characters. it's the special knight (Kraig), the Wizard Espino, and two archers (I used Reido and Pasquale, though I'm sure Bowen could do pasquale's job(couldnt afford to recruit him when he appeared). Basically, the knight acts as a shield that moves forward and takes damage for the other 3, aided by it's excellent stamina.(If you cant get the knight, or missed him by mistake, Aoldy (swordsman and first character you get) does a pretty good job although he isnt as fast or as strong as Kraig). the wizard has ridiculously high intelligence (Goes over 100 around level 5)which, if combined with training in agility, makes for a really mean attack. Meanwhile, the archers' attacks are pushing any charging foes (knights/swordsmen) backward so they can't get to the knight very easily. You need to use boxing training as much as you can afford on the archers and knight/swordsman, and you need to train everything except strength (that one's optional, no point in doing so) on the wizard. This team isnt very good against the king (beat him mostly on luck, king was alone against one of the archers and couldnt reach him) or the last territory to conquer (4 knights) but is unstoppable otherwise, blowing right through every quest and going 17-1 in league battles.