Many months after the tournament that decided Kurestal Kingdom's next ruler, the king is the target of an assassination attempt. The new king survives, but Whitney — one of the Kurestal Knights from the tournament — sacrifices his life to protect him. Clearly, this can only mean one thing: time for another tournament. (You have to fill the position somehow.) So goes the plot of The King's League: Odyssey, the sequel to Kurechii's fantasy simulation/strategy game from 2011, The King's League. 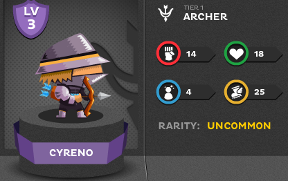 Gameplay will be familiar for anyone who's played the original. The main strength in The King's League: Odyssey is the improvements in the game's graphics and interface. It's much easier to manage your units in the sequel — especially when it comes to finding detailed information about them — and recruitment is a nicer experience when you can close the list of potential recruits and come back to it later. Training fighters no longer costs food or gold, but training points that reset every in-game month: a useful feature for those of us who are trying for a speedrun. The game still gets repetitive after a while of playing, but the addition of more description and worldbuilding to the quests — and the plethora of achievements, new character classes, and upgrades — helps mitigate that. The King's League: Odyssey manages to be quite an improvement over the original despite not adding a lot of new features, and it's a worthwhile way to spend a few hours.

Nice hat, HopefulNebula. Thanks for the spiffy review!

A lesson in simplicity, talent and craft coming together to make a gentle, engaging and beautiful experience that has had me laughing and crying.

I'd say the afforementioned lesson here is how the simplest of engagements in terms of interaction and pacing can create such an emotional connection to the character.

Fantastic and a pleasure to buy (shall make sure I put this on the App store too.

With the "advanced training" unlocked, one of the training options is "hunting." Just for fun, I want to send my whole party out hunting all at the same time. However, even if everyone has full training points, by the time four of them are out hunting, the last one's training points has dropped to too few to go hunting. Is this a bug or something intentional?

Ah! Each character doesn't have his/her own training points - they share them as a group, thus there will never be enough for everyone to go hunting. :(