The King of Shreds and Patches 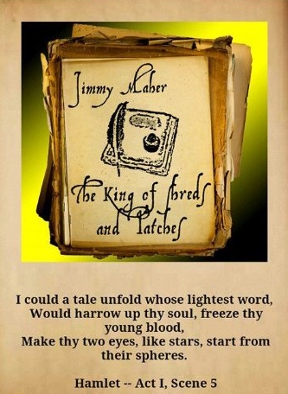 Your life in London is unremarkable, right up until the day a letter from an old friend leads you to the discovery that the world is a far darker and more mysterious place you could ever imagine. Murder, disappearances, strange sigils, and stranger occurrences combine to pull you into a horrific supernatural Lovecraftian mystery in Jimmy Maher's enormous interactive fiction title, The King of Shreds and Patches. Available both as a free download and as an enhanced edition for Kindle Fire or even (my personal choice), Kindle Keyboard (or Kindle Touch), it'll take a keen eye for detail, perseverance, and the ability to pilot a sinking rowboat to get to the bottom of things. But at a whopping 12 to 15 hours of play, don't expect to finish this novel length adventure in a single sitting unless you have buttocks of steel to match your nerves.

If you've never played an interactive fiction title before, dry those sweaty palms since the game boasts an extremely thorough tutorial that walks you through the basics quite nicely. (The general mechanics may change depending on what you're playing the game on.) Standard commands such as "look at", "pick up" and "inventory" persist, as well as shortcuts if you don't feel up to the arduous task of writing each word out. The game takes place in what the author assures us is a historically accurate London circa 1603, and what you need to know is that means big. Really, really big. There are a lot of places you'll need to go, but you won't be without direction. Provided you're in a place our hero, Robert, is familiar with, you can type "map" to get a large map showing all your available destinations, and then "go to placename" to start heading in that direction. Not sure where to go next? Just type in "think" and the game will clue you in on what you should be looking into. (Sadly, the option to "call authorities and ignore all this ghastly occult business I'm vastly underqualified to handle" doesn't seem to be available. Maybe in an expansion?)

Explore, but don't dawdle. The King of Shreds and Patches is as close to a living, breathing world as you can get. Time passes, characters will make requests of you, and, of course, murder is afoot. You can be in very literal danger, and it's important to save frequently and in different slots by typing "save" whenever you get the moment. In addition to conversing with a varied cast of characters with their own hidden agendas, you'll find yourself faced with a huge variety of challenges, some simpler than others, and even some situations that call for action. If you're really stuck, there's an in-game hint system you can access at any time... just type "hint", select the area you're stuck on, and typing "H" will reveal more and more explicit details about that scenario until you're given plain directions. 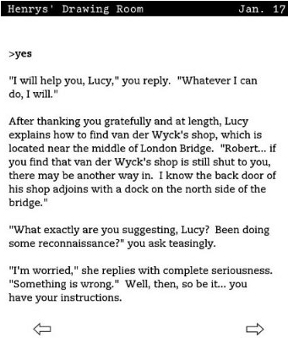 Analysis: Adapted from a scenario written by Justin Tynes for the Call of Cthulhu tabletop RPG, The King of Shreds and patches looks and feels like the massive labour of love it is. It's huge and labyrinthian, packed with memorable characters who look, feel, and act distinct in ways that help engage you in the plot. Interactive fiction has always been better at this than other genres, but the cast here feels far less like actors and NPCs and more like allies and enemies than many other titles ever pull off. The amount of detail and freedom can be a little overwhelming at first. Fish markets! Jugglers! Street urchins! Unspeakable murders and ancient symbols! Ale!

Where the game slips up lies in the way it's structured. Most interactive-fiction fans are used to a format that goes something like, "The room is smelly and dark. There is a trout on the radiator. The exits are south and southwest." Description, items of interest, points of entry or exit. While Shreds and Patches occasionally follows this formula, more often it simply lumps everything together in a descriptive paragraph that allows the game to retain its story feel perhaps more effectively, but can make it more difficult to extract important information from your surroundings in a pinch. You also really do need to save frequently, and in multiple spots, and the complexity and challenge might be off-putting to casual fans or newcomers even with the magnificent tutorial. It really is a game you need to relax and think about, really let yourself sink into the way the story wants you to, in order to absorb all the details.

The parser is one of those things that feels smart until it doesn't. By and large you can go a while before you encounter any hiccups, as long as you don't get too fancy with your language. (Apparently trying to "launch" rather than "push" a boat is putting on airs.) You will probably wish the game was a bit smarter, since having it rather snootily inform you that "use" isn't specific enough when the use for the item in question is extremely obvious can be frustrating. Seriously, what did you think I wanted the knife to do to the rope... coo sweet nothings into its fibers? But by virtue of a rapidly moving story that never leaves you without a lot to do and a variety of clever puzzles, Shreds and Patches will still manage to keep most players hooked. After a while, you'll come to know what the game will accept, and commands will become second nature.

I played it on a Kindle Keyboard and was extremely impressed at what a natural fit it was; through the device's modest capabilities do demand you type slowly, the numerous shortcuts soon feel like second nature. Combined with the generous hint and navigational systems, it really feels like Shreds and Patches is going out of its way to be as accessible as possible, and fans of the genre looking for a huge, meaty beast to sink their fangs into will definitely appreciate it. The culmination of more than two years of work, The King of Shreds and Patches is an imposing and challenging but captivating adventure that's more than worth checking out. Standing head and shoulders above many other titles by sheer bulk alone, it delivers an eerie mystery told with style and flair that players with the time to invest will love to meet head on.

Windows:
Get the full free version

Linux:
Get the full free version

The King of Shreds and Patches (Enhanced)
(Kindle Fire/Android)

The King of Shreds and Patches (Enhanced)
(Kindle Keyboard/Kindle Touch)

NOTE: This game was played and reviewed on a Kindle Keyboard. Game was available in the North American market at the time of publication, but may not be available in other territories. Please see individual app market pages for purchasing info.

:D Awesome game...but...I'M STUCK ON THE ROWBOAT. I'm trying to get back from that one guy's house, but I keep missing the dock, and then the wharf! >,

@ noby, about getting back from that house:

If you examine the shelves in the first room after entering, you will find the key to the front door. No need to use the boat.

I'm stuck at the part where

The cultist rips out Shakespeare's heart and they makes you into a servant for the king in yellow. I tried shooting him, but that... didn't work, and neither did shooting Shakespeare. Any ideas?

I haven't played this for a long time, but I got stuck there too, so I think I'm remembering this right:

If you don't have it, you need to get your grappling hook back from wherever you last used it. Throw that up to the balcony with the cultist on it. Then you should be able to climb up and stop him.

I really enjoyed the game when I played it. So few games give a real sense of investigating, rather than just following instructions. Developers should take note of how the clue system works: there are loads of ways to get the information that opens up new dialogue choices, so there are no bottlenecks and it doesn't feel like everything is artificially gated.

The last game that properly understood this was Bladerunner, and that must be almost 15 years old now!

Oops! That comment was supposed to be for kgy121's problem, not Noby's.

How do I get the two faces next to the fireplace to stay depressed so I can enter the secret door?

If anyone can help I'd be super grateful!!! Been trying for hours to no avail.

Ah here we go, excellent! I just wish I could download it on my android phone. I don't have a tablet and this looks like it would be great for long waits at the DMV and other inconvenient times.

I'm stuck in Croft's house and I have read all my hints. I have 10 out of 11 pages of Croft's diary. I think I'm only missing the one that should be on his corpse. And I need to find the key that's on him, but I've examined him more than I care to and it doesn't help. I cut him down, I have the rope, the dagger, the little candle and my ever-trusty walking stick as well as both manuscripts.

A little help please? Since everyone seems to be farther along than me.

Are you sure that it's the page from the corpse that you are missing? Getting the one from the corpse was pretty straightforward >x corpse or >x pockets and there it is. I had a problem with the one that falls out of Doctor Faustus manuscript. It falls on the floor wherever you choose to read the manuscript and it's not picked up automatically. In my first attempt I read Faustus somewhere in the game, forgot to pick up the page and couldn't find it later. In the end I had to restart the game. The disadvantages of text games...