In Blam! Games' unusually gory hidden-object adventure The Keepers: Lost Progeny, a photograph that shows up on your doorstep one night sends you on a trip to an isolated town. You've spent your whole life in orphanages, like any respectable dramatic protagonist, and you believe the people in the photo may be your only link to your family. Too bad it leads you straight to a town heaving with fiery chasms, elaborate murders, and an ancient secret. Turns out this is the sort of place that's less known for its chili cook-offs and more for the signs of the apocalypse that keep cropping up everywhere, as well as an unfortunate epidemic of dead that's been going around. Will you solve the mystery of your heritage before you end up just another corpse? 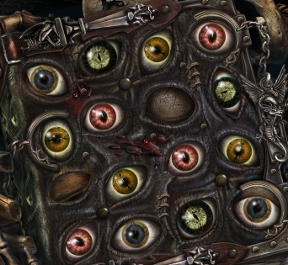 Like many titles these days, Lost Progeny comes with three flavours of difficulty, though the gameplay remains largely the same apart from whether interactive areas are highlighted and how often your hint/skip function recharges. All you need to do to play is explore. You'll discover secrets and useful items as you solve puzzles as you get deeper into the town. It goes without saying that you're in a fair bit of danger; it isn't enough that there are fiery pits and hell hounds about, but there's also a malevolent force at your back that is closer than you realise. If you're ever unsure where to go next, you can click the hint button to be pointed in the right direction.

A few more points of importance before we get to the nitty-gritty. As you've probably sussed out by now, it takes no fewer than three murders and an unholy ritual or two in a hidden object game to get anyone out of bed these days. The Keepers goes well beyond that with the gore being sloshed gleefully around here. It isn't that it's particularly shocking or vile, it's that most hidden object games tend to shy away from anything more violent than a brisk round of fisticuffs, so if you don't like blood and guts, well, caveat emptor. Lost Progeny also requires around 1.5 GB of space to install, so make sure you move all your My Little Pony folders to a USB drive or something before you commit if you're low on space. 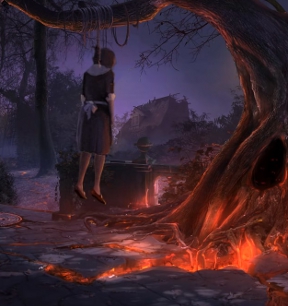 Analysis: For a game about unholy rituals and grisly murder, The Keepers: Lost Progeny sure is purdy. The design artfully uses flame and ember to make areas look otherworldly, and there's a lot of great detail that makes every environment worth a closer look. While the voice acting isn't always top-notch and the facial animations when characters are speaking is often just creepy, you'll still appreciate the frequent cutscenes because they help to make you feel like you're engaged in the story. That immersion even extends to the gameplay somewhat; this might be the first in its genre to use the player's name in a small but clever way that helps to actually make you feel like you're taking part to the story. Of course, if you're like myself and possessed of girly bits, that warm fuzziness will fade somewhat when the game starts throwing masculine identifiers at you shortly after, but it's the thought that counts.

The hidden-object scenes do feel as though they've been phoned in a little, with a fair amount of "find x amount of this thing", and many of them are so dim and dingy you may reach for the hint button just to save your eyes. It doesn't help matters that hit detection can be annoyingly exact when it comes to tiny items, are there are at least two instances where the game will ask you to find, say, a bottle, despite there being multiple bottles in the scene. Fortunately, the rest of the gameplay fares much better despite being typical "track down this missing puzzle piece" fare. The puzzles you'll encounter likely won't surprise you, but their presentation is almost always stellar, serving up beautifully redesigned versions of familiar concepts that fit the setting perfectly and are ghoulishly cool. None of them are particularly challenging, and you've always got the option to skip if you just can't be bothered.

As you might expect from a game that prominently features a de-skinning doberman in the opening sequence (no, it's cool, he seems fine with it), things get more than a little weird throughout the course of the story. Ancient evils, holy orders, conspiracies, an unusually epic ending sequence... everything gets very dramatic and convoluted in a way that calls to mind a Dan Brown novel mixed with a 1980's horror flick, minus a dance montage with some teenagers or two. But since when is a little cheesiness a bad thing? At around four hours it's a solid length, and the Collector's Edition comes with two bonus chapters that add another hour or so to length and help frame up the inevitable sequel. The Keepers: Lost Progeny is strange but entertaining and, undeniably, a bit of a looker to boot.