In The Island: Castaway 2, a prequel/sequel to the original The Island: Castaway by Sahmon Games, you play as the young tribesman Yati as he travels around the island during a time when everything was whole and right, just before any 'strangers' came. Using the same interface as before, Awem offers another great simulation game that weaves a tale of wonder and mysticism! 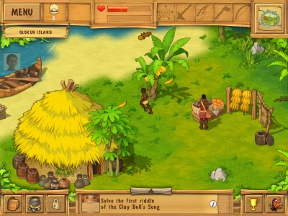 Yati is ready to become a full member of the tribe and must complete the test of manhood to choose his life's trade. Help him run around the island by clicking on the screen to move in a direction. You can alternately click a hotspot on the map, but people only work at a location if they are part of a current task. It's Yati's job to fulfill everyone's requests as they, in return, help him out. After all, 'It takes a tribe to raise a child'... or something like that.

Tasks are offered up one or two (or three) at a time, each one propelling the story forward. Some are as mundane as finding someone who wants to speak to you, while others involve finding the correct ingredients for a recipe, which you must then make and use. While you are never left without something to do, you are also never rushed to do them, allowing you to complete your own desires, whether that's to stock up on multipede stew or collect enough pearls to upgrade your weapon.

As with the previous game, your health slowly decreases while running around, never mind the damage caused by boars or teeth-a-lots. This forces you to multitask, even if your goal is simply to get through the game as quickly as possible. While you can just eat the fruit you pick up as you're running along, taking the time to complete recipes can prove vital as they offer a greater increase to your health when you eat those items. But should you let your health run down to zero, you'll be revived in your bed, no worse for wear (minus a few items from your bag). 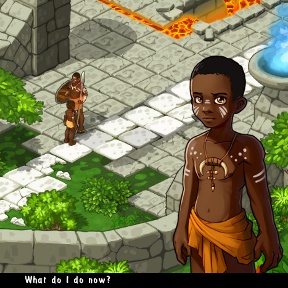 Analysis: The Island: Castaway 2 has the same gameplay as the first in the series, with a few improvements here and there. Without giving too much away, let's just say there are more diverse tasks for you to work with. The Island: Castaway 2 doesn't feature puzzles, per se, but the openness of gameplay and the large variety of characters is just as entertaining.

The folks at Sahmon Games knew what they were doing when they developed this game. They kept the easy-to-use interface, which makes The Island: Castaway 2 simple to pick up and play. Where the biggest change is seen from the first title is in the story and character development. Yati's struggles in discovering the truth about his father are compelling and will keep you vested in advancing the story. The voice acting could use some work, and catching grammatical mistakes always injures confidence in a game, but neither ruins the experience and can be easily ignored.

Castaway 2, with its crisp graphics and smooth animations, is a must-play for those who enjoyed the first Castaway, although no knowledge of it is needed. With 20 achievements to gather as well as over 30 rarities to hunt throughout the island, this game is sure to get you coming back for more, even after your first play through. Yati and his tribe are waiting. And so are hours of fun. So what are you waiting for?

On the razor's edge

Creeping in the grass

As good as gold

Four Parts of a Man

Ashes behind the Back

The one who's gone

YAY! I *loved* the original game (which reminded me of that one game where you control pets I think, that has a similar island-exploration / resource-collecting vibe, and was an awesome game as well) so I'm looking forward to playing this :3

Angelade, I think you're thinking of Wandering Willows, which was definitely a fun game!

I enjoyed this one myself, it felt longer and more complex. I love these sort of games and sort of wish there was a "continue" option to do random gathering quests after the story finishes. Great game anyway. :)

i loved both castaways, cant wait 3 to come out. Any idea as to when it comes out im anxious

[No signs of it yet, but I'd suggest keeping an eye on the Sahmon Games' website for more information! -Kyh]

On the razor's edge

Creeping in the grass

As good as gold

Four Parts of a Man

Ashes behind the Back

The one who's gone

I liked both the original game and this one. I am having trouble finding the ashy wing in Chapter 3. I've searched all over. Any advice. Thanks.

Yati catches it in Leap Quicks Woods after he talks to Neumann Langst.

So, okay...WHERE is the Walkthrough? I see the SAME list of general information shown TWICE, but
NO WALKTHROUGH! What went wrong?

We felt that a step-by-step walkthrough wasn't necessary and that the information listed was what most people wanted to know. If you are having a problem with a particular portion of the game, please post it and we will be happy to help you.

My net won't come out when I try to catch melipedes (crabs) I've been up and down to see if it got stuck but I can't find it any where. Any suggestions?