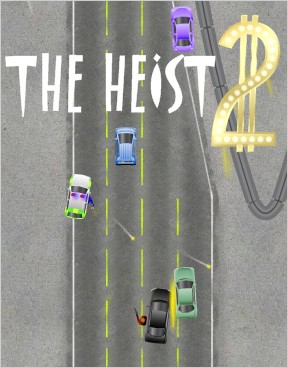 [The following is a reader-submitted review by Donut.]

Hey, there you are! You must be our new driver, right? We were just waiting for you so we could begin. But first, I guess I should explain what's happening here. You see, we are thieves. Though we prefer to call ourselves the Wealth Redistribution Committee. It sounds better, don't you think? Anyway, we had a little "project" going on a while back, which we called The Heist. The plan went flawlessly. We had so much money, we didn't know what to do with it. But apparently the driver did, since he took it all for himself and disappeared. However, Johnny Two Shoes, the mastermind behind the scheme, wouldn't give up so easily. He came up with a new plan, cleverly named The Heist 2! Our goal? A healthy 5 million Credits. No, we're not crazy. Just greedy.

Now that we have that cleared up, let me show you the Hideout. Treat it like your new home. To your right, there's Sam, our automotive expert. Talk to him if your car needs some upgrades, like a stronger engine, better armor, or maybe a landmine dispenser. I'm sure you two will get along just fine. His services aren't free, though, so start saving your cash.

In the middle of the room is Megan, the only woman on the team, and probably the deadliest of us all. She has all kinds of underworld contacts, so she's the one to call if you ever need more people in your crew, or you want some shiny new guns. Last but not least is Lester, our mission manager. He's Johnny Two Shoes' right arm (or foot, heh heh), and has access to all the plans. He decides where you should go next, and whether or not you have the required resources to tackle more difficult projects. I wouldn't mess with him if I were you.

That brings us to you. After you choose a mission, you should stay parked outside the place while your compatriots do the dirty work. Cops are going to try to make our lives harder, so keep an eye out for them, and use this handy walkie-talkie to keep track of the situation and call your men back before things get ugly. Once they get back to the car, just go go GO! The car manual says "Use the [arrow] keys or [WASD] to drive, [space] bar for your equipped special ability, mouse to aim if you own a turret and the [shift] key for a real cool slow-mo effect". Sadly, I can't make heads nor tails out of this driving lingo, but that slow-mo part sure sounds fun.

The amount of money that we "borrow" from our targets somehow increases depending on how well you drive. For example, slamming a cop's car into a wall (or sending it flying with missiles, heh heh) will add some credits to what you already had, and for some reason you also get some extra fuel for the car gadgets. Scientists are currently studying this phenomenon, but they haven't come up with an explanation.

One last thing I should mention is that while the stereo system at the Hideout is always tuned to our favorite song, you can turn it off by pressing [M]. You'll notice that the car radio has been disabled, but that's just for your safety. Because, you know, music can be distracting when you're driving. Especially if you're running from the cops. Yeah.

Well, that is all there is to it! This isn't going to be an easy score, and "earning" 5 million credits is going to take a lot of sweat and blood, but we'll get there in the end! Are you up to it?

Thanks to too many of you to count for sending this in. Cheers!

I was waiting for this one. Thanks.
One problem, though.

After the first time I robbed the convenience store, I only get 200 credits every subsequent time. My specialist leaves with the 200 even before I click on the walkie-talkie.

That then makes the 7,000 credit requirement impossible to reach

Nevermind. all of a sudden, the problem was solved.
Now, I have to find the solution for these controls sticking all the time.

I was playing this a while ago and guess what you can buy at the end for 5 million credits...

A TANK! THAT FIRES REAL TANK SHOTS! WITHOUT USING ANY SPECIAL!

Great game! I was struggling with my specialists dying while trying to get to the car... tip:

Purchase the sniper for all of your specialists and you shouldn't have any problems.

I like when I'm driving on the wrong lane and having oncoming traffic clip my pursuers.

I've tried and tried and it won't let me past the

Thanks for posting this. I enjoyed the first one...glad to see the sequel. It never occurred to me that

Note: During the getaway to your car, you can click on cops to specifically target them. You can also click on your speciallists, though I'm not particularly sure what that does.

I've beat the gold level with 1.675mil and still haven't progressed any further. I'm assuming this means the game is effectively over and I get to replay any previous levels with my henchmen. Would be nice if the developer had included some visual notice that the level progression was over but other than that a very enjoyable game.

Seems that the level cap is 25 for your specialists

Awesome review, nice roleplay, better than some administrators' reviews, but I won't say names. My best streak of cop killing was 19. Very enjoyable. Much improved.

To all the people who beat the Gold Level with the required amount, you need 5 million total credits to actually complete the game.

I did the first mission a few times to level up my first hire. Now I don't qualify for the second mission, and buying new guys doesn't help. There isn't a game reset.

What a waste of time.

The tank is awesome in so many ways.

Strangely fun game, until one level (not all that far into the game), when almost all of my specialists died to police before they got to the car. For some reason, they failed almost all the task-thingies (the ones you do before they leave) pretty much every heist.

r: the second mission requires a muscle specialist -- you must be buying specialists in other areas (maybe without noticing their expertise, I did that at first). Unless there is a bug there would be no way doing the first mission a bunch of times would disqualify you for the second, and actually you probably want to do that.

why do they park their getaway car/tank so far away!!?

Anyway, nice but the ending left me unsatisfied.

I managed a streak of 30 vehicles with the tank, maybe you could do a lot more if you drove as slowly as possible.

The streak is the number in the blue circle, I think 131 by JonC is the cops neutralized not the streak.

Fun game.. Unfortunately, I quit the game during a heist, and it corrupted my save file. :( And there's no way I'm going to play through most of the game again just to get back to where I was.

I just wish that there were a couple new things: a restart button and a way to fire specialists since you're limited to 12 maximum.
Also, hackers and safe crackers have such horrible success rates. Even at maximum level, they're failing consistently.

The gold level was the last one?

Great game, i enjoyed the different parts in the gameplay.
I'll just complain on the ending : there definitely should be an extra mission or bonus level once you reach the last vehicule to have something fun to try it to.

Did anyone realize the take also had the slammer?

@ jasonz777z: That seems to be a bug.
The final vehicle can have a second weapon in addition to its turret. This is done by selecting a different vehicle and selecting a weapon there. Then switch back to the final vehicle. When weapons are fired using the mouse or space bar, the other weapon will also go off. I find that mines are the best supplement, allowing for exceptional carnage.

When you've beaten the game there's limited replay value, but it's fun at least a couple of times to select the first car (which in theory only holds two villains) and watch your six specialists pile into it and drive off shooting!

The tank is boring. The slammer is the way to go! It's like driving a bumper car.

Why do my controls keep sticking? Why?!

Lol guys.. To delete your save file, click "Wipe Save" Button above the mechanic guy. It's icon is a blue disk.

In the beginning of the game when it says 'Drag a weapon to the specialist you want to have it' I click the gun icon on the bottom right and I drag the pistol or the uzi on my specialist, but the weapon just slides back to the icon or to the bottom side of the screen. I don't know if I'm doing it wrong or if there's some kind of bug or a glitch.

try the gun Sawn-off its perfect!