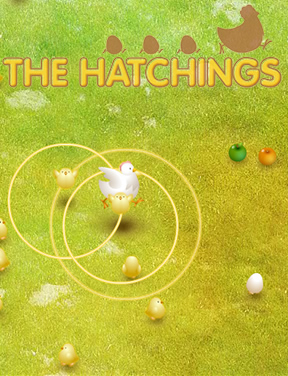 While the title may sound more like an avian horror novel, The Hatchings is actually a bright and shiny Orisinal game for your browser and iOS devices, featuring a mama hen who must be the poultry equivalent of the old woman who lived in the shoe, because she's laying so many eggs she doesn't know what to do. But here's what you should do: guide her away from running into any of her eggs until you've got a critical mass, and then set off a chain reaction for sweet combos!

In the Flash version, the hen will chase after your mouse cursor, laying eggs every few seconds, who will immediately start running around the screen crazily (hey, they can't see through their shells, give them a break). Maneuver the chicken around the eggs, and pick up golden apples if you see them, because they'll either slow everything down and make it easier, or they'll give your chicken a cat mask, and haven't you always wanted to be a chicken in a cat mask? As you run, your score multiplier will also slowly increase at the top of the screen. Once there's a ton of eggs on screen and your multiplier is high, run into one of them to set off a chain reaction of hatchings. Depending on how many eggs you hatch, a number of bonus apples may spawn to give you more time. Try to get the highest score you can before time runs out!

The mobile version is essentially the same except that it's controlled by tilting the device instead (be sure to calibrate it to your preferred angle via the game menu). Tilting ends up feeling a bit more immersive and exciting than the Flash version, but the game does have the strange flaw that switching apps causes your game to end rather than pausing it. Naturally, since this is an Orisinal game, both versions feature his trademark cheerful art. The madcap music with a touch of kazoo particularly suits the game's mood. Whether you play it in your browser or on your iOS device, it's certain to brighten your day. So get cracking!