Ah, the gun. Versatile, loud, deadly. How many games have made use of the firearm for gameplay purposes? Seriously, how many? Our shooter game tag is getting dangerously full. Well, here's another title to add to that venerated list. The Gun Game Redux by Flashchaz and Marsh Games pares the genre down to its basics: you have a gun, targets exist, and it's time to introduce one to the other with as much efficiency as possible. Move your firearm through the air with the mouse, being sure to keep it within the green zone so you don't suffer a penalty, and start popping targets like targets insulted your mom. There are three main competition types... Defense, which has you blasting away targets before they can reach the green, Efficiency, in which you have to drop the target while aiming through a small hole, and Offense, which drops the targets altogether and puts you against an AI-controlled gun that's not shy about fighting back. A wide variety of unlockable guns keeps the game interesting as you blast your way to greatness. 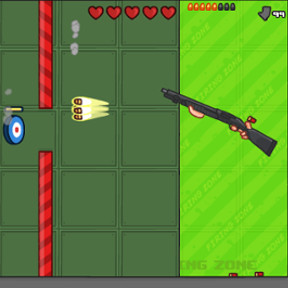 Gun Game Redux offers a somewhat cartoonish presentation, which doesn't lend itself as well to extremely precise shooting. It's not that hard to hit the targets, the fun comes in trying to do it quickly and with few wasted bullets. Repeating old tests with new guns is also fun. You get shotguns, assault rifles, SMGs, and pistols that all have different fire rates and damage ratings. The challenges begin easily enough but quickly become daunting. Targets start flying at you three at a time, quicker and quicker by the moment. It should be said, the Offense challenges start pretty hard already. You only have five measily hearts and the opposing gun can shoot you just as easily as you can shoot it. But hey, there's nothing wrong with some challenge. And there's something primally satisfying about blasting multiple targets into oblivion with a well-placed shotgun spray. So check out The Gun Game Redux and start blowing them all away.

Is it just me, or is the micro uzi the best gun by far?

It took a bit under two hours from thinking the game was dumb and that I'd quit it to unlocking everything except a couple time-based achievements. The "play for three hours" achievement is an overestimate on the part of the developer.

A lot of the things you unlock are just earned by firing the guns a certain number of times. For the autofire guns, you can let the game idle if you hold down the fire button and remove focus from the game. For Windows, I typically remove focus by clicking the window icon on the keyboard.

"How many games have made use of the firearm for gameplay purposes? Seriously, how many? Our shooter game tag is getting dangerously full. "

What do you mean by your tag is "getting dangerously full"? Does this mean that you will delete older games?