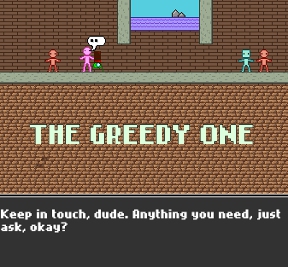 A friend is a friend to the end! Well, until someone needs to borrow money. Or a ride to the airport at 3 AM. Or they show up drunk in a pair of Spongebob Squarepants swim trunks to your birthday party. Or when you give them a handmade sweater for Christmas and they give you a warm can of Mountain Dew and a package of Bic pens. Or... you know what, let's just say sometimes you and your friends don't see eye to eye. But no matter what happens, it's important never to take them for granted. The Greedy One by Undi is a platforming game that was entered into our 9th Casual Gameplay Design Competition, and explores just what friends mean to us.

You play a tiny, skittering green creature in a top-hat and a monocle who is surrounded by friends, but still finds himself dissatisfied with his life and impatient to get on with things by climbing the tower to "The Professional Life". Move with the [arrow] keys, and jump with the up [arrow]. Along your way you'll encounter pink checkpoints, which is where you'll respawn if you land on spikes (or if you press [R]), and pink bouncy bulbs that can give you an extra boost. Your goal is to climb to the top of the tower, but the catch is that you can't do it alone... you have to use your friends to get there. While jumping, you can press [J] to dump a friend for an extra boost. You only have a limited number of friends, and when they're all gone, the game is over. Of course, the higher you go, the more money you earn, and that's all that really matters... right? 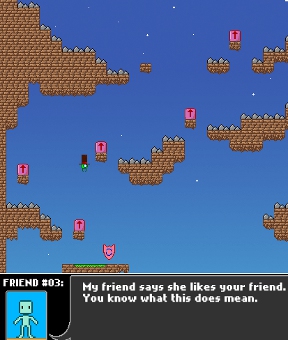 Analysis: Rather than take the sweet, sentimental route to interpret the competition theme of "friends", The Greedy One leans more towards the classic cautionary message, sort of like the Aesop's Fable of flash games. Most players are probably going to get what it's trying to say on their own, and it might have been nice if the game had relied on the experience to convey what it wanted to say rather than flat-out telling you at the game over screen. The presentation here is very simple, but there's something quite appealing about it. The sound of the wind is appropriately lonely, and there's probably some symbolism to be found in how much more cold and dangerous things get the higher you go and the more alone things become. Some platforming skill is going to be required if you want to make it all the way up, especially with some criminally tiny ledges and liberal use of spikes, which will probably make you wish starting a new game didn't force you to trudge all the way back to the tower from the house at the start every single time the game ended.

Unfortunately, there are times when you literally have no other choice but to lose one of your best buds to proceed. Or at least, that's how it appears; even allowing for flawless execution for some ridiculously fiddly jumping. Because the game is trying to deliver a moral, maybe we could have been able to choose to take another path; perhaps an alternate way to the top that was more difficult, but still allowed you to keep your friends, or even an entirely different path that lead to a different life choice. So... is the only way to win... not to play? Well, no, not really, since you'd be missing out on a clever little interpretation of the theme. It's interesting the impact these tiny little sprites can have. There are times when a misstep would require me to climb all the way back to a certain tricky point, and I caught myself thinking how much easier it would be to reach it if I just got rid of a friend or two. The way they turn white and drop off the screen when you use them, falling away like a dead body, is an interesting contrast to how happy they all seem to be in their comments about you before you jettison them. I actually felt a little guilty for it.

It's important to remember that The Greedy One was created within a limited time frame for the competition, and for how long it'll take you to play, it's definitely worth a look. It's easy to sometimes forget about the things our friends have done for us (the big and the small), and it's even easier to get impatient with them when we're frustrated by own our lack of progress. Undi's little platformer explores the concept of friendship and progress in simple but effective fashion, and reminds us just what exactly matters in life.

Of course, if your friends are the type who like to call you up at 2 AM after they've been playing Halo for five hours straight and want a recipe for "energy drinks", all bets are off. INTO THE ABYSS WITH YOU.

Play The Greedy One

Note: this is a arcade game, the idea is how much money you can get. The author promises to remove the story later.

I couldn't get past the horrible controls and sound long enough to really play the game.

I played this game during the comp and must admit that I didn't get very far. Like atomic, I also found it very frustrating and just gave up after a while. I guess I didn't play long enough to get any sort of message. Perhaps it is worth another look...

No... controls are way too finicky. Some of the friend text is amusing, though, but that's not enough to make me bear with this for more than a few minutes, I'm afraid.

I'm a big fan of platform games but I don't understand this one at all. What does the friends do? After jumping on the first friend, I'm totally perplexed. Can't go any farther. I'll keep trying [like on Robot wants JIG...took me ages] but I'm stumped right in the beginning.

Well, the lecture at the end was kinda annoying. Otherwise, okay game.

Ok, got it! Still trying. Managed to get to the 15 friends:0

Maybe it's just my terrible and laggy computer, but did the little green guy move FRUSTRATINGLY slow for everybody? It took forever just to make it out of the house. Also, in the beginning, I think I remember it saying you could use WAD or the arrow keys to move. So when I fell into that little ditch right outside the house, it was very frustrating to find that the up arrow would not work to jump. Why wouldn't it if the left and right arrow keys worked to move back and forth? Also, upon accidentally falling on some spikes and being zapped back to the beginning, I quit. There's no way I have enough patience for this game. Needs a mute button that is more accessible also. Had I not known it was an Undi game, I wouldn't have known to press 0 to mute. EVERY GAME needs an easy to find mute button. Not everyone likes games' catchy little repetitive jingles. I often listen to my own music while playing games and it's annoying to not be able to.

Oh god the controls. This seems like it would be a GREAT game... After the controls are fixed. It would rarely register the j key, and sometimes lag (well, it always lagged, but sometimes it was to the point of no recovery)