Surprise! Just a few weeks after Knytt Underground made its appearance, Nifflas has released a brand new game! The Great Work is a platform adventure deeply inspired by the Knytt series that follows the metroidvania outline of interconnected passageways strewn with items that grant new abilities and access to new areas. Featuring an alchemy-infused story, The Great Work was made to help promote Bautafilm's latest film that follows the story of Christer Böke, a man who took a year off from his job to become a full-time alchemist. 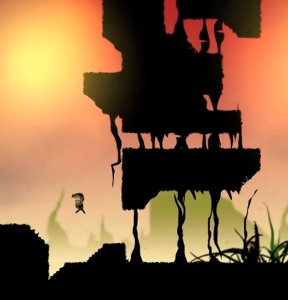 You are the apprentice to Fulcanelli, an alchemist who thinks he has just produced a philosopher's stone. Your job is to transmute the stone to gold. How you do that is anybody's guess. Not wanting to disappoint, you head out into the dusk-drenched world and encounter other alchemists, items both useful and mysterious, transmutation furnaces, and hosts of natural barriers to block your progress. Pretty much a normal day for a platform adventurer.

Use the [arrows] keys to move and [S] to jump. The [A] and [D] keys allow you to open your inventory, swap objects, and equip certain items. Trading is a big part of The Great Work, and just about everyone you meet in this minimalist game wants something, has something to give you, or both! All you have to do to make these trades is move objects from your inventory box to the other person's. Some items can even be equipped, supplying you with new abilities like wall climbs, higher jumps, faster feet, or even overhead ceiling grabs! 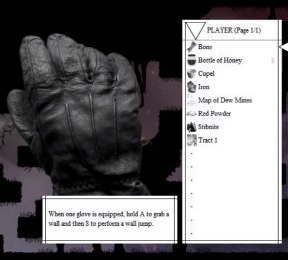 Analysis: The Great Work was a surprise release from Nifflas, but who doesn't love a good surprise? It has the general atmosphere of a Knytt release with a lot of the platforming mechanics to match. The alchemy storyline is handled well, never overwhelming you with details, and the emphasis on item collection/transmutation makes it feel just a bit like an RPG. Best of all, The Great Work is an open source, meaning you can grab a copy of Multimedia Fusion 2 and tinker around with the code to your heart's content.

For a free multiplatform release made by a well-known indie game developer, it's hard to find fault with The Great Work. It's a textbook Nifflas adventure, complete with soothing visuals, beautiful ambient music, and plenty of opportunities to get lost in passageways as you attempt to circle your way back. It's not an overly difficult or complex game, just perfect for an afternoon or two of exploration.

The Great Work walkthrough, with map

where do i find the flask?

cocolaly: to find the flask

you need to get to Egido in the Moon cave. He'll want something heavy in exchange for the flask

this 'something heavy' can be found in the sun cave, but you have to take a shortcut from the area of the moon cave just before Egido's house (see the map).

If you then use the sun cave map to make your way to the sun altar, you'll find a bowling ball to give him in exchange for the flask

I seem to have been everywhere in the sun and moon caves and dew mines EXCEPT the moon altar, the dew altar, and the spot with the champagne - which I can't get to because I need a weight for Eleni, which I assume means finding a more suitable 'heavy object' for Egido to use, and giving the bowling ball to Eleni.
I can't seem to get to Una or Gallasteros in the desert, or Mary and Spintheros in the mountains.
I don't have another piece of iron to make the regulus of G for newton, either.

i need the book to get the alcohol. i have a book. but he doesn't like crappy english translations. how do i get another one? can't figure it out....

you can get the book translated back into french by the guy in the sun cave who examines all the papers and tells you what to do. forgot his name lol

I think crashlanding is past that now, but for those stuck on the Dew Altar

You have to water jump straight up from the chest, in the screen below, to get enough impetus to reach the bottom of the altar - from there just grip and jump around

How do I get past that little creature near the beginning? I've equipped the honey so I can distract it and get it to the end, but I'm not quick enough to run past it. Am I waiting on a speed upgrade of sorts? Or am I just poo?

Um, how do I get the

fumulus of alchemy so I can get the hand claws and flippers?

Wait, I got the tract, but

I can't find the furnace

Back and stuck now, I cannot find for love nor money find the

Sulphate (or what ever it is) the guy needs to give me the book!, I think I have everything up to that point, all the upgrades and nothing left to use in my inventory apart from the Red Powder, Cupel and bottle. All 4 tracts explained

Where is the Mineral G? I can't seem to find it.

I'm having trouble getting to the champagne.

I have equipped the Hand Claws and both Sticky Gloves. But I can't get past the spikes. There doesn't seem to be a way to jump between a ceiling walk and a nonconsecutive wall climb.

Am I the only one who can't get the game to work? Every time I try to start it, it says the application configuration is incorrect. I've uninstalled, reinstalled, redownloaded...can't get it to start.

I figured out my issue before.

I needed the flippers to jump over the spikes. Also that was NOT champagne but Absinthe!

Finished the game, it was quite fun!

I can't play this game on my laptop. When I click on the Great Work game icon on my desktop, a game window appears and disappears immediately - identical to the problem posted at Niffla's support page:

I don't understand how to deal with GPU if that is the issue. My laptop runs on Vista 32 and Mobile Intel 965 Express Chipset Family. Would welcome help.

About time this came out. Watched the trailer so many times in anticipation.

It was just as wonderful as I thought it'd be.

I need the book from gallasteros, but he needs ammonium nitrate. I have dew in a bottle, and the philosopher's stone, but no other materials (just tools for movement) Any clues?

I figured it out! How to get the book! @ yaddab

You need to take the bottle with dew in it and then set it on the sun alter- turning it into ammonium nitrate, then give that to gallasteros to get the book!

Can't run it. Don't have the graphics card.

Another fun game from Nifflas.

It's sometimes hard to tell what the next step is (where the "unlocked" areas are, where the next item is (especially that second piece of iron), or where the next person is.) It's easy to get lost.
Also, the world and story could have been more fleshed out. For example, why are there so many alchemists, and what is the significance of the altars?
The game thus was not as immersive as it could have been-I felt rather aware of the gameplay elements and gimmicks - the trade items around mechanic, the teleport boxes, the weights, the useful items placed exactly where you need them... But I guess it comes with the genre.

On the positive side, I really liked the smooth swimming, the musi and many of the backgrounds.

I have the second piece of iron, the first pair of flippers and now I'm trying to find a weight to give to Eleni, or some mineral G. Can anybody tell me where either of these items are?

I've been trying to find these items for over 2 days now and I'm starting to feel really stupid.

to be able to get to)

I forget where the Mineral G was, but I think

it was in one of the boxes/chests/etc, not a trade.

I have absolutely no idea how to fill the bottle with something and where should I do it... I've seen some people referring to it as 'bottle of dew'.
Any tips, guys?

Nevermind, I got it.

In the end, I just needed to put it on the altar located on the Dew Caves....

An awesome and thrilling game, just like every other Nifflas'!

Second time Nifflas released a game that I can't play on this puter, even though the graphics card is relatively current and able to handle every other game JIG showcases. Very annoying.

The Great Work walkthrough, with map

Has anyone figured out a trade that Zlatica is interested in? I offered several different items along the way but this character seems to be a red herring.