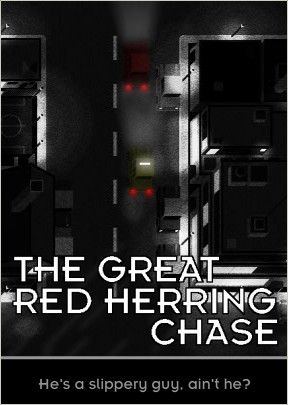 You slam the cab door shut behind you. The sound of rain drumming on the roof fills your ears as you slick your hair back out of your face. The driver shifts around to look at you, the leather seat groaning beneath him. Cigar smoke, glowing silver in the light from the instrument panel, wreaths his head. Breathlessly, you point ahead to the tailights of the red car in front of you, rapidly picking up speed. "Yeah, sure," the cabbie chuckles, tapping out his cigar as he shifts gears and tromps on the gas hard enough to jolt you in your seat, "what're you, some kinda detective?" Your only response is to tell him to drive faster. You won't let them get away. Not this time. This is it. The big hit. This is... The Great Red Herring Chase.

Noir was never so strange as in this quirky little title from Intuition Games and Jiggmin. Played entirely with the keyboard, it puts your speed and accuracy to the test as you type out your instructions to your driver. You say you wanna go left? Easy as peaches. Just check at the bottom of the screen, where all your commands are listed, and type the one on the left side. While they start out simple, the phrases become more and more complex the farther into the game you get. Apparently shaking the seat violently and screeching "GO GO GO" like a demented howler monkey wasn't good enough. Just remember to keep an eye on the command panel, as they shuffle every time you issue a new one.

The objective is to follow the red car in front of you until it gives up the chase. If you let it get out of your sight, an arrow will pop up on the screen indicating roughly where the car is, and a timer will start counting down. If it reaches zero, you'll have to start the chase all over again. But we're sure you won't have that problem. After all, you're whoahmygosh, did you see that U-Turn? That's gotta be illegal! Watch the car's taillights for advance warning of which way it plans to turn. If you don't start typing early, you're likely to go flying right past. (Wait, is this why my Driver's Ed teacher was always grinding his teeth when I drove?)

If typing isn't your thing, visit the options from the main menu and you can adjust the difficulty to "Click", which lets you give commands simply by clicking on each one with the left mouse button. Despite presenting its own set of challenges, especially when riding hot on the tail of your quarry, it's still considerably easier than "Medium" or "Easy" difficulty. Which are, of course, easier than "Hard", which is easier in turn than the job Sisyphus got stuck with. A little. Somewhat. How big was the boulder? Even if you consider yourself a decent typist, the game is probably going to make you feel differently about your skills by the end of the session.

Be warned; while you can repeat a level over and over until you beat it, the game won't save your progress for you. Close the browser, and you'll have to start all over from the beginning. 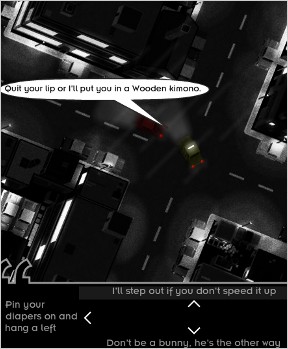 Analysis: While not long or varied, there's a lot to love about TGRHC. It revels in its own silliness, with dialogue so bizarre you know it has to be authentic. This is Dick Tracy, Bugs Bunny, and a typing game all rolled into one. I was hooked from the first gleam of the cabbie's cigar. And when I was determined to apply that lipstick? Fuhgeddaboutit. It's zany fun, and definitely in a class of its own.

Still, even by forcing you to step it up with new phrases as you go along, the game isn't exactly what you'd call deep. Like the tinkly piano soundtrack? You'd better like it a lot, because there's only the one musical track. There's no variation in the city or the cars, and you're still only ever telling the cab to go left, right, faster, or to turn around, no matter how colourfully it's phrased. And while the story is interesting, the ending isn't very satisfying. This is admittedly not an RPG, but I was still longing for some more interactivity, especially against the lovely artistic style of Greg Wohlwend, who I think should be out illustrating some gritty detective comic for me right now. (Preferably written by Jiggmin, but Garth Ennis would do nicely, too.)

But for what it is, The Great Red Herring Chase is a wild success. It's a short but incredibly enjoyable diversion, with tons of style and cheek. Will it help you learn to type bettter? Probably not. But will it broaden your vocabulary of obscure noir slang to mystify your friends and family with? Duck soup, babe.

Wow, I got him the first time after like 7 commands. Yay me!

its not working it wont let me hit commands

I like adding some personality of my own by capitalizing certain syllables.

On "click mouse" difficulty, if you click the "faster" button rapidly enough, you can push yourself on top of the enemy car. I found that amusing.

The "One-Click" option is the way to go if you can't type!

One which which is really cool about clickmode, is that you can still type your commands. Great for adding a victorious textual flourish to the end of a level.

Sometimes the driver responds "I'll make your turn" when you've told him to go faster - I found that detracted from the immersion. :/

Hmm~ I had a bit of trouble figuring out that the period was actually a comma. :P It was a bit too difficult for me to see~

Yep, it works fine now. I guess this whole mini-thread of comments could be safely deleted from here where it clearly doesn't belong :) Thx for the quick fixing job! Another entry in the "Why we love Jay Is Games" column :)

Just an academic question: was I the only one to experience this glitch?

[Edit: No, you weren't. Something happened late last night where we lost the entire 2nd half of artbegotti's review. Browser glitch on the editor side of things, I think. Thanks for bringing it to our attention. :) -Jay]