Behold! Nothing up my sleeves... abracaplatformer... there is your card, my friend!... just, uh... suspended over that pit of sawblades and spikes... hmmm, Blaine makes this look so easy. In Tinsleeves' The Great Magician's Curse: Magicians 2, you play a magician who is not only trapped in a puzzling world of dangers and switches, you're dogged by magical dopplegangers who copy every move you make. Don't worry, they're not dangerous... quite the opposite, in fact, since you can use them to accomplish tasks for you! Use [WASD] or the [arrow] keys to move and jump. But the kicker is that only the main magic maestro can go through the exit and collect the card in each level, and a single hit will destroy any of your magicians. Since they all move at once, you'll need to figure out how to manipulate the copies to open doors for you without endangering your magician... something that becomes even harder since most switches only stay pressed if someone remains holding them down, and deadly barriers may require a sacrifice before they open. 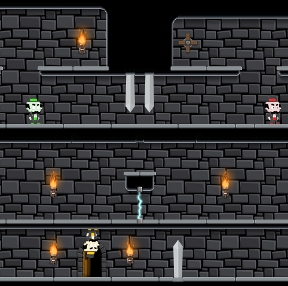 Like a lot of games, Magicians 2 starts off too easy and stays too easy for several stages in the interest of teaching the mechanics (which is good!) but instead of condensing that information into a single stage, it draws it out across several bland levels (which is bad!) which gives the wrong impression of the game. Magicians 2 is actually an improvement over the original, whose controls were so iffy that we opted not to feature it, and though it doesn't exactly provide an original concept, it does offer some challenging levels and a solid blend of puzzling and reflexes once everything comes together. The simple design actually works for it in this case, making small levels that require thought to navigate their carefully placed elements and just enough new obstacles carefully introduced at intervals to scale the difficulty rather than spike it. Magicians 2 still feels like it's missing some sort of real hook or innovative element to really snag the player and keep them riveted, such as a story, characters with, um, character, or even just a soundtrack that doesn't consist of ominous whooshy dungeon sounds. Still, it's a solid puzzle platformer that does an established concept quite well, and hopefully can be fleshed out with even more creativity in the future.

That one level where it's near impossible to get the green guy to stay at the door switch at the top right whilst the red guy tries to go through the door at the bottom? That was where I got over it.

Unrelated: For me right now (on Chrome, and AdBlock is disabled here), the banner/strip that has the Home, Browser, Mobile etc. buttons seems to be broken.

There's black just above and below the row, and nothing is clickable (except you can still type into the search bar).

I don't know about webpage stuff, so maybe it's just a misplaced

My guess is ALL the opposites have to survive for you to escape.
I don't see how that can possibly happen.