The God of Crawling Eyes

In Kasey Ozymy's freeware indie horror game The God of Crawling Eyes, you play Max, a young man who's only ever been able to see in black and white his entire life. The new medication he's recently starting on promises to allow him to see colour, but when the lights go out in class one day he might wish otherwise. Just use the [arrow] keys to move and hit [spacebar] to interact and talk with people. You can only save your game when prompted, unfortunately, and there are multiple ways to die. Luckily, the game will usually provide some pretty clear clues when something is a bad idea, especially if you exercise basic common sense. The biggest exception will likely be an annoying "chase" section towards the end that actually has a logical solution, but expects you to suddenly be able to intuit you can do something with the scenery you hadn't been able to before. 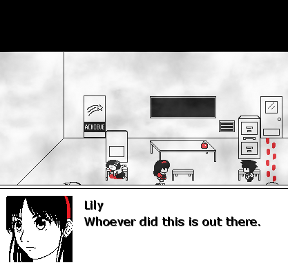 There are four different endings to uncover depending on your choices and actions, and completing the game also unlocks new areas to visit to help encourage replay value. The God of Crawling Eyes is one of those rare horror games that manages to do a lot with very little, and I'm not just talking about its striking visual style and menacing soundtrack. Through the use of great writing the story deftly paints in ominous foreshadowing, and manages to craft believable, likable characters in a short amount of time. It does horror without a lot of jump scares, which is rare these days.

Unfortunately, in a lot of ways the story seems like it needed a lot more setup in certain areas, since most endings are far too abrupt and unsatisfying in their resolution. It's intended to be short, sure, and it definitely has a great Twilight Zone feel to it, but the big reveal is sort of underwhelming. Max's colour blindness feels like it's only there for the visual design, when it felt like there was greater opportunity to weave it into the story, which in general had a lot more potential. But though it winds up being a little predictable, The God of Crawling Eyes is still a cleverly executed and well designed short horror story that makes for a perfect creepy break.

Well, it's pretty easy to get stuck, something which shouldn't be possible for such a small game with so little to do at the beginning. Especially when you are actually told to do something that will lead you to be killed.

I'm not going into the principal's office with that monster in there, yet that's exactly what I'm told to do. The only thing I can do is to make chlorine gas, but even though I have closed all the vents, I'm still told it will just go out through the pipe.

And while I imagine this is how I kill the monster, it's not something that is immediately logical or obvious, after all who even says that it's toxic for that monster.

And if I need to do something else, well I just don't see what. I can't open the well, despite the note, and I don't see what the red extension cord could possibly be for.

So I'm not impressed with this game, making it possible to be so stuck so early on.

Is there another place I can download this from? When I click download it says it's either forbidden or that the url doesn't exist. Then after I refresh the page and click download again it says "Limit for this game download reached.Please try again in 14 minutes." I've deleted my history and emptied my cache but it still won't work.

Same problem as Dandy. Which stinks because I love me a well-executed horror rpg.

The same thing happened to me. I just waited till the time passed to download it again.

To be able to get through where you are, ThemePark,

you need the two chemicals, and the flag. Go through the school closing all the vents you can get to, which means one will be left open in the principal's office. Examine the vent on the top of the school and you'll be told the flag will just blow away. Visit the school bathroom and soak the flag in the sink so it will cling, then go back to the roof and put the wet flag on the vent before adding the chemicals to the air system. This will flood the principal's office, and the office alone, with the deadly chemicals, allowing you to go in. Inside, you need to quickly search the cabinet for what you're looking for and leave before the gas gets you.

Ah, it never occured to me

that the flag could be taken.

I'm at what must be the chase Dora mentions, but I don't see the logical solution.

I've found that the ladies restroom is now open, but whether I go in there or anywhere else, I'm killed. Was I not supposed to have taken the eye stone? It doesn't make sense that I can't even use it in any of the holes in the hidden doors.

Hi ThemePark, you need to either

go to the classroom where Lily is and quickly block the door with the nearby filing cabinet, or go to the library and do the same where Chase is.

So what options do I need to choose

to get Lily to not save me and thus get her B ending? I've tried choosing the options that shouldn't make her love me, but I still ended up being saved by her.

Soaking the flag was a really non-apparent solution to my problem. Why can't I just tie it down with the electrical wire? Why should it occur to me when clicking on the sinks earlier did nothing?

And then when I DO soak it, I get sucked into the mirror, a nightmare version of me walks out of the bathroom and I get a game over. WTF?

This is really kind of frustrating. I'm a sucker for a good horror game and this one had all kinds of atmosphere with the creepy stark contrast in the graphics.
Also, is there a way to save manually? Because having to start all over from a certain point kind of sucks.

malone.audrey: I thought the EXACT same thing! And the game is ruined thanks to there being too many of those situations, where the solutions don't make sense or can't readily be figured out. As for your problem:

I'm not sure, but I THINK that occurs either because you haven't tried using the dry flag on the vent, or haven't talked to Chase yet. When he's told you to go to the Principal's office, AND you have tried using the dry flag on the vent, THEN you should be able to soak the flag with your normal self appearing in the mirror. But when you see the dark version of yourself, then stay away from the mirror, as you have no undoubtedly learned.

The game seems confusing, and the chase scene can be really frustrating but to escape it you have to


So far only seen 2 endings, I don't really care for playing it over just for different results.