From Takahiro Miyazawa, otherwise known as SKT-Products, comes The Frog World. Immersing and beautifully textured, The Frog World will be immediately familiar to anyone who has played a 3D platform game in the last decade. Gathering stars in order to access new levels? Time trials that force you to go from point A to point B as quickly as possible? Frustrating clipping problems and difficult to estimate jumps? It's all there in your browser, thanks to Macromedia's Shockwave 3D. 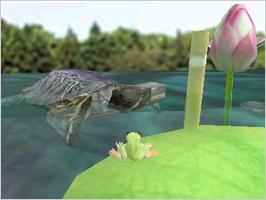 The first thing you'll want to do is set the text to English on the title screen. The controls, which are visible below the game window as well as in an extensive help menu, are not very demanding: Use [left], [right] and [up] arrow keys to move, and hold the [down] key to zoom out the camera. The frog will do a short hop if you tap the [space] bar; hold it for more distance. [Z] sets the camera to a first person view. Although you can't move while holding Z it is especially helpful for targeting insects, which you can grab and eat by pressing [X]. Finally, press [S] while inside a portal to exit a level.

The game begins with four levels of training. You'll soon find yourself in a hub area with portals to all five Frog Worlds. You can save your progress on a leaf in the center of the room; a good thing, as there are 72 stars to collect and over a dozen individual levels to explore. You won't be exploring them all right away, however; predictably, you'll need to collect a prerequisite number of stars before entering all but the first world. Sometimes you'll find stars floating in plain sight, but just as often you'll have to eat all the available bugs, or successfully complete a time attack. Time attacks begin when you find a clock icon and end when you reach a checkpoint (or run out of time trying).

Analysis: The Frog World's style is refreshingly realistic; the scenery is more Pikmin than Mario. Wisely, Miyazawa didn't create yet another wisecracking anthropomorphic mascot to star in his game; wandering around the well-constructed environments as an actual frog provides an excellent sense of scale and atmosphere. Unfortunately, The Frog World suffers from the same problems as most 3D platform games. Clipping errors and camera problems are far too common and, in a game heavily based on jumping, it's not easy to determine how close you can get to an edge without falling off, or when you're going to be able to pass through an object versus bumping your head on it. All things considered, The Frog World is an impressive, well constructed effort, and fun for an hour or two.

Hey, uh, as first reviewer, I'm going to have to say, uh, that I had an excellent time with this nice 3D game! This was an awesome experience! Except for the fact that most of it was Japanese. Thanks for the submit, Jay! Still going pretty well here! Just one request: A little more games per day, maybe 2 or 3, if it isn't too much to ask. Thanks! love ya, Jay!

crud my school blocks most of your games but not your site..could you link your games to your site if you could? anyway great site its the best

p.s. can you find some more point and click/escape the room games i like them best

Mirroring the games on this site is probably not possible, for a number of reasons. You could try using a proxy server to trick your school, though.

No-one else seems to be commenting on this game, but anyway... I loved it, a really well-made game in my opinion. I found it quite relaxing to play, and just the right level of difficulty.

As mentioned, it can be hard to judge jump distances, but I didn't find this too frustrating.

The background music is excellent, and the final level is pretty cool - took me a while to work out how to beat it though!

I was really impressed by The Frog World too, James. Maybe we're seeing the effects of the smaller installation rate of Shockwave vs Flash reflected in the comment count!

This game is awsome. But whats the point of the black frog? I saw no skill ups after becoming that

Well I also discovered the blue frog and it did me no good. Its worth getting every star though

After collecting the stars go back to the level select type area look around until you see a leaf on top is a red glow. enter it. And check out the familier stuffed animal!

How do you go through the portal on the 1st level??

Cooool...I have cleared the game man The end boss is soooooooooo easy.

How do you beat the snake?

i got to stage 2-c and then i got stuck inside a pop can!

Dude, I do that Z up X thing and its not working! What the heck is wrong with it?

to aim your tongue at higher/lower angles:

press Z and control with up/down to set the angle, then X to eat those worms(although i was expecting flies)

the instruction on the bottom of the screen seems misleading -_-