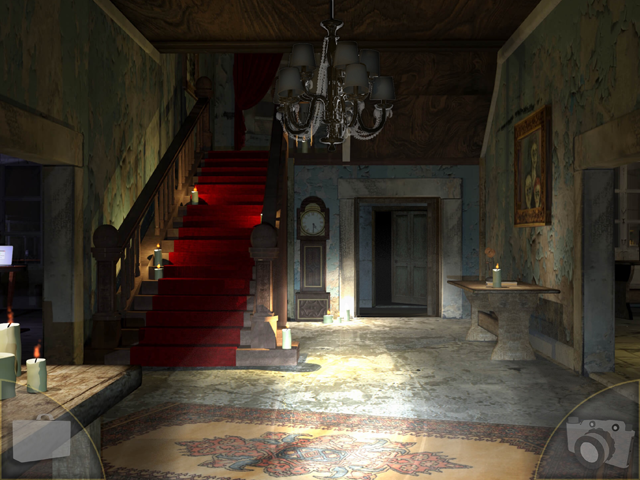 Quick! If someone walks up to you and yells: Glitchhhhh Gamessssss what's the first thing that springs to mind, apart from thinking that that's a mighty odd way to start a conversation? If you're like many of us point-and-clickers, perhaps it's Forever Lost, that modern classic of a dark adventure trilogy.

But perhaps the second thing is, "But wait, odd person! After Forever Lost and its mini-spinoff Cabin Escape, they made A Short Tale, with its bright colors and almost alarmingly (if deceptively) cheerful tone. They were all great, but suddenly I can't stop thinking of puppies, rainbows, and talking toys, and I blame YOU."

Well, fine, Debbie Downer. Without further ado, I give you The Forgotten Room, which takes us right back to the vivid but gloomy first-person atmosphere of the FL series. This time you play as "paranormal investigator" John Murr, who's been called in to investigate the disappearance of 10-year-old Evelyn Bright, last seen playing a game of hide-and-seek with her beloved father.

While it's a bit shorter than the Forever Lost games, everything you like about Glitch remains intact there: the gorgeously rendered graphics, the clever puzzles, the occasional burst of cheeky humor, even the helpful camera interface that relieves you of the need to take lots of pesky notes.

What happened to Evelyn Bright, and on the assumption that it probably doesn't involve either puppies or rainbows, do you dare take the risk that it might happen to you as well? If so, dim the lights, put on some headphones, and go in search of The Forgotten Room.

This is great! That said, it would be even better of the names of the games were also links (as they usually are).

Fair enough, Paul! You can get to the JIG reviews for each of the earlier games by entering their names into the search box, but on the assumption that this is acceptable protocol, I've also changed the first reference to each game to a link to the game page on Glitch's sites.

Pay to play game, I hope a category/tag be made for such games little easy for amateur gamer like meself when searching game to play. Thanks :)