The Flower Shop from Winter Wolves is a visual novel/relationship simulation centering around a new college student named Steve. Rather than telling a specific story, The Flower Shop is about figuring out a direction in life, and follows Steve and the people he meets throughout the course of his summer in the small town of Fairbrook. Will he wind up in love? Will he repair his relationship with his father? Or will he decide that small town life is for him? That, as it happens, is up to you. 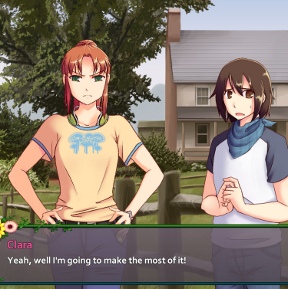 The Flower Shop plays like a visual novel; Steve narrates the story, and you're presented with choices that affect the plot and his relationships with the various characters. After arriving at his uncle's farm, Steve is also given the ability to plan his week out ahead of time; you can only choose one activity per day, although Steve always spends the morning working on the farm regardless of what you choose. When planning your schedule, you'll also be given a look at Steve's current stats; keep an eye on his health, since if it drops too low, he'll be too tired to go out. Balance work and play with relaxing at least once a week. Right-clicking on the screen or pressing [ESC] allows you to save the game at any time, and the plethora of save slots means you can make the most of your time and choices.

Spending time with people not only advances the story and improves your relationship with them, but has the added bonus of increasing your stats. Each person has an influence on one; running with Clara, for example, increases your determination, while talking with Jill, who's connected with the scene in Los Angeles, increases your coolness. Why is this important? Well, if you want Steve to end up with one of his ladyfriends or just to get a good ending, you need to have one or more of your stats above 80. A good strategy is to spread your time out with everyone so that Steve winds up a well rounded character rather than focusing all your attention on one person. This has the benefit of making sure your stats increase, and letting you see more plot elements so that the town feels more alive. Despite apparently consisting of only five people, a library, and a flower shop. And I thought I came from the middle of nowhere.

Analysis: If you're going to make a visual novel, it's important to have two things; an artist who knows which end of the pen to hold for the "visual" part, and a writer capable of stringing more than two words together in a competent fashion to handle the "novel" bits. In terms of simple aesthetic value, The Flower Shop actually looks really professional; while the anime style won't be to everyone's liking, characters are well designed with vivid colours, smooth lines, and distinct looks. The story is never what you would call high drama, but both the dialogue and the narrative are well written and enjoyable. Chances are you'll find someone you like hanging out with, but even if you don't, nobody says a happy ending has to involve romance. Steve makes for a good protagonist in this regard; he's a little immature, but basically a good guy, and his interactions with other characters feel natural. Women are friendly, but don't throw themselves at him or spend most of their time mooning after him; a pleasant change from most other titles in the genre. I would have preferred to be able to speak with people more to really flesh out their personalities and backgrounds, but on the whole, the cast is pretty solid. 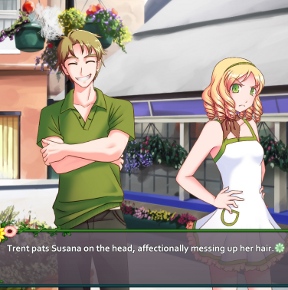 The gardening aspect is a nice touch, but feels like it needed a bit more fleshing out to elevate it above bare minigame status. Every action takes an hour, and all you do is plant, pull weeds, water, or clean up pests; everything feels completely random, and it isn't worth it to plant different vegetables. You have such minimal interaction with your crop that tending them takes less than ten seconds, much like a Facebook application, and there's no reason to harvest them except to make cash that you can only spend on more seeds. The game winds up feeling like it would have been much better played as a pure visual novel, leaving the gardening similar to the sequences you have when interacting with people; small descriptive scenes with an occurrence and actions to take regarding it.

That said, there's a nice sense of freedom to the game that is enjoyable. If you don't find tending your crops all that exciting you can ignore them completely and spend your time chatting with the women and their friends around town. While not life-changing or particularly original, the story is heartfelt and often humorous, which offsets the more serious tones nicely. What can be frustrating is that advancing the various plot points depends on being in the right place at the right time, and there isn't really any indication of where your various stats need to be at to trigger an event.

The game offers nine endings to discover, not all of which end in muchas-smooches with someone, and an option to skip dialogue you've seen before on replays as well as the sheer number of save slots means it's a snap to go back and try different paths. Which you'll need to do, since, despite taking place over a single summer which can make the game short, there are a lot of branching paths that only appear depending on certain interactions, and your choices during them. Despite a rather lackluster approach to the gardening aspect of the game, The Flower Shop is a sweet, charming, and funny title that makes a welcome addition to the genre with a lot of quality on offer.

This was a very sweet game, I had a little trouble finding all the possible endings, but I had fun interacting with the story. All in all, this is worth 3/5 approving nods, 1/2 sighs and 1/1 Bravos
Well done!

I love this game. One of my favs. I love to play it before bed. It's funny I used to just read books. Now I can feel a little more closer to them without having to be over stimulated like with console games and such. It really brought me in and when he kissed Susana I felt like I was really apart of it. So exciting... This game and visual novels in general. But I must say that so far this one is top 3.....(Now if only it were eroge)