The Flame in the Flood

Created by The Molasses Flood, indie action adventure The Flame in the Flood is a rogue-lite post-apocalyptic tale without zombies, mutants, or nuclear weapons. An enormous flood has washed away most of the land, and with raging rivers, hostile wildlife, and dwindling supplies a real issue, survivors are few and far between. One such survivor is Scout, whose campfire is visited one evening by a dog bringing with it a backpack and a radio, whose signal seems to lead far downriver. With only a makeshift raft and the things they can find along the way to keep them going, can Scout and this intrepid pooch survive a wild and untamed landscape long enough to find out where the signal is coming from? With both a story-based and endless modes, The Flame in the Flood is a challenging, gorgeous survival adventure with a few rough edges but a singular charm and style. 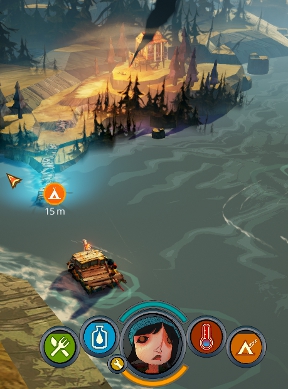 The game is split between guiding your raft down the treacherous river, and exploring the islands of unsubmerged land you come across. The game is primarily played with the mouse, clicking and holding to navigate your character around, and right-clicking to interact. While exploring, the [spacebar] is used to shoo away crows and temporarily frighten animals, though since combat isn't an option, you'll need to flee from wildlife like angry boars and starving wolves and use cunning or traps to deal with them. What with it being the end of the world and all, there are no stores, so you need to get by on what you can scavenge. Crafting plays a huge part of survival, so everything you can find, from cattails and saplings to scrap metal and wild berries, can be used to keep you going. You'll unlock more crafting recipes as you go, but don't neglect your basic needs! Scout needs food, water, and sleep, and things like the temperature and illness can bring the journey to a bloody end. Once you're dead, you're dead, though in adventure mode, you'll unlock checkpoints rather than having to start all over from the beginning.

When you're not exploring, you're rafting. Click and hold to guide your raft, and tap the [spacebar] to paddle harder at the cost of some stamina. Icons that appear on the map represent various places you can dock to explore, from abandoned churches and campsites to stretches of untamed wilderness, each with their own particular benefits and possible items to scavenge. Of course, getting there isn't easy. The river's current can be hard to handle, especially areas where it flows particularly fast and dangerous, and you'll have to be quick to steer around wreckage and rocks. The raft's general "health" is represented by the yellow bar around Scout's portrait, and taking damage by running into things depletes this. You can repair the raft at certain locations if you have the supplies, or even improve on it to make it harder or give you perks like a place to sleep. Keep an eye out as you row downriver... areas with a faint blue glow around the edges can be looted as you pass by if you're quick for a random item or two. 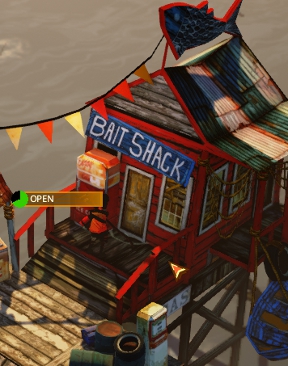 The Flame in the Flood might be one of the loveliest apocalyptic games you've ever seen. It has an almost storybook quality to its visuals and a richness to its colours that sucks you in, while the lonely but optimistic guitar and harmonica tracks that see you through are superb. Environments seem at once threatening and otherworldly in their beauty, with waterlogged trees popping out of the water like the skeletons of dragons, and the bits and pieces of the way the world works today you uncover as you go along paint a picture of a world filled with both danger and adventure. The emphasis on survival rather than combat means thinking and planning, making the most of every scrap you come across in every area, and despite its occasionally folksy feel, The Flame in the Flood does not go easy on you. 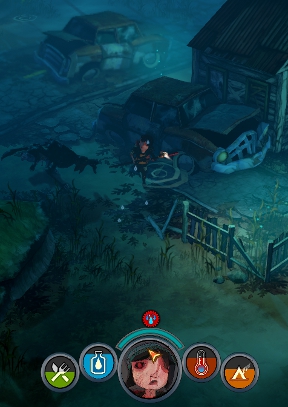 The problem is that the random generation often seems punishing instead of challenging even on the standard difficulty, with survival often coming down to whether the game sees fit to grace you with the items you need to get by. I've had runs end simply because I never came across anything to cure an infection or snakebite, areas filled with hostile wildlife (literally two or three wolves and boars at a time) I had no chance of dealing with so early on, and the end result is a game where chance feels like it plays just a little too much into survival at times. Going through one playthrough where you're suffering through subsisting on a bulb of wild garlic here and there, and then another that immediately sets you flush with tons of food and other supplies, is a little frustrating, especially since the rafting can feel a little repetitive. Admittedly, a lot of the game is knowing when to run, and when take risks. Successes feel all the more sweet as a result, as does the passage of each hard-won day. The more you play, the more you'll learn how useful some items can be, and how to best make use of your limited inventory and spoilage.

Despite some rough edges, The Flame in the Flood is accessible without being simplistic, and challenging without being brutal. It's a survival game that feels like it's about the journey in the way few other games in the genre are, which is impressive given the limited amount of dialogue and narration there is, and you feel both small and yet mighty as you claw your way through it. As of this writing, the game is fairly buggy, with a lot of freezes and sound glitches, though these are most likely going to be patched out sooner rather than later. If you've been hankering for a survival game with realism, heart, and a real sense of adventure, then The Flame in the Flood should be on your short list, no bones about it.