No more battle cries. No more allies or foes. No more levels or epic loot. No dungeon crawls, or quest giving, or npcs repeating everything they say over and over again. The Empty Kingdom is coming to an end. Once the clock strikes midnight all the servers will be shut down. All that is left is a king, wandering around his empty kingdom in hopes of finding something; perhaps a new life to begin. This experimental visual novel by Daniel Merlin Goodbrey is a peaceful tale even though the King could be facing his untimely deletion. Though midnight approaches in the story, there's no timer, and you can take your time as you walk across the panels. If there ever was a game that was soothing and relaxing, this is it. 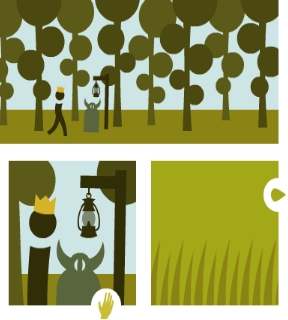 The Empty Kingdom is quite different from most games. You can pick up or use items only when a little hand pops up in one of the panels. In the end, you don't have to do much thinking as you just walk around and find where the option is given. That being said, you can figure out what to do and where to go instead of just blindly moseying, but that isn't really the point of The Empty Kingdom. D.M. Goodbrey is no stranger to experimental as the web comic he writes (which contains brief adult language) is also a twist on the genre, and his powers of storytelling come out clear in The Empty Kingdom as it is more of an experience than a game. But what a beautiful experience it is! There's just something oddly fascinating how it all works together, and moving through one panel changes the what happens in others. The use of minimal sound effects, silent storytelling, and simple graphics makes The Empty Kingdom a beautiful piece of art.

Really zen, I loved the sounds and the art style. Sweet little story, simple to play. Very short, but I enjoyed it!

Wow, this is a beautiful little game. I found myself re-visiting areas just to sit there and listen to the peaceful sounds of nature.

That had me missing old memorized parts of Azeroth. The atmosphere is perfect. If you've ever erased an old saved first-person game that you spent waaay too long wandering around in, this might seem familiar.

Really pleasant. Always excited when someone does something new with the medium like this.

"...the web comic he writes (which contains brief adult language)..."

As opposed to long-winded adult language.

I wanted to point out that it is difficult to find this author's other games on this site, because A Duck is tagged "emerl" and "Icarus needs" is tagged "dgoodbrey" while this game is tagged "dmgoodbrey." Maybe all 3 tags should be used on all the games.

Thanks for the heads up andr01d. We'll fix that asap. =D

Aww. And they lived silently ever after . . .