Hans has big dreams... he's ready to be grown-up now and take off on wild adventures, but with his father gone to war and his mother struggling to make ends meet, that seems farther away than ever. When his tenth birthday arrives, Hans is fed up and ashamed of being poor, and decides to strike off on his own to find riches and glory. While the night is dark and frightening, Hans still thinks he's struck it lucky when he stumbles across the Castle Tenebre, and learns of a mysterious count who's looking to find a worthy heir to bestow his fortune upon. All Hans has to do is prove himself and survive the trial... Baroque Decay's The Count Lucanor is a striking indie horror action adventure that's both beautiful and eerie in equal measure. As of this writing, Mac and Linux builds are on the way! 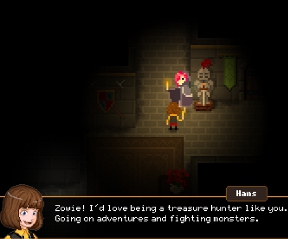 Move with [WASD] or the [arrow] keys, and interact with things you're close enough to with [E]. If you want to use an item, open your inventory with [I] to choose and equip it. It's important to really explore your surroundings to find out what can be pushed or interacted with, but make sure you keep an eye out for gold coins! Later in the game, they'll be used to save your game, in addition to purchasing items from the merchant, and they come in finite amounts. As you explore the castle, stealth and puzzles will both come into play. You'll need light to find your way in the dark, but it can make it easier for things to find you, so you'll want to take note of places you can hide in or use to sneak around. Curtains can be hid behind, for instance, and Hans can crawl beneath some furniture. Make sure to leave some of the candles you find in strategic places as you explore so you can spot any dangers hidden in the gloom when you come back. You can always pick up a candle and put it somewhere else if you change your mind... they never go out. If Hans takes damage, his health can be restored with food, but when his health runs out, it's game over, and you'll need to reload your last save. The ultimate goal of the game is to search the castle for letters to spell out the name of your strange blue host, if you can figure it out, and with five different endings depending on your choices, you're in for one wild fairytale. 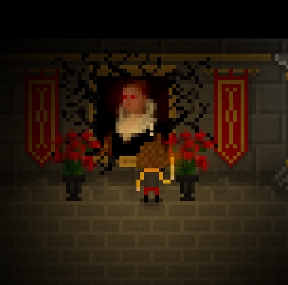 The Count Lucanor has a very fable-like feel to it right off the bat, from the set up of the story to the way certain elements of it progress. The game claims to take inspiration from titles like Zelda and Silent Hill, though while its tendency towards shock value means the influences of the latter are more blunt than subtle. There are times when the game is profoundly unsettling, but Hans' reaction to these events tends to be simplistic enough to downplay them, while a tendency of the game to be too enthusiastic in pointing out the meaning behind its imagery often leaves it telling rather than showing. "Relax," you want to say, stroking its anxious brow, "I get it. Just let me figure it out on my own." "THIS RIVER REPRESENTS THE BLOOD OF ALL WHO DIED AT WAR," the game bleats back nervously. Admittedly, Hans' childlike reactions to things fits within the fairytale design of the plot and setting, and other games like Gretel and Hansel have also reveled in putting ankle-biters in twisted and violent situations. The animated pixel-art cutscenes are absolutely gorgeous, with beautiful direction and detail, though even the gameplay pixel graphics manage to be both expressive and perfectly creepy when they need to be, thanks in no small part to some great use of audio. The Count Lucanor has some absolutely peerless pixel art design, and it's all the more memorable for its startling imagery. 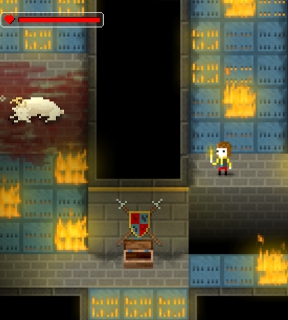 Taken as, well, a game, The Count Lucanor is largely solid all around, though not without its nits to pick. Hans's default and only speed is slow, the limited save system may add to the challenge but still feels archaic, especially since it means trying to plan out what you need to use to save versus what coins you need to buy items to proceed, and some of the progression relies on you simply backtracking to see if something has changed in the areas you've already accessed. This last part may frustrate players who like a game to leave just enough hint crumbs to lead them in the right direction, but it does often lead to some surreal discoveries and a sense that the castle is more organic instead of being a fixed series of triggers. The puzzle and classic adventure elements are stronger than the stealth or action sequences, though they're all balanced out against one another fairly well. Even with Hans's slow speed, avoiding enemies usually isn't that hard, but it's sort of dodgy... you can pop underneath a table two steps from them and most of the time they'll just sort of mill about in confusion before wandering off, presumably thwarted by the power of mahogany. Other times, they still seem to be able to reach you unless you're positioned just right. If the save system were less limiting, getting the big Capcom YOU DIED red letter send off wouldn't rankle so much, but getting face-tentacled to death when you should be safe or tagged multiple times by a fire trap tile is still extremely annoying. Hans' slow walking speed might be by design, but when you need to replay a chunk of the game, or just cover a lot of ground, it's still frustrating. 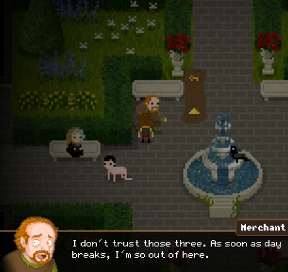 Even when things get weird (and they will), the game can swing between silly and scary at the drop of the hat, keeping you constantly off-balance. It actually underscores the themes in the game nicely... Hans is still a child, with a child's sense of adventure, and things that appear whimsical and exciting at first glance begin to slowly get darker and more twisted, jumpscares included. Getting the game's multiple endings may mean occasionally going against the most obvious path, with a lot of it coming down towards what you do in the latter bit of the game. As befits the fairytale structure of the story, some endings are more satisfying than others, with the potential for things to go very, very badly for Hans, though the story still manages to play out regardless in a clever way. Some of the ending dialogue still seems a little strange when it tries to account for certain variables, such as what Hans manages to acquire in his trials, but you'll still find reason enough to replay the last portion to see them all. Most players will find the game takes them several hours or more, and The Count Lucanor manages to be engaging the whole time, exuding a dark sense of whimsy that makes it feel captivating and unique. Despite some rough edges, The Count Lucanor is a striking, fun, morbid fable of an adventure from a talented developer we can't wait to see more from in the future.

Man... that third picture. Spikes, fire, sheep blood. It's got everything.