The Clumsys is a hidden object game that departs from the traditional formula just enough to feel like a new experience. It's Tim's tenth birthday and his friends are over to celebrate. Grandpa Albert is working on a time machine in the barn, but when he turns his back the children discover it and go hurdling through time. Each of the 20 kids has been deposited in a different era, and it's your job to find them, fix all the problems they've caused, and bring them back! 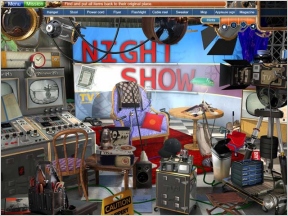 Because children love to make a mess, your main task will be to find and eliminate all inappropriate objects in each area you visit. You'll start with hidden object scenes and move on to find and replace games and more, all centered around the item hunting mechanic. Instead of finding lists of objects, however, The Clumsys gives you a much more nebulous task: find the items that don't fit. It's a bit disorienting at first, but most objects are obvious stand-outs (such as a basketball in Napoleon's tent) and you won't have much trouble spotting them.

Once you gather items in a location you'll move on to find and replace. This section gives you a list of hidden items you'll need to find, and once found you'll use a small silhouette thumbnail clue to put it back in the correct place. Afterwards you'll enter the fix mode where you must locate and use several items to undo some sort of damage the child has done in the scene, such as putting the wheels back on the Trojan horse or fixing the Hindenburg's engine.

Finally, after all traces of the child's shenanigans have been erased, it's time to look for the little troublemaker. Using one of the professor's gadgets that you assemble as you play, look around the screen for signs of the child, and solve a quick puzzle (usually involving finding a few items amidst the clutter) to bring them back home.

All of this item finding takes place from a central location where you can choose which area to visit. You complete each mode as you see fit, so if you aren't in the mood to do find and replace, you can always do seek and find in another area. 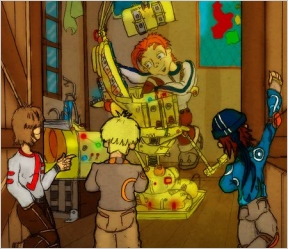 Analysis: Probably the best feature about The Clumsys is it's long and very satisfying length. There are 20 children to find, each in his or her own time period and location, and each requiring several stages of puzzle solving/item finding before they can be found. This adds up many, many hours of gameplay, and you won't likely get bored during that time.

One hiccup the game experiences is in the hidden object scenes where your only direction is to find the items that don't fit. A few stages are extraordinarily difficult (the 50s television studio comes to mind), and some hold items that, according to the game, don't fit, yet there's no logical reason why. Fortunately the unlimited hint system (which constantly recharges, allowing four levels of hint precision) alleviates this difficulty.

Familiar but with enough variety to draw you in. The Clumsys, with its quirky sense of humor and scattered bits of historical info, is an excellent example of keeping a casual genre fresh without destroying its roots.

You'd think this game was made by Sierra. As soon as I looked at the game at Casual Gameplay and saw the professor, I thought of the Dr. Brain games. Must be his cousin.

...the children discover it and go hurdling through time...

I think the children went hurtling (to rush violently; move with great speed), not hurdling (to leap over a hurdle or other barrier), through time.

In Back To The Future IV they use the hurdling method.

My only question is, how did all of these kids manage to get locked in crates, chimneys, and other ridiculous places?

Yaay! Just as I was craving for another hidden object game, this one comes along. Bliss!

I liked that twist of how they make you look for objects that "don't belong" instead of giving descriptions. Finding the kids with the machines was mostly smooth but once in a while it could be very tough. This is a decent sized game and it was worth buying.

If the makers of the game "tell me" to look for items, that do not fit in the timeperiode of the scene, than they should make sure, that the items you have to click are do not fit.
But a cat in the Lindenbergh-scene? A cake in the Elvis-scene?????
The idea is good, I like that game, but too much mistakes like this in it.

Unfortunately it's not just about finding things that do not belong to that particular time. It is just as much about finding toys that the kids have left behind, whether having been invented before or after the time period in question.

Unfortunately that causes a lot of confusion.

Well, toys and other stuff that comes from the birthday party and house.

does anyone know how to make the punch card work in last level? i can hold the card but it wont punch on computers it needs too. i found a place that shows where to punch it and where to put it after but it just wont punch

# Once you find the punch card, you will see some lights blink on the computers in the room.
# Use the empty punch card on the stations in the correct order to input the right code.
# In the screenshot the correct order is marked.
# After your card is full, click it onto the main computer.

I'm stuck on the titanic 1912 where i have to find 2 missing parts and a screwdriver and attach it back to the pedestal. Where is the pedestal to attach it to? can anyone help?

Needing some help in Einstein's study incorrect objects.
I'm down to one 'wrong' object which is over on the right hand side of the screen.

It seems to be in the chalkboard somewhere. I already removed a sketch from one part of the chalkboard earlier - I think it was a car. The hints show sparkles and circles around the area and I've tried clicking on the various symbols and formulae with no luck. Any ideas?

Thanks for any suggestions!
I have 4 more levels to go and can't advance till this one clue is done for this level.