The Clockwork Man 2:
The Hidden World

Miranda and her clockwork companion Sprocket are back in Total Eclipse's hidden object adventure game, The Clockwork Man 2: The Hidden World! Featuring elegant hand-drawn visuals, twice the content of the original game, and the series' standard scrolling and zoomable levels, it's exactly what you would expect from a follow-up and delivers a solid, well-balanced hidden object experience from beginning to end. 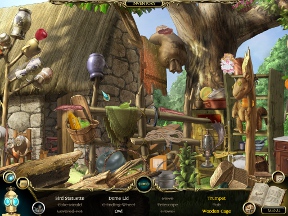 Miranda Calomy's parents went missing over eight years ago, and she's on a quest to find them. Exploring a cave in Ireland, their last known location, she stumbles into a plot much bigger than herself, discovering secrets her father had kept hidden for years. Strange cylinders, a distrustful professor, cloaked figures in the background, and an entire world hidden from view. Good thing she's the crafty daughter of an inventor.

Gameplay switches between hidden object scenes and puzzle-oriented adventure areas. Many parts of each scene can be interacted with, as indicated by the changing cursor. Often you'll need an item from nearby to proceed. To pull a lever, for example, you might have to remove a piece of metal blocking the way. What better way to do that than with a crowbar? To gain certain key items, you'll participate in a number of short hidden object scenes. Sometimes you'll need to move to another location to find the things you need, but since everything is readily accessible from the map, you'll never get lost or have to backtrack very much.

The Clockwork Man 2 takes an extra step to make hidden object scenes interesting. Instead of flat, still pictures to stare at, many of these environments can be manipulated with the mouse, keyboard, or on-screen controls. Zoomable stages are introduced right away, allowing you to roll the scroll wheel to zoom into the background and take a gander at what's down the way. Scrollable stages can be dragged left and right, moving several parallax background layers in the process, and uncovering some things you might not have noticed before. 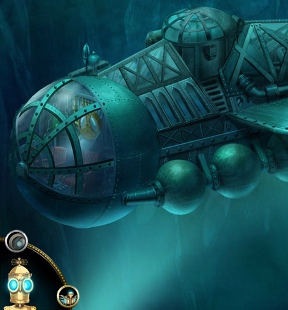 Sprocket is more than a collection of gears and metal, as he functions as Miranda's companion as well as a hint buddy. You'll find several gadgets on Sprocket's icon at the bottom of the screen, each designed to help you find items in different ways. You can get a direct hint that shows you where one random item is, for example, or take a peek at several items at once, receive a picture of the item in question, or even read a text-based hint. Plenty of ways to make sure you don't get stuck in the game, and each ability recharges after a short time.

Analysis: Another gorgeous game from Total Eclipse. The Clockwork Man 2 is a stunning piece to look at, and the artwork will capture you in every scene. Even the character portraits are nicely done, with subtle animations that help convey emotion or just add an extra flourish to the picture. You'll find a lot of living things in the environments as well, like birds perched on reeds or squirrels nibbling on acorns. That, along with the interactive scrolling, help pull you in to the game's world an extra step.

Compared to its predecessor, The Clockwork Man 2 improves on just about everything, especially overall length. The original game was short and had a less-than-satisfying ending. The sequel, on the other hand, is twice the length and won't leave you scratching the head when the credits roll. The visuals are just as stunning as ever, though unfortunately the steampunk has been dialed back a bit, leaving more countryside scenes and indoor environments to sift through.

The Clockwork Man 2 never tells you exactly what to do next, but it's always easy to figure out what needs to be done. For this reason, the challenge is somewhat lacking, though not so much that you'll never get stuck. The story also falls somewhat short, especially when compared to the first game. You won't be quite as interested in what happens next, as it's a bit predictable, even if well-told.

Better than the original, and a solid hidden object/adventure game in its own right, The Clockwork Man 2: The Hidden World is one of those dependable games that deserves a space on your game shelf. You know, if you had a game shelf and the game came in a case and such...

Chapter 6: The Fall of Darkness

Chapter 6: The Fall of Darkness

I cannot get the mac dl to work. Opening the zip file opens a window of garbage.

[The download link for the Mac is somewhat hidden on this page. Once there click on More Systems and Languages. The Mac demo download link pops up then. -Jay]

Thank you! I found it!

thanks for helping me out

During Fall of Darkness phase, I only have 3 glass tiles, not 5. Help!

Clockworkman 2...I am having lots of problems trying to enter the tree house. Can anyone help me. I've found all the items, but it continues to tell me to take the cup of water with me but I can't seem to use it anywhere. Can anyone help me to find out what I need to do?

Guest -
Check the walkthrough above the comments to see if you have missed a task.

When I have to put together the postcard there is one piece missing (part of the dove). i can't seem to find it anywhere (it's not hidden behind the rest) and I can't continue the game unless I finish the card...

According to the screenshot in the walkthrough above the comments, all of the pieces should be in one pile on the floor. If not, you may need to contact tech support wherever you bought the game.