The Children of Brinn 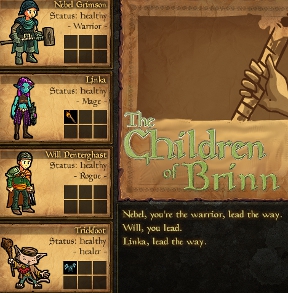 Adventure meets text-based fantasy in the latest game from Hyptosis, The Children of Brinn. The titular "Children" are a guild, a group of adventures from warriors to healers and more you can hire for your problems. In this case, you find yourself leading a small band of them to a village whose vineyard has been beset by supernatural ills. Giant locusts the size of horses, for example, which sort of makes one think maybe Grandma Ben and Fone Bone might be better equipped to deal with this, but hey, how hard can a bunch of bugs be to deal with? The game plays out partly like a choose-your-own-adventure title, tasking you with selecting the choice you like when presented and then dealing with the consequences. Your party and each member's general health is displayed to the left of the screen, along with whatever each character is carrying. Depending on how well your decisions go over and whether you select the right people to carry them out, you'll see the party's status change for better or worse.

The Children of Brinn is well written and handled, but also extremely short and fairly easy to win with flying colours if you pay even half attention to your party's abilities and the events around you. Though it is possible to fail catastrophically, the game will offer you the ability to hop back to the last big choice so there's not much lost even if your entire party takes a dirt nap. There is, however, at least one significant change and a lot of extra scenes that can only occur if you manage to get a specific party member knocked off, but you'll still be done before your coffee cools. In a way, The Children of Brinn almost feels more experimental than anything else, especially given how abrupt the ending is and how little you get to know your party after their initial introduction. With Hyptosis' flair for design and promising world-building at work in a way fans will appreciate it seems like more and larger adventures with the guild would be a great idea. In the meantime, however, The Children of Brinn is a solid little diversion brimming with potential, cat-person-things, faces melting, and ale. Huzzah!

Play The Children of Brinn

Look at the bright side, Dora: at least there aren't any Rat Creatures.

This game shows some pretty good promise. As it is now, basically just a small preview. Needs to offer more choices as well, but so far the balance of the story does allow for a reasonable immersion into the game.

When I look at the high scores... what the heck!? How do you get that high of a score with such a short series of events?

What disturbs me is that at first glance, making the irresponsible decisions gives you more points. But I played a few more times just to get accurate point scores so that I could prove to you here just how bad it was. And playing the exact same way multiple times in a row gave me more and more points. I find this rather strange.
Your points are not based solely on the choices you make. But what are the points based on.
@samuelasherk: This is one hypothesis to your question. Perhaps those people played again and again for days and got more and more points.

Hmm, I made about 3 choices then suddenly had won! Oh well!