The Cave of Ātman

RPGs get a bad rap sometimes, what with their tendency to demand you stop the plot and spend at least three hours grinding to make your party stronger before you can so much as tickle the next boss. Chris and Daniel Johnson have done their best to not only streamline this, but also make it appealing, by turning powering up your party into a puzzle in their turn-based retro-styled game The Cave of Ātman. Your party of heroes has descended into the titular cave, where every floor is filled with monsters... but you can't just mindlessly start hacking away. As the tutorial will show you, each level is a puzzle. Click a hero to select them, then again anywhere that highlights blue to move them there. Once they've moved, red squares will show your attack range, or you can click them again to cancel your move. The catch is that your attacking hero has to be of equal or greater level (displayed with a number on the sprite) of the enemy they're trying to wallop. When you destroy an enemy, its aura will drop and slide a space (vanishing if it hits an obstacle or lands in a hole!), and any character that picks it up by moving over it goes up a level. Oh, and did I mention each character can only move and attack once per stage? As a result, every move you make and monster you slay needs to be carefully plotted out. 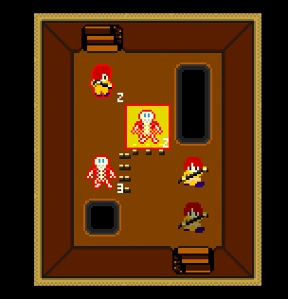 With pitch-perfect old school music by Hayden Davenport and some clean yet cute as a button pixel graphics, The Cave of Ātman is easy on the eyes and the ears, though some tracks are short enough that their loop can render them annoying. Though the game starts easy, as different heroes with attack restrictions are introduced and more obstacles crop up, things get more challenging without ever feeling like they become overcomplex in the process. Chances are you'll find that it still takes a long time to build up to anything that'll stymie you for longer than a moment or two, largely because the difficulty curve seems to go up and down like a wave for most of the game. The biggest challenge might actually be that the tutorial simply doesn't go over anything other than the bare basics, so you're left to figure out how each hero works on their own, or, for example, that two auras can be combined into a more powerful one. Some players will actually enjoy having to puzzle out the mechanics, however, and will find The Cave of Ātman a clever, if simple, little game that knows how to make the most out of very little. The ability to undo a single move rather than being forced to restart an entire level would have been nice, but for fans of strategic turn-based puzzling, The Cave of Ātman is well worth firing up.

Play The Cave of Ātman

Nevermind, I worked it out.

You don't have to move to attack, you can click the same space you are on first.

Love this! It's a chess-like with fireballs.

I see that because of the difficulty of typing funny characters, you have resorted to copy-pasting, resulting in "The Cave of The Cave of Ātman" :)

That was a bit short, only 28 levels.

On the other hand, though, the ending is quite... surprising.

Ha! Finally beat every level. I won't spoil the ending, only say that it's not really the sort of ending I like.

On another note, I'd like to have seen a greater variety of enemies. Perhaps there could be enemy types, for example, that attack and kill lower-leveled heroes foolish enough to stop next to them. Or enemies that move in a predetermined pattern, one step every turn.

Both of the long-hitters have to hit 2 each, and the right knight will kill the 11-skeleton

The knight shall kill the 6-skeleton, and the lower archer the 4-skeleton.

Begin with moving the right long-hitter one step down, and killing the skeleton to the left of it. The diagonal guy shall take the aura, and go into the left corner to kill the 2-skeleton from NW.

The upper archer shall go once up, and once left and kill the skeleton under him, and then the second long-hitter shall go and hit the two skeletons standing together at once from the left side.

Let the archer take the 2-aura, and then the 1-aura close to him, and hit the 4-skeleton from the right side. The knight can then go and take down the 6-skeleton with the 6-aura.

Was genuinely expecting a Batman joke.

The long-hitter should take out the upper-right enemy first, then you should notice a chain reaction you can set off going down the middle.

Not sure what the other poster was on about.

Move the bottom left character (purple) up three spaces. Waste the skeleton at the TOP LEFT (right above it).

Use the blue soldier at the top left of the two columns to was the skeleton below him. Then again with the one below him to make the green guy a power of 3.

Do this on the right hand column as well.

Take the left hand green guy to right below the purple guy and kill the skeleton to the right. This will push a power three soul.

Using the blue soldier on the right hand margin, grab the three soul and kill the skeleton at the bottom center.

Take the green guy from the right hand side and move him directly above where you just moved that soldier to. Now you can knock off the skeleton in the middle of the field.

Using the soldier on the left margin to collect the soul and kill the skeleton at the top center.

Finally, take the yellow guy from the bottom right, move him diagonally-below to the right of that last skeleton and bam.

I did a Google search on the word "Ātman". Apparently it means "soul" or "self". I don't know if that sheds any light on the ending, or anything else...

Played through 25 levels in about 30 minutes. Have been stuck on level 26 for almost an hour. About to give up. Help?

top long mage down and hit both 1 skeletons

right long mage down and hit the 3 skeletons horizontally

all in one spoiler

top long mage down and hit both 1 skeletons

right long mage down and hit the 3 skeletons horizontally

Y'know, to be blunt -- no one would be terribly surprised by the ending if the review had at all mentioned what atman means. It's one thing if reviewers just miss a cultural quirk but this is a word in the title. Atman as a concept is the basis of a whole group of religions practiced by a substantial chunk of the world's population. Nearly all of which are focused on separating/distinguishing the atman from the physical body.

We have wiki now. We as readers should not be the ones having to use it. This already happened with Samsara Room, where several commenters were completely disconcerted by the ending. I mean, I get that oversights happen, but this gap in essential information is starting to border on culturally insensitive. Take five minutes to look it up and link it back to the game, please, since this is clearly part of what the developer intended. If you cannot explain it yourself, then find someone on this tiny Internet who can before it gets to us.

If anything, if this game had been at all less than brilliant, not setting us up for the ending might have dropped it a mushroom or two. Dropped it out of the year-end awards? Made players pass on it when they might have enjoyed it? If you were a one-person operation, okay, but... This does not serve the developer, the players, or JiG as a ratings-based site.

Could I get a hint on level 23? Where should I start?

Thanks for the level 27 hint. I hadn't realized

the archer could shoot through walls

I've always wondered how the skeletons, zombies, monsters, etc managed to wind up in dungeons and caves... perhaps now we know!

the right archer needs to hit the top skeleton.