The Cave is both the title of DoubleFine's latest action adventure, and the name of your gracious host and narrator. Not a nickname, mind... it's very literal. The Cave is a sentient wonder of nature, and within lies treasure, adventure, and peril. Seven strangers have assembled to plumb its depths and uncover its secrets. But whether they survive is up to you as you create your own team of spelunkers to work together, solve puzzles, and maybe even get to the bottom of the Cave entirely... and themselves. What? Too dramatic? Well along the way, you'll also have to rescue a mining cart full of vittles, tantalize a death-breathing beast with an enormous hot dog, track down ill-gotten treasures to sell in a gift shop, and bodily hurl yourself off more cliffs than you can shake a stick at. 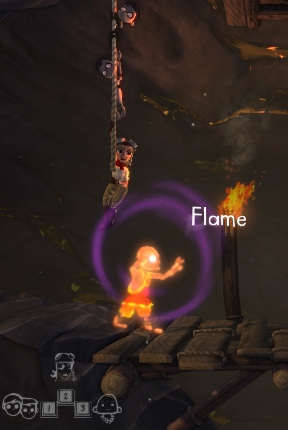 The game controls with a combination of keyboard and mouse that can be configured to your liking under the options ranging from simple [WASD] to almost entirely mouse-driven. At the start of the game, you'll be presented with all seven potential characters to assemble your spelunking squad, so spend some time experimenting with each one, or just pick the three you like the best and take them each into the Cave to begin your adventure. Think carefully, since once you go past a certain point you won't be able to change your party, and everyone has their own unique ability to help out. The Twins, for instance, can leave a ghostly double of themselves behind to hold switches and such, while the Adventurer can use her grappling hook to snag onto certain bits of scenery and swing past obstacles. Once inside, your party will have to work together to proceed, using each other's special talent or simply muscle mass to manipulate the environment together and solve puzzles. Though any combination of characters will allow you to complete the game, who you pick will have an impact on what you get to see and where you get to go.

So what's in the Cave? Well... a lot. But don't worry. Whether you drown, get crushed, get devoured, are impaled, electrocuted, or otherwise dead, there's no dying in the Cave, and you'll be teleported back to a safer spot close to where you kicked the bucket. Since most of the puzzles in the game will require a lot of experimentation, this is a good thing. Sometimes you'll need to use a bit of simple platforming skill. Sometimes you'll have to trigger different mechanisms all at the same time. Sometimes you'll need to set a trap for a giant killer crystal beast. There's a lot more inside the Cave than rocks and cobwebs. As you play, keep an eye out for glowing drawings representing your party members... when you click on them while the appropriate character is active, you'll get a bit of insight into their history. Of course, for the whole story, you'll have to go deeper... 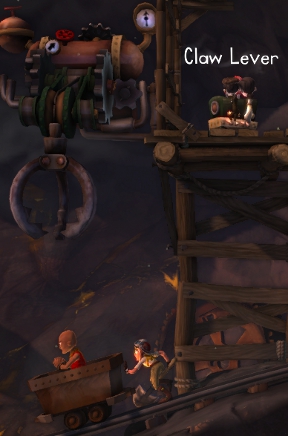 Analysis: The Cave is one of those games that's more than just a pretty face, but is still quite pretty indeed. The visuals are, of course, cartoonish, but it's hard to care when the areas you'll explore are so beautiful. Lighting plays a big role in it, with the rich colours and imaginative design makes this a game you'll love to explore every nook and cranny in. Perhaps even more impressive is the fluid, expressive animation, from the way characters gesture and move their faces naturally as they talk, to the way the Twins quickly help each other work in tandem to do everything from climbing to swimming. It might be one of the best animated computer games around... it's certainly one of the most personality-packed, brought to life with superb voice acting, and in a primarily puzzle-driven adventure, that's extremely important.

The controls are... decent. Ish. With no real way to entirely disable one set of controls in favour of the others, you can find yourself accidentally activating abilities or swapping heroes. Combined with how awkward the platforming can sometimes feel, especially given how slowly your characters climb, this means traveling to and from places is sometimes more frustrating and tedious than it should be. It helps, then, that the actual gameplay itself is really, really fun. While I wish that more of the puzzles you came across used your party's unique abilities in more interesting ways, the bizarre nature of the obstacles you have to overcome is offset by how tightly designed each area is. Though each Cave area is fun, however, the game really shines once you begin to explore each of the locations dedicated to your party members. There, the game executes some great storytelling, allows you to interact with more memorable characters, and offers up some truly beautiful level and environmental design that provides a welcome break from the rest of the Cave.

Ultimately, how much you're going to enjoy the Cave comes down to how much you like clever environmental puzzles and DoubleFine's signature brand of humour, and both are in remarkably fine form here. It's an exercise in marrying absurd jokes with some surprisingly well-handled storytelling, and once you finish you'll want to go back through again with an entirely new party to see what areas you missed. It really is a fantastic example of puzzle-based adventuring, and has more style and charm in a single level than most games have in their entire package. The Cave is one of those games that's an easy recommendation for players who like to think, laugh, and be constantly surprised, and will keep you busy and mesmerized for a long time.

Fixing One Well, Breaking Another

Stealing from a Dragon

Returning for Your Prize

The Room of Animals

Getting Rid of the Competition

Escaping the Island Without The 4th Wheel

Chapter 5 - Return to The Cave Souvenirs

Returning to the Gift Shop & Making a Difficult Choice

I watched the trailer. Considering that cave's sense of humor, I think its last name must be Johnson.

This looks really cute, especially since it's a Double Fine game.

The only thing that bugs me is that, as a multi-platform release, now I have to try and decide which platform to pick from. WiiU seems nice, for the superior D-Pad, but I'm not sure if the tablet-screen offers bonus features that improve or detract from the game. I like that Steam offers achievements, since it's more fun to complete tasks when you know the computer's keeping score, but does the WiiU version do this in any capacity?

Do any of the versions suffer from bugs the other versions do not?

Similar questions as SirNiko. IF the PC controls are kinda nasty (which it sounds like) how are the 360 or Wii-U controls? Anyone know of any good comparisons between releases?

The PC controls are REALLY bad. I can't do the platforming stuff- horribly optimized. That said, my boyfriend is playing the PC version with a USB controller and says it plays fantastically. So there's that. I have a PS2 USB controller, better blow the dust off and see how it fares on my own machine.

Fixing One Well, Breaking Another

Stealing from a Dragon

Returning for Your Prize

The Room of Animals

Ron Gilbert is involved. Why is this not mentioned in the review!! RON GILBERT!!

An impulse buyer as always I bought it as soon as I'd seen the trailer and have spend the last couple of hours playing through it (with Time Traveller, Knight and Scientist, and it is a very very funny game.

The writing is extremely enjoyable as is the narrative layout - a very entertaining angle on characterisations and the VO has made me laugh quite a few times.

Controls are, admittedly, a tiny bit fiddly BUT not unbearable and to be honest I've only had a few complaints, nothing game breaking (at one point my knight got stuck in a wall but a restart of the game cleared that.

Currently a tiny bit stuck on the 'Time Travel' level (museum/prehistoria anyone?)

But it's a very very enjoyable game throughout.

Getting Rid of the Competition

Escaping the Island Without The 4th Wheel

Chapter 5 - Return to The Cave Souvenirs

Returning to the Gift Shop & Making a Difficult Choice

As others have said, the game is great! The controls are bad (PC) but not game breaking, what matters are the puzzles(which are independent of the controls here) and the humor. The puzzles are usually nice, but I can't say that they glow with ingenuity. The humor is fantastic.

Funny joke that I need to share with someone:

You find a dead clown eventually, and if you press its nose it makes a typical horn sound. If you keep pressing repeatedly the caption changes from "Clown" to "Aroused Clown". Oh god, that killed me...

@Jim Le Fevre: Here's where I got stuck for a while

Responding to some of the earlier questions:

- The Xbox version controls have been great, aside from the slow ladder/rope climbing as noted by the reviewer. My 5 1/2 year old plays with me and he can move and switch characters just fine (though the puzzles are too tough for him).
- There are achievements on the Xbox version, like the Steam version.

I'm not sure why would anyone play this on the Wii if they had an Xbox.

I enjoyed parts of the game but unfortunately the ending is a real let-down. I still enjoyed playing it mainly because I liked the graphics but there really is no real ending at all.