The Book of Unwritten Tales: The Critter Chronicles

Hey there, adventure gamer! Remember the good old days when your favorite genre was funnier than a car full of clowns crashing into a kazoo factory? Ok, while it doesn't take much to top that colorful feat, you've got to admit you miss the days of The Secret of Monkey Island at least a little bit. Here to soothe those old wounds is KING Art with its release of The Book of Unwritten Tales: The Critter Chronicles, a prequel to The Book of Unwritten Tales that goes all-out for some fantastic laughs, never sacrificing a solid puzzle in the process. 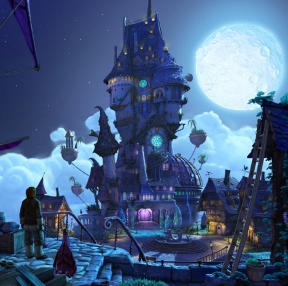 Meet Nate Bonnett, an airship "captain" who sounds like Bruce Campbell and doesn't know the ship's stern from the disapproving look his mother always gave him. Not that it really matters, though, because he's being chased by a bounty hunter who claims he stole the ship from a fat pirate and she's going to bring it back for the reward. That little claim of hers is pretty much the truth, but Nate's not gonna sit around and let her play winner. He's going to fight back. With confetti and cotton balls!

Before you know it, Nate wakes up bound to the ceiling in an ice cave with a totally real and legit yeti preparing to turn him into a stew. And then Critter walks by. Those of you who played the first Unwritten Tales game will recognize Critter and should be delighted to know The Critter Chronicles features quite a bit of the little guy (and his kin) wobbling about on the cold wastelands. In fact, after controlling Nate for the first chapter, most of the game switches between main characters, allowing you to see and interact with two sides of the story, not to mention Critter's own woes. 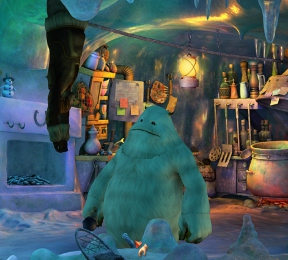 Analysis: For the most part, The Critter Chronicles is structured like a standard adventure game, complete with inventory puzzles, clicking things to examine them, and lots of great dialogue. There are some great additions to the experience that make it a decidedly more casual affair, including a few mini-games and the always handy "press [spacebar] to see what you can click on so you don't have to pixel hunt and wear your mouse button out" feature.

Humor is definitely the most appealing aspect of The Critter Chronicles. The jokes are almost as frequent as a sitcom, but it's much more than a few one liners belted together with a crude story. Expect parodies both large and subtle, jokes that break the fourth wall, scenes ripped and contorted from Star Wars and Harry Potter, and plenty of things that will make you roll your eyes in comical exasperation. Critter Chronicles is very well-written, from the humor to the storyline, and that quickly becomes a sticking point to keep you glued to the game.

Apart from its phenomenal presentation and surprisingly awesome voice work, The Critter Chronicles is actually a solid adventure game. Imagine that! The puzzles may seem a little obtuse at times (like the confetti thing near the beginning), but once you settle in to the game's quirky rhythm, things begin to make a lot more sense. Get ready for half a day of hilarity wrapped around some great adventure gaming moments!

Windows:
Download the demo Get the full version (via GOG)

Mac OS X:
Download the demo Get the full version (via GOG)

The Book of Unwritten Tales: The Critter Chronicles Walkthrough

The Book of Unwritten Tales: The Critter Chronicles Walkthrough

To find the unknown "Symbol" you need to

use Powder on Mirror in Capitan Cabin