The Book of Legends

Maybe the best person for the job isn't just "whoever's cheap and available", but I guess if your solution to dealing with an ancient evil is "put it to sleep for a few decades rather than making with the stabbies" the chips are stacked against you to begin with. Jordan might be a powerful warrior, but he's also powerfully lazy. And greedy. And kind of weird. On the first day of his mission to The House of Fear to deal with the demon Azutura, Jordan manages to lose the very relic he needs to do the job. Of course, once he manages to track it down, everything's easy-peasy and the world is saved for sure!... right? The Book of Legends is a massive turn-based indie RPG adventure from Aldorlea Games that delivers tons of play time, laughs, fantasy, excitement, and the ability to join forces with chickens, cows, ponies, and more. 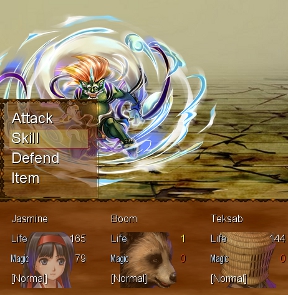 The game controls with either the keyboard or the mouse. You can use the [arrow] keys to move, [spacebar] to select and [ESC] to open the menu, or simply do everything by clicking. While you can see some enemies on the map, most encounters are random and take place with traditional turn-based style combat, duking it out and leveling up to get stronger and learn new abilities. Though initially your party only consists of Jordan, over time you'll get the chance to gather many more companions. I say chance because your choices here have a big impact on who will join up with you, from wild forest chickens to haughty warrior princesses. You can even flat-out turn certain characters away from you. (Note that if certain party members appear to be removed from your group during story events, you can simply add them back by selecting "Party" to edit your group from the menu.) 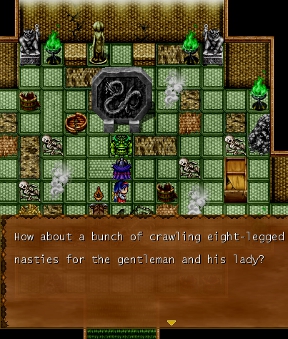 Analysis: Heavy on fun and gags and light on brooding anti-heroes and drama, The Book of Legends is the perfect choice if you're looking for a big, meaty RPG without all that crushing seriousness. Though we are talking about a title dealing with a demon war and the end of the world, the chatty cast and colourful design combined with a near-endless stream of self-aware jokes makes for a very light-hearted experience. Of course, this also means it isn't a game for players who don't like a lot of smalltalk or prefer games with a more serious tone. The Book of Legends is, from time to time, one seriously weird little game, but in this case that's part of its charm. It likes to stroll absurd situations and statements right out as if they were the most natural thing in the world. Not all the jokes are winners, but the game's whimsical spirit is a welcome change from your typical dead-serious RPGs. It's just such a relentlessly cheerful, vibrant game that it's hard to really be in a bad mood while you play it.

Another point in its favour is that The Book of Legends is a genuinely huge game that will take you a long, long time to finish. The downside is that those huge sprawling dungeons can also be a pain to explore at times. Their own size works against them without a map, especially when so much of the terrain can look the alike in certain areas, though mercifully once you clear certain dungeons you have the option to just "go through" if you're trying to get from point A to point B. In addition to the main quest, you've got a lot of side jobs you can do if you venture off the beaten path. You'll definitely want to, since there are characters you can only recruit if you explore. Though the writing occasionally feels a little stiff, it works exceptionally hard to make your party feel like a lively bunch of characters. They'll strike up conversations with each other ranging from chatty to snippy, make observations about everything from your surroundings to objects you find or examine, and it goes a long way towards endearing them to you. Except for maybe Jordan himself who, despite moments of heroism, kind of comes off as a bit more of a lazy jerk of a sleazebag than a hero should, even intentionally. Sort of what you'd get if Vash the Stampede, Q, the cast of Jersey Shore, and the worst qualities of the Magician Howl were struck by lightning and fused together.

For fans of classic turn-based RPGs who really embrace grinding and strategy, The Book of Legends will keep you wrapped up a very long time indeed. There's just so much to see and do, from the vast world and huge dungeons to explore to the hefty roster of potential party recruits, that the immense dedicate and pride the developers clearly take in their work shines. It's a love letter to old-school gaming, with a decidedly quirky and happy-go-lucky style, and with its long multi-battle boss fights, will even provide a challenge too. Give the demo a try, and for goodness sakes... the next time you pick a random slob off the street to save the world, at least Google them or check their reviews on Yelp first. If "making friends with woodland animals" and "dressing really elaborately" are listed as higher priority than "not letting the world be consumed by darkness and terror", maybe you should reconsider outsourcing the world's future.

This has to be my favourite game released this year. One thing you didn't mention in your review (which I really enjoyed by the way) is the huge replay value. It's not only that you can choose different people to join you; there are also 3 "goodies" on the developer's site which let you play with various casts of characters that aren't possible in the regular game - it's almost like playing 4 different games.

I agree with you that the dedication and pride of the developers shine through; it's there in all the small details as well as the more obvious stuff. IMO, this is a truly brilliant game.

I played this game and I recommend it, excellent stuff.

Must be because they loved the game so much.

I agree that this is an excellent game. A real must-have. Loved the story, the characters, the chance to use strategy and the split party battles. A great twist in the story at the end.