They say police officers can get married to their job, and nobody knows that better than Keith. He's a fantastic detective, but a cold one, whose callous attitude fails to endear him to the media. When he's ordered to take a leave of absence, his wife Helena thinks they'll finally have some time to spend together as they tour an old castle on vacation, but there's still a gulf between them she can't seem to get past. Keith doesn't think much of it, but Helena's almost at the end of her rope... but they might never get the chance to talk about it. In Uri's free indie horror adventure The Boogie Man, translated by vgperson, Keith wakes up their first night at the castle to find his wife and the rest of the tour group missing. It's the work of a theatrical maniac calling himself The Boogie Man, and unless Keith can stop him, he's going to slaughter his way through the rest of the castle. With full English voice acting, the return of familiar faces from Uri's previous games, and a creep-tastic thriller plot, The Boogie Man is a return to Uri's dark and gory roots, with five endings to find... though only one of them is a happily ever after! It's a tense game of cat and mouse, with plot twists and exciting sequences aplenty, though some frustratingly unintuitive gameplay mars some creative and impressive work. 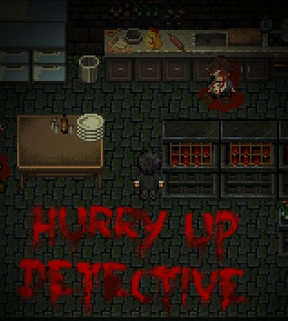 Move with the [arrow] keys and interact with [Z], using [ESC] to open the menu and save your game whenever you wish... maybe in different slots if you plan on getting the game's only good ending? In fact, you'll need to perform a lot of specific actions throughout the game in order to get it, so consider thinking outside the box and exploring everywhere you can rather than just being lead in one direction. Some items you find can be used in certain situations, so just open the menu, go to your inventory, and use them from there. If you're stuck, trying interacting with your environment in different ways, like pushing things around. Unfortunately, not only is the map a pain to navigate since room perspectives don't line up properly with the way you enter them, but so many of the clues and requirements for getting anything other than a bad ending are frustratingly vague. You need to make a habit out of checking, double-checking, and triple-checking objects at different times, even if you aren't prompted to do so, or re-trying something that doesn't appear to work. Still, The Boogie Man definitely showcases far and away some of Uri's most creative, elaborate work, and the thought and time gone into crafting so many startling events is more than a little amazing. 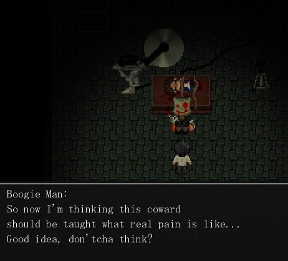 The Boogie Man's strength is in its story, which offers up a lot of great closure and expansion on characters from The Sandman and The Crooked Man, while also delivering some wonderfully creepy moments. Keith makes for an interesting hero, in that he's so drastically different from Uri's other protagonists. He's competent, cool, and collected, almost to a fault, and yet while others call him emotionless or oblivious, it's actually clear he cares a great deal even if he doesn't express it as readily or clearly as others. Learning about why Keith is the way he is, as well is what makes him tick, makes The Boogie Man an appealing character study for the "hard boiled detective" archetype. The Boogie Man isn't actually a scary game in the traditional sense, though it has some great atmosphere. It's more "Saw" or "Scream" than "Pan's Labyrinth", in other words, which isn't to say it's a bad game at all, just a distinct shift in tone and atmosphere. The Boogie Man is much gorier than some of Uri's other titles, and creative deaths abound. Though some performances are stronger than others, by and large the voice acting is well done, and the presence of so much of it is a little stunning in a free indie download. Even if you get the best ending, in which some twists you'll likely see coming, not everything about the plot is wrapped up as neatly as you might hope. There's a reason for that, however, and while you may be champing at the bit for the final installment in Uri's series whenever that arrives, The Boogie Man is a tense, clever, emotional game well worth a few hours on a dark and stormy night.