[Note: This game is available in "Pay What You Want" format, including free. If you enjoy this game, support your indie developers and consider paying them what you can for it!]

[Note: Please note The Blind Griffin deals with some subject matter some people may find upsetting.

Made for NaNoReNo 2015, Asphodel Quartet's free indie otome visual novel The Blind Griffin starts off in San Francisco during the roaring twenties, and your parents would really rather you, the youngest daughter of a large Chinese family, settled down and got yourself married. That's not the life you wanted for yourself, but with few job opportunities, you're running low on funds and choices... until strange signs lead you to a candy shop that happens to be a front for a very special speakeasy. You start off bartending, but you quickly discover there's something a little magical afoot, not just about your bewitching coworkers, and soon you find yourself with a surprising challenge... prove you have what it takes to be a magician, something you had no idea you were until that night, and take the exam administered by the Grand Council, or have your memory, and your newfound magic, stripped away. You'll need to choose a mentor from three of your fellow coworkers (who all happen to be eligible bachelors, of course), and work hard to take your exam in a few months time. With snappy writing, gorgeous visuals, and welcome diversity (though unfortunately all romantic options are hetero only), The Blind Griffin is cheeky good fun with polish that belies its short development time. 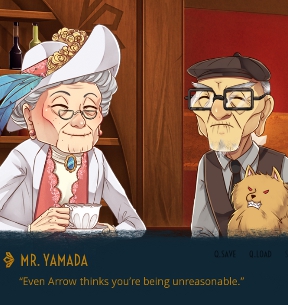 Playing The Blind Griffin is easy even if you don't watch the in-game tutorial... just click to advance text and make choices, and right-click to open the menu to save and load your game whenever you want. Considering the time period, it's no surprise that some slang might be more antiquated than others, so just click a bright gold word when you see it to open the glossary to learn what it means. The Blind Griffin will go a long time before you see your first choice, which essentially locks you into a route (and thus potential rrrrrrrrromance) with either Giovanni, Alexei, or Emilio, and your choices with them determine which of the game's ten possible endings you get, some of which are extremely dark. Though you might think you're initially going to be playing for quite some time before the exam, the narrative leaps forward a great deal, usually a few days at a time, but sometimes weeks and months. While it's understandable given the game's short development time, it does make aspects of the plot feel rushed, and it would have been nice to have the opportunity to have non-straight romances with Vivienne and Marie as well instead of the three guys, though that the two women are there at all is fantastic given the underserved and underrepresented people they come from. It feels sort of like Asphodel Quartet have just cracked the cover open on a book for us to peek at a few pages, and hopefully they open it up in future games to explore the characters and themes inside it more fully. The '20s aesthetic is beautifully represented here with a swanky soundtrack and gorgeous artwork that makes not only the cast but their surroundings feel vibrant and lively. If you're craving an otome game that piles on choices and decisions, you might find The Blind Griffin a little light on interaction for you, but it's still a fun and sweet game with a cast of characters we hopefully get to see a lot more of in the future.

Hey everyone, I'd like some input on a tag I was uncertain as to whether to add to this game.

Marie is a transgender woman, and a positive character, though she doesn't feature prominently in the story in the same capacity as the male romantic leads. Do you think this is enough to warrant an lgbtq tag even though there are no options as such for you as the player?

I think it is.

For me, when I'm looking for games or stories that deal with an important issue like that, it helps when even the lighter-weight instances of it are tagged/easily findable.

Awesome game, but man, those bad endings are really bad.

Also, I have found the game very well researched, at least, the Russian side of it.