They say the quickest way to a man's heart is through his stomach, but you and I both know that's a lie because going right through the chest is way more efficient. The man in this case, however, happens to be the king of a twisted world, and within his heart lies the power to make or create all of existence... so it's probably not a great thing that it was ripped out of him by a creature straight out of nightmares called "The Final". And it's probably not great for the universe that all the ones who are going to try to get it back aren't exactly heroes... or anyone you'd want to meet in a dark anywhere... or even people at all. Created over the span of seven years by one man, Andrés Borghi, who handled everything about it from the programming to the art and more, The Black Heart is a fantastic free indie fighting game with a surreal dark horror theme and style. Please be warned that this game contains excessive gore and violence as well as some implications that some players may find disturbing. (Note: If you want to play in English instead of the default Spanish, click the second button from the top in the launcher (Idioma) to change the language.) 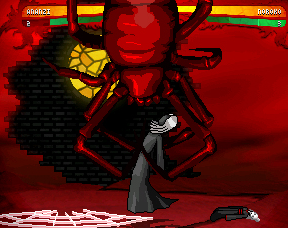 There are six characters for you to choose from, each with their own unique backstory and moveset, from the ghostly spectre of Noroko who was released from her prison inside a Japanese fertility doll, to the chaos-dwelling Shar-Maki serpent monster that can grow stronger in size and number by implanting embryos within its foes. The default playstyle has you use the [arrow] keys to move and [Z], [X], [C] and [A], [S], [D] to attack, but this can be changed in the options menu in-game. Controllers work too! If you've played a versus-style one-on-one fighter before, you know the score. Win two out of three matches against an opponent to move on to the next. The yellow bar on the left at the top of the screen is your character's health, while the one on the right is your opponent's. Deal damage to build up the green power meter below your health to be able to pull off super attacks, enter Killer Mode, or even execute instant fatalities. Hit [ALT+Enter] if you want to play in windowed mode. 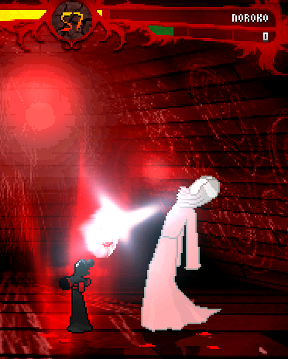 Analysis: Though its description only mentions Mortal Kombat or Street Fighter, thematically at least The Black Heart is much closer to Darkstalkers by way of infamous Playstation fighter Thrill Kill. (Which I promise you was not anywhere near as fun to play as it was to talk about.) It's over-the-top violent in a way that goes beyond simply yanking a guy's head clean off his shoulders, to say nothing of implied sexual assault. But if excessive gore doesn't bother you, chances are you'll find The Black Heart an extremely creative and enjoyable, if very dark, gem. The unique characters shine, with original stories and ideas, and seeing each of their moves in combat is a great incentive. I mean, you'll probably never want to root for any of them to have the power to control all existence, but still. The hand-drawn artwork and animations in battle infuses them with tremendous personality, making each one feel unique to play as well depending on your personal style, so you can find one that fits you. The cutscenes introducing them are so intriguing that it's a bit of a disappointment that you don't get more story throughout the game instead of only at the very end. Also, you uh. Might want to know that at least one of Noroko's victory scenes includes a jump scare. 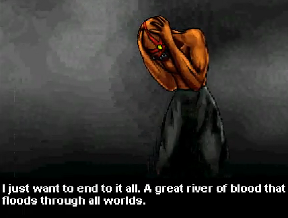 As for the gameplay itself, well, I confess. I'm a button masher. It's what I do, and it's served me well. That said, the controls feel responsive and it's easy to pull off moves when you know what you're doing. Especially since the same sets of button/key sequences are shared by all of the characters for most special moves. It does feel like it's a little easy to simply stun-lock several characters in a corner and wail away on them without interruption, but it also seems like that only gets you so far. Inevitably, the game is going to force you to battle against "yourself" (or at least the character you're playing as), and if you've been cheerfully bulldozing your way through by blind luck, you're going to hit a brick wall against something that not only knows all your moves, but can pull them off every time. What's frustrating, however, is the lack of a pause function. All you can do is exit to the main menu, which wipes your progress through story mode, and not all of us can play an entire campaign in a single sitting without bathroom breaks. Or getting a phone call. Or needing to take screenshots.

To think that all of this is the work of a single person over seven years is a bit shocking, but you can feel the drive and passion in every single aspect of The Black Heart. It's clear that it was a game created with dedication from someone who enjoys fighting games as much as fans do. The story is more than a little convoluted and will probably require playing through with most characters to understand it all, and some characters have vastly more satisfying endings than others. Still, sporting a cast of incredibly varied characters and over-the-top action, certain players will find this a ton of fun, even if it's impossible to describe it to other people without sounding like a lunatic.

So apparently there is a trojan horse in the download file?
http://prntscr.com/16mu2s
Uh, if nobody can clear this up I'll just delete it for now.

AVG is known for its false positives. I have several programs from anti-virus to malware and spyware and there is nothing wrong with the file.

Actually there's a pause function, it's the Pause Break on the keyboard.