Even the most positive person in the world would probably have difficulty interpreting the sun permanently halting in the sky as anything other than a bad sign. As Stoic's stunning indie RPG strategy game The Banner Saga begins, a new truce between the human kingdom and giant varl is being tested with both the immoveable day and the return of the massive armored creatures known as the dredge. Throughout the game, you'll play everyone from a varl tax collector to a widowed hunter and his daughter, and their stories will come together in unexpected ways depending on the choices you make throughout the course of the game. (Note that while the game is available through several digital stores, it is only playable through Steam.) 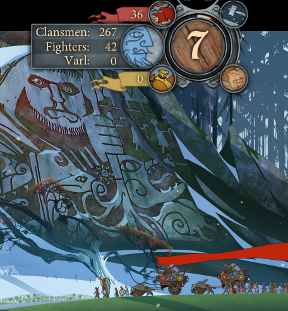 Though the game attempts to have some simulation aspects at least as relates to making sure your army has enough food so that they don't wind up marching over the starved corpses of their fellow soldiers as they days progress (a sure downer), your army isn't as important as you might think. Occasionally, you'll encounter massive groups of enemy forces that you can have your unnamed soldiers deal with via a text option or two, but you can also choose to engage the enemy yourself with your main party for greater rewards. Since the game's turn-based combat is how you earn Renown, which is used for everything from buying supplies and items to promoting your party, there's rarely a situation where handling things yourself isn't a good idea in the long run. Especially since there's a finite amount of it, as there are a limited amount of predetermined battles in the game with no way to grind more.

The game's turn-based battles take place on a grid, using the party of heroes you've gathered so far, and whoever you've selected to take part. Strength acts not only as a determining factor in how much damage you deal, but also as your hit points. It makes defense all the more important, both in keeping you alive and knowing when to go after an enemy's shields instead of their throat, since if you reduce the stat significantly you can take down even towering foes with weaker characters. Willpower can even be spent to strengthen attacks or move farther on the battlefield. Each character belongs to a certain class that dictates the abilities they have, and after a certain number of kills, you can spend Renown to increase their rank and make them stronger. 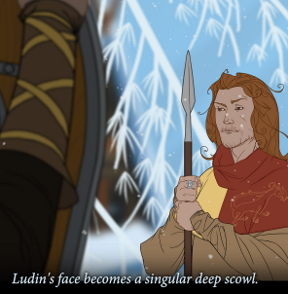 Analysis: Because of its on-rails progression, The Banner Saga feeds you its world and characters bit by bit, just enough to keep you intrigued for the next piece. The lack of any sort of "lore" menu is sorely missed, since it would have both helped keep track of who's who and all the places mentioned, but also fleshed out the world a great deal. It puts the focus squarely on the characters and politics you deal with to carry the story, and largely, they succeed with flying colours. You'll make and lose both friends and enemies, and it's impossible not to feel both responsible and genuinely at a loss when someone dies as a result of your decisions. They have so much personality and can illustrate complex relationships and alliances with just a few lines. It's just a shame that the art doesn't always match what the text is describing. There are some scenes that would be better served emotionally by more dynamic, varied illustrations, even if just changing expressions. Come on, Ludin, you were just nearly beat to death... aren't you even a little roughed up?... no? Still want to look like you smelled a fart, huh? *sigh* Alright then. 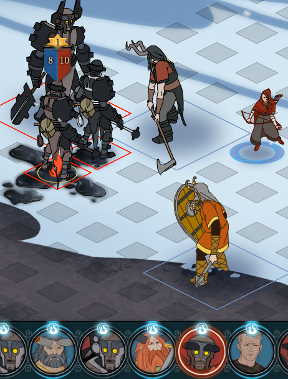 As challenging as the combat can be, I actually found it far less stressful once I realized I wasn't dealing with the Fire Emblem-style perma-death for fallen characters I had honestly expected. Battles feel satisfyingly strategic, though the difference between "normal" and "easy" modes of difficulty is so vast you might as well have called the latter "baby's first turn-based strategy". Where you move your characters and how you choose to attack with them feels like it has real weight, and once you figure out how to make strength and defense work for you even when the odds seem to be against it, every character feels useful. On the other hand, the limited Renown in the game is odd, and having characters only level up according to killshots makes the game fiddly if you don't want to wind up with a slew of weaklings and two or three power-houses.

Rather than calling it an RPG, however, you might be closer to accuracy if you called it a visual-novel mixed with turn-based strategy. The Banner Saga is still a slow burn of a game with a heavy focus on combat, but sucks you in with its rich world of gradually unfolding mythology. It's about people as much as it is saving the world from giant evil monsters, and it's a case you'll grow to care about, especially since you decisions have real consequences down the line. An argument might lead to the death of a party member. Failing to punish a soldier acting out could put the entire army in danger. Conflicts big and small play out along the path you walk, and the result is a big, meaty game you'll slowly sink deeper into the more time you spend with it. The lack of a demo is a shame, since the game could definitely win some of the hearts of those who might still be on the fence, but The Banner Saga is an incredibly ambitious and satisfyingly challenging game with a grand scope and breathtaking presentation.