The Ballads of Reemus: When the Bed Bites

The Kingdom of Fredicus is a place that loves its heroes. Unfortunately, Reemus, exterminator extraordinaire and overshadowed brother to the local dragon slayer, is having trouble convincing the populace that he deserves a little undying adulation. Sure, later in life he'll have Several Journeys to prove his bravery against invading death slugs. Right now, though, it's early in his adventure gaming career, and even after his first minimal-property-damaging bug slaying, he's have trouble getting people listen to the glorifying ballads written by his faithful bear companion, Liam. So a-questing he goes, in search of glory, gratitude, and, most importantly, a soft bed. It's The Ballads of Reemus: When the Bed Bites, the first premium downloadable adventure game in the popular Reemus series, produced by Click Shake Games! And while the anticipation may have driven us all a little buggy, it was totally worth it. 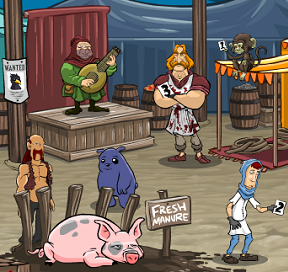 Controls should be familiar to most point-and-click players. Click the screen to interact with objects, talk to other characters, or move Reemus and Liam around. If you wish to use an object in your inventory, click it, and then where you would like to attempt to use it. Occasionally there will be sections where Reemus and Liam split up. You'll switch between the characters by clicking the icon in the top right corner. The gear icon brings up the display and audio options, including whether you like voice acting, word balloons, or both. Your progress is automatically saved. Purchasing The Ballads of Reemus: When the Bed Bites grants you access to both the browser and download versions of the same game. Also available is a Special Edition featuring a signed CD of the game, a T-Shirt, Stickers, and the game's soundtrack.

Analysis: Developers making the leap from free to paid-for often face a hard-sell to the gamers of the internet. Succeeding requires the game to have ambition: ambition in aesthetics, in programming, in presentation, and in scope. Zeebarf and Steve Castro then, must be some heck-of ambitious designers, since The Ballads of Reemus is everything that the fans of the series could hope for. Like a well-made big budget TV show movie adaptation, The Ballads of Reemus has the familiar flavor and humor of the original series, but scaled-up and unafraid to fix what needs to be fixed. 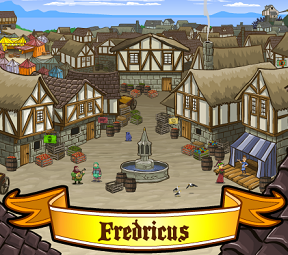 First of all, the art of Reemus's world is absolutely awesome, typical for Zeebarf's work. It should be no surprise that the creator of The Visitor series knows how to design a score of ghoulishly wacky creatures, but it's his flora, not fauna which is the most interesting. Infusing personality into mere plant life cannot be an easy thing, but from the delicious looking Ice Cream Cactus, to the unappealing Halitosis Bush, to the unsettling Swamp Blisters, the world is populated with a forest of wonderful creations. Almost paradoxically, while the plotting tends more to the slice-of-life comedy genre than the epic-adventuring parody flavor of Journeys (at least at first), it makes the world feel bigger, not smaller. We get to see so many locations and meet so many characters that Fredicus becomes the kind of fantasy world that, like Discworld, feels lived-in, if that makes any sense: a place that, while fantastic and peppered with modern pop-culture jokes, makes you forget that it's a recently created place rather than something from a classic goofy fairy tale. 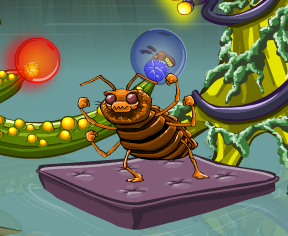 Of course, the shiniest graphics in the world would be lacking without the writing to back it up. On this point, The Ballads of Reemus, also shines. The dialogue is well-crafted and the characters all sparkle with personality. There is a funny response for nearly everything you would try to do, always a mark of developers that have taken their time to do a job right. The puzzles do have that shade of adventure game illogic to them (though the solutions often make a perfect skewed sense in retrospect, even when you've clicked them out by brute force). That said, the challenge level is low, and even if players get frustrated, its unlikely they'll be seriously stuck.

Another feature worth mentioning is the new inclusion of voice-acting, most of which is very good. Of course, they probably won't be the voices you have for the characters in your head, but they'll grow on you. This reviewer has already mentioned his desire for Josh Tomar to walk around and narrate stuff in his everyday life, but he delivers a manic performance as Reemus that is surprisingly fitting, and helps to keep the quicken the pace when the game needs it. The rest of the cast is no less impressive, especially Zeebarf himself as Liam, and Dave Dunham as Waldorf the Bard. On the other hand, the musical score, though it has a large number of tracks and the right eerie faux-medieval feel, can get repetitive, especially if you remain at a single screen to work on a puzzle for a long period of time.

The Ballads of Remus is the complete package, perfect for both fans and newcomers alike. It's just the right length for a ten dollar game, and with it's optional quests and easter eggs, will keep adventurers entertained for hours. Whatever the form you play it in, its charm will undoubtedly exterminate your boredom.

Play The Ballads of Reemus: Demo

The Ballads of Reemus: When the Bed Bites Walkthrough now available!

The Ballads of Reemus: When the Bed Bites Walkthrough

The Ballad of Reemus

The Ballad of the Lovebirds

The Ballad of the Moth: Poster Piece Locations

The Ballad of The Thieving Bear: Honeycomb Piece Locations

The Ballad of the Butterfly

The Ballad of the Seagull: Headstone Piece Locations

Bedroom (inside the Pub)

The Ballad of the Crushed Bugs: Hidden Bug Locations

The last bug #47 is found during the roll of the credits at the end of the game.

Solution: Sweat it Away!

Reemus's View: Outside the Exterminators

The Ballads of Reemus: When the Bed Bites Walkthrough

The Ballad of Reemus

The Ballad of the Lovebirds

The Ballad of the Moth: Poster Piece Locations

The Ballad of The Thieving Bear: Honeycomb Piece Locations

The Ballad of the Butterfly

The Ballad of the Seagull: Headstone Piece Locations

Bedroom (inside the Pub)

The Ballad of the Crushed Bugs: Hidden Bug Locations

The last bug #47 is found during the roll of the credits at the end of the game.

Solution: Sweat it Away!

Reemus's View: Outside the Exterminators

I've never really bothered to play any of the Reemus series but could someone explain to me why exactly is it rated orange?

cookie: I've only played one other version (it was posted here in a linkdump or some other such post recently), so I'm not 100% sure, but I would guess it's because of some mild gore/blood.

Oh thank you for the info! Guess I could try this game out if it's just mild

Does it really work on Linux? It only says windows on their website.

I... I always imagined Liam's voice as being higher than that.

CookieCommando:
Some mild gore and violence (mostly against fantastic creatures), some innuendo, and a fair deal of alcohol references. Just one reviewers opinion, but orange seems to be the best fit.

I presumed that the in-browser flash version would play fine on any system that would play such games. Not sure about the downloadable version, though there is no difference in content.

Great game. Also love how JIG let's you play demos online rather than having to download them.

The full game needs to be purchased.

The walkthrough is useless unless you can play the entire game.