The Babysitter "Tower of Dreams" Walkthrough

If you ever need a taste of what it's like to be a babysitter, you could potentially test the waters with The Babysitter. If you don't want to be a babysitter, that's okay, too. This game provides a decent amount of gameplay, chock full of puzzles, and interesting character interactions. 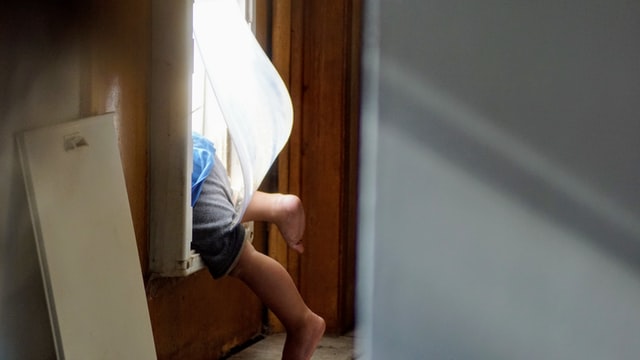 If you ever need a taste of what it's like to be a babysitter, you could potentially test the waters with The Babysitter. If you don't want to be a babysitter, that's okay, too. This game provides a decent amount of gameplay, chock full of puzzles, and interesting character interactions.

This walkthrough will cover the third and last level of The Babysitter, called the Tower of Dreams.

The Tower of Dreams Walkthrough
As the final stage in The Babysitter, this level tends to be more challenging than the first two. There are more steps involved in solving steps to puzzles and more distractions.

Phase I: NADROT, Switches, and Orbs
In this room, you need to step on the letters NADROT in order. Step on them as you go up the rows, then go above the 4th row, over to O and step on it, then down between the third and fourth row, then up onto the T to unlock the dialog with the dragon.

After talking to the dragon, go over to the "machine" from Johan's room. Position yourself either in front or below it. You'll see a switch; hit the switch. The switch will open the gate at the top of the screen so you can exit the room.

To flip the three switches in the middle, start by going down and back up quickly to trigger them. Then run down and hide between the barrel and the railing until a boulder goes by. Then run down and hide by the red button. Once the boulders go by, run up and press the switch furthest to the left, then hide by the red button. A boulder will fall in the hole.

Now run over to the middle switch, hit it, then run and hide by the red button. After a second boulder has fallen, run to the switch farthest to the right and hit it before the boulder goes over the trap door. Then run to the right. All the boulders should fall.

Phase II: The Maze
The next screen is a maze. It's simple to solve. The trick is just to make sure you move the dog ahead of you.

The maze on the next screen will shift every few seconds. If you can't get where you're going, just get close and wait until it shifts. You will have to get the key from the chest on the middle right first, then the bottom left, then open the door at the bottom. Open the grate to let Buddy through, then go up the stairs.

Phase III: Circuits and Teleporters
On the next screen, you need to lose six games of rock, paper, scissors in a row, but you need to choose the losing play from the row in front of you quickly. If you lose six in a row, there's a cut scene. Watch it, then push the button on the front of the machine again to open the gate.

In the next room, there's a computer to play with. After picking a certain option, you will be back in the room with another character. Use the bottom character to push one of the blue buttons and the top character to disconnect each circuit at the top. You'll have to move the top character in front of each one. You'll have to match all six buttons with all six circuits without getting one pair wrong to get them all disconnected. The pairs are:

This is the end scene. There are several possible endings, but I won't spoil them.

Final Words
Just another ordinary day at The Babysitter's Club, right? Eh, not really. If you aren't familiar with the first two parts of the game, Johan's Room and The Village, you'll find that they aren't as difficult as The Tower of Dreams. The second part of the game is you just pushing a pig around. You will still need to think creatively, though, as you can see, some of the answers to these puzzles don't follow ordinary logic, e.g., losing at rock-paper-scissors, etc.