The Apocalyptic Game About Penguins 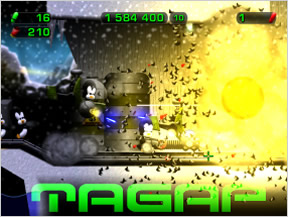 Just released from Penguin DT is a downloadable action packed platforming extravaganza (Windows). After three and a half years of development - TAGAP is out. What's TAGAP? It's The Apocalyptic Game About Penguins.

While a scientist in "a distant research facility" (New Zealand) discovers a penguin genome, one of the penguin test subjects breaks loose. Soon he's blasting his way through the waking army of undead mindless zombie penguins in a struggle to overthrow the impending penguin apocalypse. The story fills itself in from there, but the crux of the game centers on good old fashioned platform jumping, and the decimation of penguins.

Use the mouse to aim, left-click to fire; use the keyboard to move. You will come across eight weapons, each with its own secondary fire (accessible by a right-click). The twin Uzi's can fire in two directions at once. The shotgun is also a grenade launcher. The plasma gun acts as a shield. Using the flame thrower, you can set the floors on fire and oh, so much more. That's even before you get to pilot a helicopter.

TAGAP has great graphics, and enough violence to be satisfying but not enough to be gory. It has thumping tunes from start to finish. It's difficult, its challenging and is ultimately rewarding. TAGAP also comes with a level editor with which you can build your own levels and even cut scenes. With an optional (and also free) download, you can get the 70-minute original game soundtrack, and there's still more.

Analysis: From the moment the game begins, it becomes obvious just how much work has been put into this game. On the downside, however, I also get the feeling that the developers themselves played it all through testing, increasing the difficulty as they progressed to keep it challenging for them. That leaves us with a very steep learning curve, even in easy mode. A lot of the levels become swamped with all manner of creatures and as a novice, it's easy to use up your "cool" ammunition too soon and be left with the dangerously underpowered Uzi.

That said, there are definitely breather portions in the game and the satisfaction of overcoming such difficult sections is incredible. The game frequently surprises and there is always something new to experience just around the corner. Perhaps the easy mode could have been just a little more so, but never the less, TAGAP is a highly recommended game play experience. And it's free. =)

Heh, how can you have a game about penguins without a Linux version?

Agreed with Cale, also the PC thing is a misleading tag since Linux also runs on PC... just a note ;)

You may want to fix the picture, Jay, to show these great graphics.

ymihere - send me a better picture and I'll put one up. :)

I, too, thought it was funny that a game with penguins is for windows only.

Wah... everything except the background shows up as white block-figures, making it very difficult to play.

I forgot to add earlier, this sounds a lot like Blob Wars: Metal Blob Solid as far as the gameplay goes. That one is for mac and PC (that includes windows and Linux.) It is a fun little game as well and totally free!

~Same as MadWithMuchHeart its just white blocks and the background, whats the problem.

I agree with MadWithMuchHeart... wah.

My first thought was my pretend Vista themes which has given me trouble with GTA2 and Unreal Tournament but now I suspect we might have both picked a bad mirror with an older version?

I got mine from GamersHell. Where did you get yours?

There's an FAQ, which answers the white block question, at: http://tagap.net/faq_1.htm

Even having found the FAQ, I couldn't solve the problem. I tried installing an updated driver but my computer was not happy about the attempt. Maybe others will have more luck.

No, what I meant is that the picture that I see is only about one pixel wide. I'm not sure if everyone else sees it like that, or if it's supposed to be like that, but that's how it appears on my computer.

Hehehe, a game about penguins that doesn't work on Linux... And I'm also having the "1-pixel" image problem.

I'm on an Intel Mac and the game runs fine, even in Parallels without a reboot.

I swear to you guys, there's an image there.

If you want a different one, I've got thousands of them, it took that long to pick the most awesome (unfortunately some good ones were mid-death)... er...

But yes, many hours, days even, went into selecting and prettifying the one you see (or not so) here.

The image as it should be is here: https://jayisgames.com/images/tagap.jpg Perhaps loading it in full will rectify the issue? Hope so.

Alas, the FAQ points out that this is only designed for Windows XP and up. No love for Win2k users. :(

It has to be noted that there's a kill counter next to your score at the top of the screen. At certain points, you get health pills, speed pills, megafire powerups, and when you max out the meter, it resets, and gives you a life pill.

Hopefully this will assist with you folks who are having a rough time surviving.....as you can easily back up to a wall and mow down penguins until the meter helps you out. However, this will work against you if you're trying to go for a speed run, but by then you're already familiar with the stages anyway, and won't need the added help.

Oh right. The megafire powerup increases the lethality of your weapon during a limited time, in ways unique to the weapon that you happen to be wielding. For instance, your uzis will start shooting in a spray formation, and the shotgun's blast range widens to....the entire half of the screen that your gun is pointing at. I think these bonuses also apply to secondary fire (right click), so go nuts and experiment while you're going Rambo on everybody. You don't use more ammo than you usually do though, so it's win/win for you and death/doom for whoever happens to be attacking you.

too bad it's more than 90 meg!!!
i come to JIG for small cuddly cool games, that can be played on dialup modem connection speeds...

OMG. You have to play through the game at least once, no matter how hard it is (even on easy). There's at least one (if not several) super awesome level that will make you feel like screaming at the top of your lungs like a Spartan as you mow down penguins.

The probable cause of the picture in this review not being viewable is that the box with the pic in it is too small. The picture's loading just fine.

Oops, I just caught that. Thanks weirdguy. :)

WOOT!!! PENGUIN TIEM! All in all, an excellent game, but the difficulty ramps up WAY too fast.