Ahoy, mateys! I be here to tell you the gruesome tale of The Adventures of Mary Ann: Lucky Pirates! It be— ahem, it is a match-3 game that combines three methods of puzzle gameplay with casino games to create an adventure of near-epic proportions. The game itself takes place along a Caribbean that exists only in tall tales and Disney movies. Your job is to help Mary Ann defeat all enemies and find all treasures until she rules the Pirate world. 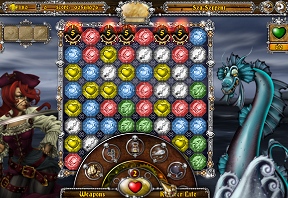 The match-3 dynamics are the basic "swap" style of match-3 familiar to anyone who has played Bejeweled. However, in The Adventures of Mary Ann you will find this played out three ways: a simple "break the tiles" type, a "clear the path to the treasure" type, and a rousing exploration/combat mode that is the heart of the game. Each scenario has its own rewards and challenges, and you have to be able to make it through all three types to complete the game.

The first two types of match-3 games are straightforward enough, featuring special tiles that are more difficult to move or match. It is the "explore/battle" scenarios, however, that elevate the gaming experience to pure strategy. Enter an uncharted area with a particular goal: find a certain number of items or simply defeat a certain number of enemies. Uncharted means exactly that; moving across the water allows you to uncover tiles that house treasure, artifacts, extra sailors, and lots and lots of enemies that need to be fought, as well as treacherous reefs that can cause major damage. Encounter a bad guy and battle mode engages a head-to-head match-3 between yourself and the enemy, be it a pirate frigate, a ghost ship, a giant squid, or a sea monster. 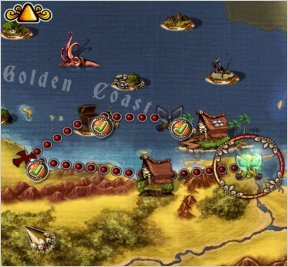 Rather than being a simple Puzzle Quest clone with "you each take a turn and the more matches you make the more damage you do" gameplay, The Adventures of Mary Ann: Lucky Pirates has created a unique strategy game by turning the tiles themselves into weapons and making them customizable. There are 21 different types of tiles (or battle pieces as the game calls them), each with its own strength and weakness. Some are more effective against live opponents (squids, octopus, sea monsters), others are more effective against pirate ships, and there are a few that are very effective against ghost ships. Other battle pieces don't inflict damage but help in other ways, such as adding to your health, your crew, or your ability to blow the other guy out of the water. But here's the catch: you can only have seven battle pieces active in a match grid, and once the battle has begun, there's no changing it. Your first decision before wandering around is to think "What type of enemy am I likely to encounter, and what pieces should I activate that will help the most in this level?"

Additionally, there are skulls in each puzzle that, if your opponent gets them to the bottom of the puzzle, can do serious damage to you. Making a combination next to one of these skulls can increase their potency (if the enemy does it) or decrease it if you can manage it. So you have to decide, should you go for a maximum hit? Try to match hearts to bring up your flagging health? Or match whatever is near the skulls to neutralize the threat before the enemy can drive them to the bottom of the grid. Add to all of this are extra weapons that you can use to attack an enemy between rounds of match-3. It is this strategic turn that turns a simple match-3 game into something approaching a game of chess.

And, if you get tired of all the match-3 wackiness, find the leisure islands and kick back and enjoy casino games such as slots, wheel of fortune, and video poker. Not to mention the keno islands that can occasionally be found in the explore/battle scenarios. Gambling in the casinos is so like the real thing you might find yourself wondering where the waitress is with your free cocktail. 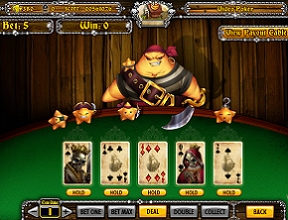 Analysis: Gameplay in The Adventures of Mary Ann is simple to master, especially if you are familiar with the match-3 genre. Early levels include a tutorial that will walk you through challenges and explain all the artifacts, battle pieces, power-ups, etc. that can be found. Two modes of play are available, timed and untimed, depending on your mood and abilities. Once the map starts to open up you can go in several different directions and encounter even more areas to explore. And if you get a bit tired of the match-3 madness you can skip directly to one of the casino islands (once you've found them) to relax and gamble away your hard-won booty.

Visually The Adventures of Mary Ann: Lucky Pirates is stunning. There are, however, a lot of games these days with killer graphics, so what makes this one different? The details. Details such as pirate ships that have bound, blind-folded Care Bears strapped to their prows, the shadows of carrion birds that pass across the basic match-3 games, the animated and nasty vermin in the treasure grids, the list goes on and on. All in all a ton of attention has been paid to make this game look absolutely beautiful and tickle your funny bone at the same time.

If there is any complaint, though, it is that the makers have thrown everything but the kitchen sink into Mary Ann. There are objects that can be used to help navigate the battle scene waters, power ups that can be used in the basic and treasure modes, additional weapons that can be used on opponents in-between battle match-3 rounds, and of course the battle pieces themselves. An inventory of everything available covers four full page screens, making inventory control in the later stages of the game a bit daunting. There's also not much story here, help Mary Ann defeat the pirates, the end.

The Adventures of Mary Ann: Lucky Pirates is something that will give you hours and hours of satisfying casual gameplay, with the ability to customize battles and switch between timed and un-timed modes. Have fun replaying over and over again!

I hate games from Big Fish because they're all repackages of other, better games or one of the endless piles of lame hidden-object games. However, there has been a serious lack of Puzzle Quest clones out there and this game looks and plays great. The pirate theme works. I think it's probably better than the official sequel to PQ (Galactrix).

Don't be hatin on big fish or hidden object games, I happen to like them both. To each their own you could say. As for this one, I agree it works great and gives fans of the puzzle quest something new to get excited about.

When I first looked at this game, I thought it sounded too similar to the other Puzzle Quest clone with pirates, Sea Journey. This one's got a lot more "stuff" in it, which is a good thing. Sea Journey is much more like Puzzle Quest.

There's a lot to like here, but the game seems WAY too easy. Most battles are won with me barely taking any damage, and extra turns are so easy (just need four in a row) that many of the battles are finished with my enemy never even getting a turn.

Enemy AI seems completely haphazard, there's no effort on the computer's part to maximize damage (it's actually quite difficult for the enemy to damage you at all, which is really bizarre) or to defend themselves.

Nice to look at and a lot of neat stuff, butthe gameplay lacks badly.

Yes, good game. I found myself staying up for hours playing this. The visual style and the sounds are great. also I love the gambling.

HOWEVER, I AGREE THIS GAME IS TOO EASY. WAY TOO EASY!!

All in all, it's quite enjoyable.

This game is available for mac, and plays quite nicely on it

Fun game for a while, but far too easy. Becomes repetitive quickly. Same mini-games all over again without much difficulty increase. No real direction either to let the user know how far until their ultimate goal.