Taking a few cues from classic animated games like Dragon's Lair and Space Ace, The Act from React Entertainment puts you in the clumsy shoes of Edgar, the humble window washer who has to save his job, rescue his brother, and pretend to be a doctor, all while doing his best to get the girl in the end. How does he do all of this? Not with style or finesse, but with blind luck. And a little help from your iPhone swiping skills! 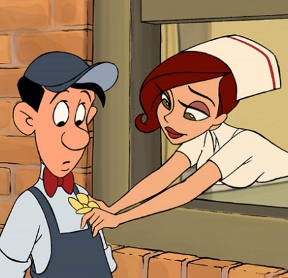 The Act both looks and feels like a classic cartoon, complete with over the top physical gags, a clueless protagonist, and crazy situations that you'd never find in real life. At certain points in the story, the action switches from movie to a game scene. Here, your goal is to help Edgar make the best of his current situation, whether that be wooing the lovely Sylvia or cooling the temper of an angry boss. When the action begins, pay close attention to Edgar's movements and how each character reacts to his mood. Body language is key!

You accomplish all of these tasks by balancing Edgar's show of emotions between timidness and brashness. Swiping left on the screen makes Edgar back off from the situation, often inviting the other character he's interacting with to step forward. Swiping right encourages Edgar to be bold, a move you have to carefully meter lest you frighten the other party away. If you fail three times in a scene, you have to restart it. You don't lose any progress, but if you want Edgar's day to be as perfect as possible, failure is not an option! 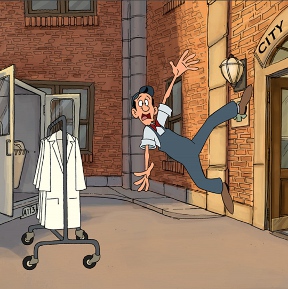 Analysis: The Act is short, featuring only about half an hour of gameplay, not including any replays you might be inclined to do. This might make you turn your nose and look elsewhere for a longer experience, but don't mistake brevity for a lack of quality. In its short time on your screen, The Act will capture your attention and turn you into a detail hound, scrutinizing the characters you see while you root for Edgar the underdog. And even when the end credits roll, you'll sit back, appreciate the experience, and hope React Entertainment delivers more in the future!

The Act takes a huge risk by ditching any sort of heads-up display, leaving you alone with invisible controls that directly affect Edgar's interactions with the world. While this makes things a bit more like guesswork than precision gaming, it also allows you to focus on the characters themselves, reading their body language and trying your best to be a socially aware cluemaster. This "blind" gameplay does have a few drawbacks, especially in those scenes where you'll fumble and fumble without knowing exactly what to do, but in the end, The Act is a better experience because of its invisible input. Interacting with people is not an exact science, and The Act mimics the real life interplay of emotions quite well, even in its quirky cartoon setting.

The Act is a game you want to experience at least once. The animations are fluid and detailed, the story is quirky and interesting, and the gameplay elements, while minimal, are subtle and meaningful. It's not an in-your-face modern gaming experience where you get to smash buttons to destroy things, but it does manage to convey subtle emotions and encourage you to interact with virtual characters appropriately, adding a wonderful layer of immersion that's quite rare in games today.

The Act Strategy Guide and Tips

Scene 4: Edgar and the Doctors

Scene 9: Save the Boss

So happy to see this is finally being released. When the original developers shut their doors in 2007, I thought this thing was going to be lost to the gaming world. Just shows you can't keep great animation down.

Oh my god it's so annoying, I'm stuck at the part where he has to stop his boss from choking and I just can't figure it out! Help please, where's the walkthrough??

Please don't panic, the walkthrough is in the works.

Don't get too aggressive in trying to help him or he will panic. First try to move so you can put your hands on his shoulders and then progress slowly from there. Ultimately, he will end up on the floor and spit it out.

That was by far the most difficult scene in the game. I somehow stumbled through it when I played, but Jazz's advice is good.

Also, keep the following in mind:

Make frequent, wide swipes to the far left and far right. No point in being subtle when someone's life is on the line, right? The key is to pause after a few swipes so Edgar can adjust his grip.

The Act Strategy Guide and Tips

Scene 4: Edgar and the Doctors

Scene 9: Save the Boss

I am suck at this game but I really like the game lol.
I am stuck with the doctors. What should I do when one of me slap my back?

It's ok for that to happen because one of the comments in the game is that sometimes friends slap friends on the back. That means you are being accepted by that doctor, so keep up the good work. BTW, I wouldn't suggest trying to do the same to him. ;)

Which way do you swipe to get him to cough up his cigar in save the boss?

Try both directions to see what works best for you. If you need more help, you might want to check out the walkthrough above the comments.

When the lady gets mad, and they are sitting on the white table together, and Edgar has the flower, what do I do? Please show video or just comment.

I think you are talking about the Break Room, so you might want to take a look at Scene 8 in the Main Walkthrough of the Strategy Guide above the comments.