Everybody knows the Moon is made of cheese, one of the most precious and delicious things we know. So it's no wonder we want to protect it from all sorts of alien invasions. In That's My Moon, a thrilling space shooter, you're in charge of blasting the baddies right out of your orbit. That's one small step for man, one giant leap for cheese preservation. 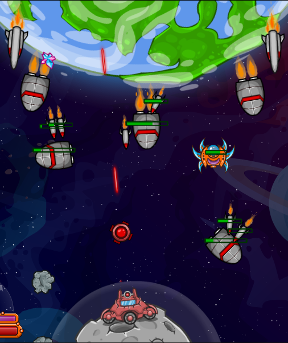 This is a defence game, meaning that you stay on the Moon and are only able to move from side to side. The gameplay is mostly mouse-driven: your space cannon thingy shoots automatically wherever you point your cursor. Use the left click to pick up coins, weapons and power-ups. This is a bit of a pain at the beginning, since your cursor has a rather small scope, but a few upgrades will fix that. Finally, press the [spacebar] to launch an anti-gravity shield and push the enemies away for a while. There are two bars to be filled, the energy bar and your cannon's health. These can be replenished by picking up power-ups which randomly fly across the screen. The weapons system is peculiar in that you don't choose which one you want to use before you start playing. Instead, you start with the weakest one, and then others (again, randomly) float in during the level, and you can choose whether you want to pick them up. This allows a change of tactics mid-level as well as more versatility in the gameplay. Each of your assets, from weapons to coin combos, can be upgraded twice, and the upgrades dramatically affect the outcome. 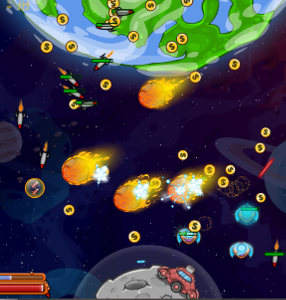 With only fifteen levels, That's My Moon can seem short, but this actually allows the game to stay fresh and avoid becoming repetitive. The flurry of space rockets, lasers and meteors keeps things dynamic and gives the game that old school arcade feeling. Difficulty might seem uneven in places, but replaying a level or two to get more money for upgrades doesn't pose a problem. However, if you do this, you might run out of upgrades to buy a few levels before the end. A few more options wouldn't have gone amiss, but That's My Moon certainly seems complete even without them. This is a highly addictive shooter, what with its bright, colourful graphics and smooth mechanics – there was a gleeful glint in my eyes when I caused a brilliant meteor shower to sweep my enemies off the screen. After all, we have but one Moon, and we intend to keep it.

I found the levels terribly long and boring. I Hated having to click to pick up coins and bonuses and did not like not being able to select my weapons.

Also irritating was discovering that all weapons got a 15% bonus for playing on sogood.com.

Gave up around level 8 and probably will not go back to this one.

I don't agree. I enjoy to play this game and it's a common way to pick bonuses and add intensity to the game.
For the bonus from Sogood.com, it's usual to have something in more on the sponsoring website. Keep in mind games can cost a lot (over $20k).

Would be better if you could use keyboard to aim and the mouse to collect. At present, it juts gets annoying not being able to do both at the same time...

Well as I said, for me, I find better to use only the mouse because sometimes you need to do a choice between collect bonuses or aim.

I liked the graphics and vibrant colors used. Though the game became repetitive after first level. Also the missiles are really irritating to kill. May be its difficult could be tweaked.