The stately grandfather of all falling-block puzzle games and widely considered the most popular game of all time, Alexey Pazhitnov's Tetris needs no introduction. 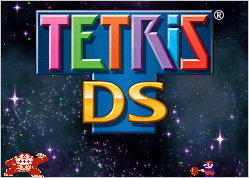 The recent appearance on the Nintendo DS does the franchise proud, with solid online support and a wide variety of solo modes, despite some fundamental missteps that may frustrate long time players. Here is a breakdown of the different game modes available in Nintendo's latest Tetris game:

Standard Mode: Mario-themed traditional Tetris. There are three options in this mode. Marathon mode is no frills Tetris; clear lines as tetrominos fall ever faster. Although you are limited to 20 levels at first, endless play cam be unlocked by clearing 200 lines and watching the credits. In Line Clear mode you simply have to clear 25 lines. For those without Wi-Fi access, VS CPU mode lets you face a computer controlled player in head to head Tetris. 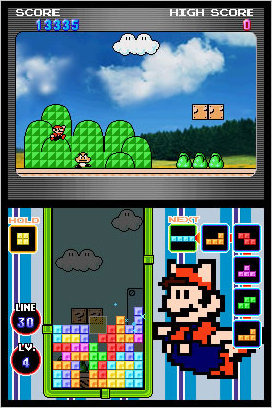 Mission Mode: The Legend of Zelda's Link is the star of Mission mode. You will have to perform various tasks such as using a specific block to clear a certain number of lines or clearing a line at an arbitrary height, in marathon mode or within a time limit.

Push Mode: The only new mode available in multiplayer, Push mode is set in Donkey Kong's tower and is a two player game (or 1 player versus CPU). The well is twice as long as usual and it has no floor or ceiling; your blocks fall from the top of the screen down and your opponents blocks fall from the bottom up. There are two static blocks in the center to start building off of and that cannot be cleared. Clearing multiple lines at once will push the stack of blocks towards your opponent and, as in Standard mode, if the blocks reach the top of your screen you will lose.

Touch Mode: Like Push Mode, the Balloon Fight themed Touch mode makes use of the unique features of the DS. Unfortunately, while Push Mode is an inventive and fun game that couldn't be as successfully implemented on other consoles, Touch Mode feels a bit gimmicky. Each level begins with a well full of tetrominos. Use the stylus to move or rotate tetrominos and clear lines as you attempt to lower a crate full of balloons to the floor. A Touch Puzzle mode is also available.

Catch Mode: Metroid's Samus is featured in the creative Catch Mode. You begin with a plus shaped block that you can rotate to catch falling tetrominos. Form a 4x4 block to start a detonation timer, which clears itself and surrounding blocks. You can trigger the detonation early by pressing [X] which can be useful for destroying the life sapping Metroids that occasionally float down. The game ends if you run out of life or if your collection becomes too large to fit on the lower screen.

Puzzle Mode: In each of the 200 puzzles in this Yoshi themed mode you'll drop a predefined group of blocks into the well in whatever order and rotation you like. Logical thinking and foresight (or guesswork and dumb luck) replace the faster paced, instinctual gameplay of most of the other modes.

Wi-Fi Mode: 2 Player Versus, 4 Player Versus with Items, and 2 Player Push modes are available online. As with Mario Kart, you'll need to exchange friend codes if you want to meet a friend online.

Multiplayer Mode: Local play is more flexible, with the ability to set handicaps and teams as well as toggle items. Amazingly, up to 10 players can play locally with a single cart.

Analysis: Nintendo fans will love the appearances of famous and obscure 8-bit characters, music and backgrounds, though it is strange that such a visually nostalgic game doesn't allow you to disable certain gameplay options for a truly old-school experience. Unlike the NES and Gameboy editions that many gamers are familiar with, the next block preview has been increased to 5, and you can now store a block in reserve with the [L button]. Most importantly, you can now move or rotate a piece endlessly once it comes into contact with the bottom of the well or another tetromino. Known as infinite spin, this controversial feature makes it possible to stall forever and, though using it in multiplayer will guarantee a loss as the other player hits you with line after line of blocks, it does make single player mode much easier. However, even if the exotic modes don't interest you and you can't stand infinite spin, the foolproof Wi-Fi support makes Tetris DS worthwhile.

Of course Tetris DS is not available on the web, although you can download a demo from DS demo kiosks at the Nintendo World and elsewhere. Still, I would be remiss in leaving you without something to do after reading this far so enjoy this twist on Pazhitnov's quintessential puzzler instead.

I have three words: my friend code.

It's worth the download and pretty fun all round.

Possibly, most likely next weekend.

I'm really enjoying this game, but online Wifi seems plagued with disconnectors and you can't keep playing with 3 people. I like that the online play has a ranking that goes down when you disconnect.

Why are we doing non-web games all of the sudden? I've enjoyed this as the place to go to find out what is worth playing online, not for a nintendo advertisement.

Sorry to disappoint you, James, but have a look through the archives. Really, nothing has changed. ;)

Did someone say Friend Code??

If your playing this game on wifi, be sure to check out blockstats.org. It can help you track your progress!

you get rated for the number of lines cleared

I would like to know why everyone is dissing this game for not letting you turn off infinite spin and the hold space.

The game doesn't let you turn these things off, but I was thinking and I have in idea for you all. DON'T USE THEM!

If your going to complain about a feature that requires you to use something other that the D-Pad and the main 4 buttons, then your stupid. If you don't like using infinite spin, DON'T USE IT!

Honestly, you aren't forced to keep pressing B over and over again. In almost every review I've read for this game, somebody have mentioned these two items. Can anyone tell me why this is?