Nitrome has a new game out, and it's a sequel to one of their most popular puzzle platformer series. Test Subject Complete picks up where Test Subject Blue and Test Subject Green left off: you're still the little blue blob of enzyme in a kickin' mech suit. The stakes are higher, though. Your suit's been spying on Doctor Nastidious, see, and it turns out that he's planning on using you to take over the world. Your only option is to get out before he puts his nefarious plan into motion. 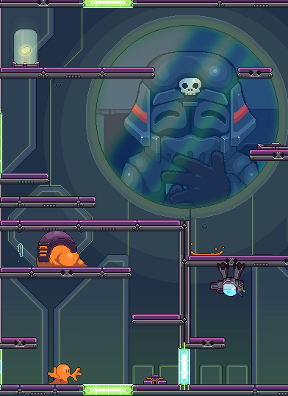 The gameplay hasn't changed much since the previous installments in the series: use the [arrows] or [WASD] to move, and [spacebar] to fire your blaster. However, now you can walk on the ceilings by jumping up against them. The portals transport you while conserving your momentum, the lasers and enemies kill you (but you'll get better!), and the buttons toggle or disable lasers and portals. The goal is still to grab the key and then head to the exit, where you'll *glomp* onto your target and get sucked into the next level.

Nitrome has really taken feedback from the previous games in the series to heart, and has fixed most of the really annoying problems in the form of this awesome new suit. Now your blaster fires without delay, and the movement is much less finicky than it was before. The upshot of these fixes is that the challenge of Test Subject Complete is primarily in the puzzles and the wide array of enemies, not in trying to find the exact pixel to aim for in order to reach the next platform, making for a satisfying chapter of a well-loved series... about a little blue ball of goop. Ew.

I found this game really enjoyable, despite the slow text (which I hope could've been sped up by some shortcut key or something).

Plot wise, the game was not bad. Smooth story flow spread over 30 levels, very understandable story with some short cutscenes as breaks. Loved it.

Gameplay wise, the difficulty is just there. Some of them need you to think how to proceed, and the layout of save points is comfortably spaced out while still being a challenge. Some observation skills help as well to see where you'll exit next if you enter the portal.

Controls were comfortable to use, no need to jump all the way from the edge just to land on the other.

The death animation takes waaaaaaay too long, though. And at some parts where it almost seems inevitable that you have to die, it does get really annoying waiting for you to regenerate and all.

Overall, a game that is worth at least playing through once in whole.

Can't get past the checkpoint in Level 20. I think I'm supposed to

use the green button to turn off the portals overhead long enough to get past them, but I can't figure out how to do that so that I have enough time to get past them before the timer runs out or the machine (The Eye of Sauron, as I like to call it) blasts me.

Why do I hate Nitrome games so much, they are all slow and sluggish and this is no exception

a *shrug* and move on from me on this one

It is odd though, that there is not one of their games I have really enjoyed, I am sure a mod will correct me if I have rated differently but pretty sure I have not rated these since I cant stand most of them ...

I completed the boss, then:

In the room at the end where you have 30 seconds to escape, I pressed reset and I did not appear at the start.

In the end I had to quit and now I have to defeat Dr. Nastidious

Correction to the above spoiler:

*Now I have to defeat Dr. Nastidious all over again!

"despite the slow text"

HopefulNebula, I think you should add lot of stuff to your review. If you, at least, complete level 7, oyou'll find that the REAL gameplay of the game is not the gameplay of the first levels.

Why you haven't written all that? Seriously, some games require more than 3 levels of gameplay.

[Hi FaultLiner. I've added spoilers to your comment so they don't inadvertently ruin the surprise of the game, which I think is what Nebula herself was trying to avoid. ;) -Editor.]

I haven't enjoyed Nitrome games in quite a while.

So to see another game from a series I liked, and then improved control wise and whatnot, just makes me over the moon. :)

Bout halfway through at the moment and I can already feel that it's infinitely less infuriating to play timing and control wise, thank the lord they fixed that.