Shark Jump Studios' innocuous looking little indie puzzle game Test Chamber, also available on Android and iOS with a free demo, wants to break your brain in the cutest way possible. You control a tiny little block-headed fellow in a world where the laws of reality have begun to unravel, causing the world to wrap around itself... which, uh, is technically what the world does, but is a little weirder here when you can walk to the bottom of the screen and pop out the top, or see another version of yourself mirroring your movements. You're off to try to find the infinite world, even if few others believe it exists, but what's going on with that dark stranger who follows you in silence? Use [WASD] or the [arrow] keys to move around, use the [spacebar] to interact with people, and hold or tap [Q] to undo or rewind your actions. For the most part, you'll be pushing blocks around to help you reach the exit in each stage, though blocks connect and react in different ways. If you just push a block off the side of the world, it'll fall into the void, but if it's used to bridge a gap that it can touch on the other side, it'll plop neatly in place. Some blocks may be connected by bars that will lock them together, while others will be in unbreakable stacks. What you need to do is figure out how to make them, and the unique properties of the world, work for you in order to get you where you want to go. You'll be awarded a medal based on how many steps/moves it takes you to complete a stage, but you can use as many as you need if you don't care about fancy achievements. Once the game starts throwing in things like the moving terrain, you'll have your hands full just getting to the end, nevermind the amount of steps it takes you to get there. 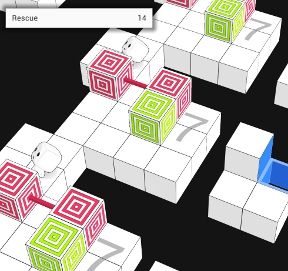 Part of the pleasure in solving Test Chamber is how small and well designed its levels are. Their solutions typically don't take very long to pull off once you spot them, but getting there is an exercise in wrapping your brain around, um, how the wrapping works. Most of the time the story is just sort of hanging out on the periphery, acting as a sort of vague framework to give the mechanics context and setting, but the game's level design is strong enough that doesn't really matter. You may wish it developed its plot and setting a little more to really flesh out its scenario because the potential is there, and the game does largely come down to simply pushing blocks. While it does introduce new obstacles, like the force fields that blocks can pass through while you cannot, largely it's focused on making the sort of mind-bending puzzles that look impossibly complex but turn out to be sneakily simple. While Test Chamber plays fine on mobile devices, the controls feel a little clunky... you tap and drag on your character in the direction you want to go, and it winds up imprecise and kludgy in a way that will make you have to rewind a step or three more than once. At 28 levels, Test Chamber represents a comfortable amount of time that doesn't wear out its welcome, and is a solid choice for players who want something simple in concept but challenging in execution, wrapped up in an appealingly sleek little package.

Probably just me. But after about level 5, I had to use walkthroughs. I did a few that way and gave up.

I really enjoyed this game on iOS, but was very disappointed at the the high price for such a short game. They promise there will be user-made levels in future, and I hope that eventuates.

Does anyone know the gimmick required to get gold on level 15 "Portal"? The par for gold is 7 steps, but even if you could jump the gap it's a minimum of 9 steps.